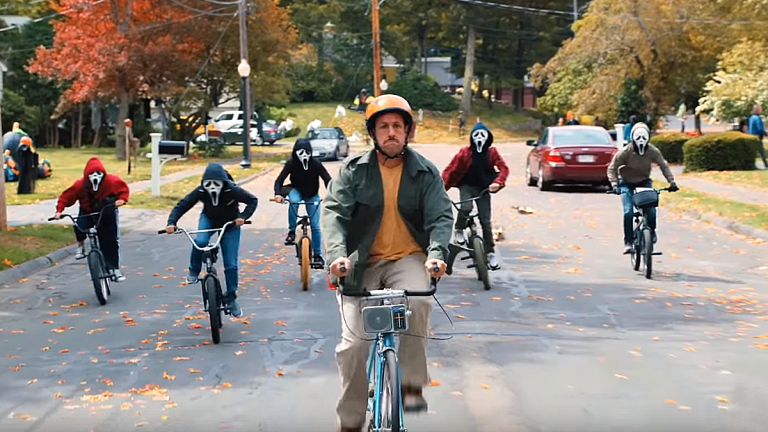 When Adam Sandler entered the Oscar race in 2019 for Uncut Gems, he made the humorous threat that “If they don’t nominate me for this, I will come back and make the worst movie in the history of cinema.” Well, the Academy failed to live up to their end of the bargain, so it seems that Sandler has decided to follow through on his ultimatum, as the trailer for his upcoming Netflix comedy Hubie Halloween looks as if it is Sandler’s ultimate revenge.

Halloween is a big deal in the town of Salem, Massachusetts, and no one takes it more seriously than Hubie Dubois (Sandler). The resident Halloween nut, Hubie’s sole mission in life is to make sure that everyone celebrates the joyful holiday safely and abides by the rules. But when a mysterious new neighbor moves into town, a criminal escapes police custody, and actual monsters start making townsfolk disappear, it is up to Hubie to convince the police and his neighbors of the danger they face, and to save the town and the holiday he loves so dearly.

I’m going to be honest, I’ve never seen a trailer like this. It’s almost daring the audience to have a visceral response. I mean, it’s an amalgamation of everything Sandler has done to date, in ways both good and bad. Sandler’s accent is the same as he’s been doing since The Waterboy (despite his current age of 54), the cast includes a long list of previous cohorts, including Rob Schneider, Colin Quinn, Tim Meadows, Kenan Thompson, Steve Buscemi, Kenan Thompson, Ray Liotta, Maya Rudolph, Shaquille O’Neal, former Happy Gilmore star Julie Bowen, and As Always, Kevin James. It’s the Most Adam Sandler Movie Ever Made, and…I’m not mad about it?

Look, I’m not going to pretend that Sandler has made a good comedy in the past decade. Most of them have been pretty bad. But there’s a certain unique charm in their badness. I enjoy Just Go With It a surprising amount, Sandler’s last comedy Murder Mystery was enjoyably average, and the only truly bad film he’s made in the last decade was his dramatic outing The Cobbler. I’m also intrigued by the concept of a film that’s sole purpose seems to be “f*ck you, Academy, this is for the fans.” I can’t wait to watch this train wreck. Hubie Halloween will premiere on Netflix October 7th. You can watch the trailer below.