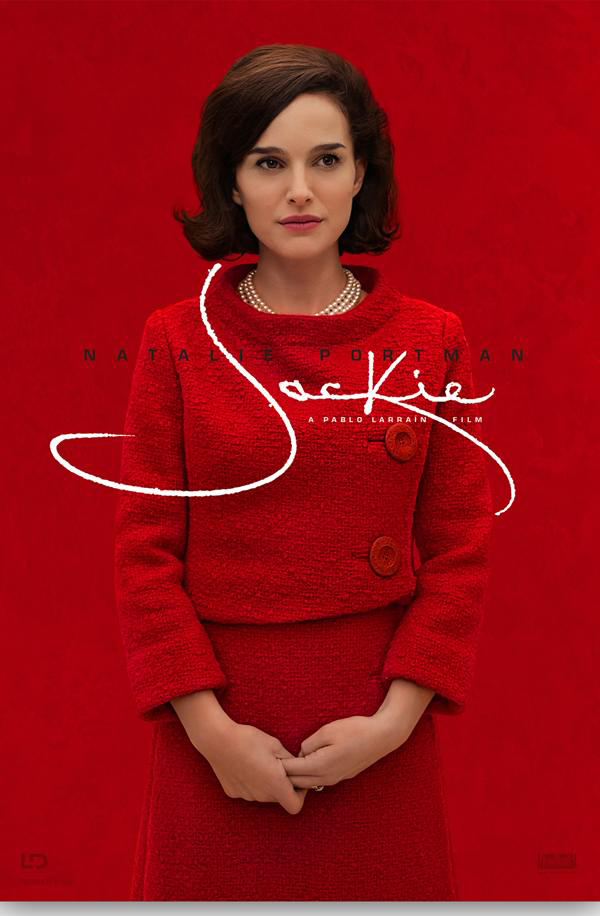 There are some films that feature performances so transcendent, you forget you are watching a movie and begin to believe you are seeing a real person. On occasion these performances can come from fiction, but more often than not, these types of roles come from biopics and historical dramas. It’s still a very short list of actors and artists who can master such a feat, with the only readily available recent examples being Daniel Day-Lewis in Lincoln and David Oyelowo in Selma. However, it is beyond a shadow of a doubt that Natalie Portman has added her name to this list, as her performance in Jackie is so astounding, so triumphant, and so powerful, it is almost impossible to see anyone on that screen than Jackie Kennedy herself as you watch the drama unfold.

November 1963 is one of the darkest periods in American history. John F. Kennedy, a figurehead of America, was struck down in his prime by an assassin’s bullet. The following weeks, as the drama unfurled and one of the grandest funerals in modern history was held, helped to secure not only hope for the future, but Kennedy’s legacy as one of our greatest presidents. However, what much of the country forgets is that while they were mourning a president, the woman holding the funeral was also mourning her beloved husband. And so begins Jackie, a film following Jacqueline Kennedy’s (Portman) longest month, as she grieves her husband, begins moving her children out of the White House, plans her husband’s funeral, plots her legacy, laments to a priest, speaks with a reporter, and just tries to hold herself together.

This is a film about legacy. What is a legacy? How do we secure one, earned or otherwise? Jackie Kennedy, despite the popular perception that she was some beautiful trophy wife with an odd voice, was really a master strategist. Ever conscious of the fact that any misstep of the planning of her husband’s funeral, any misspoken word to the press, any out of place smile or furrowed brow could be interpreted incorrectly, she took control of studying Abraham Lincoln’s funeral arrangements and formatting Kennedy’s around it, hoping to turn the idealistic young progressive who only served for three years into our country’s ideal hero. John F. Kennedy may have been our King Arthur of Camelot, but he only achieved this title because Jackie is both our Guenivere and our Thomas Mallory, both the woman who inspired the leader and the one who wrote down and created his legacy for generations to come. This is a film that explores how she did just that, and it is astounding to watch her work.

The idea of legacy is furthered by the fact that this entire film is designed to look as if it’s fashioned in Mrs. Kennedy’s mind. She is present in every scene of the movie, the film is chopped as if it is a series of memories, jumping around devoid of time or order, as a grieving woman must consider her past, her present, and her future all at once. It at first presents a shocking, fever-dream style reality, but soon settles in, showing us both a glimpse inside the mind of an enigmatic and important figure as well as a glimpse inside a world of fame, history-making, and grief. Director Pablo Larraín’s filmmaking elevate an already strong screenplay by Noah Oppenheim in order to create this strange, painful world in which our heroine existed in an all too painful way. If, as Jackie claims, her goal was to create a fairy tale, so the people had someone to believe in, then this film has its cake and eats it too: creating a realistic world filled with behind-the-scenes drama, while also assisting in the mythmaking, crafting Jackie Kennedy as a legendary figure who existed in a much simpler time, when our government was filled with people we idolized and our country continued to grow and progress. It creates one of the most heartbreaking films of the year, while also being one of the most uplifting, in an odd sort of way.

Of course, none of this works if you don’t have the right actress in the center of it all. It takes a lot to be able to play one of history’s most recent and recognizable heroines, give an audience a glimpse inside her mind, perform onscreen for almost every single second of the movie, and sell it with such a force that it feels new and different. The fact Portman pulls it off is remarkable. Sure, it may take a second to adjust to her accent, but that’s because she’s actually using the distinct voice of the former First Lady (it’s hard to explain exactly what it sounds like, so I suggest you Google it. It sounds unsettling at first, but the more you let it sit with you, the more calming and enigmatic it becomes). Portman so puts herself into this role, every movement and every facial tic makes you believe you are seeing the intimate moments of Mrs. Kennedy’s life. An extreme close-up on Portman’s face as she tearfully wipes away blood and tears stands to be the image of the year, and a scene of Kennedy boozily wandering around the White House while popping pills and playing the song “Camelot” is one of the greatest scenes of the past ten. Portman is an Academy Award-winning actress, but here she feels like a fresh find who is proving her worth in an all-out tour de force.

The rest of the ensemble is filled with a who’s who of character actors, ranging from great to overcompensating. Otherwise great actors who struggle with the accents and overall weight of the figures they are playing include Peter Sarsgaard and John Carroll Lynch, who portray Robert Kennedy and President Lyndon Johnson competently, but not affectingly. Much stronger are actors Greta Gerwig as Jackie’s long-serving aide-de-camp Nancy Tuckerman, who serves as the First Lady’s rock during the most trying time of her thirty-four years, Billy Crudup as reporter Theodore White, who’s interview with Mrs. Kennedy serves as the main framing device of the film, and who provides the role with a journalist’s eye and an inspired idolization, and John Hurt as Father McSorley, a priest who provides Jackie with philosophical discussions and a desire to hope again. And a special shout out to Sunnie Pelant and the Weinberg twins, who have very minor roles as Caroline and Jack, Jr., but serve as not only competent child actors, but excellent stand-ins for two of the most famous First Family members of all time.

I do want to take one moment to acknowledge the score. Mica Levi’s score has receive an equal mixture of acclaim and scorn from critics’ circles. It’s decidedly not the uplifting score you expect from a biopic, nor is it the graceful score you’d expect from a film about a Kennedy. If you ask me, Ms. Levi has crafted a brilliant score that benefits certain scenes, but also hinders others. It’s a fascinating work, which seems to take the graceful score you’d expect from a film of this magnitude and distorts it, giving it a mournful, almost horrific distortion. It fits into the themes of grief and framing that the film loves to explore, but also is incredibly jarring at other moments. I give her kudos for trying something different, while also a plea to rein it in for future endeavors, so as not to tarnish the overall effect.

Jackie is a study of how the American Myth was built. It’s about how people can overcome tragic catastrophes with poise, grace, and careful manipulation. However, it’s also about grief, and if our flaws will outlive our triumphs after our deaths. It’s a film about many things, but it all boils down to how this affects one woman. One woman who, at age thirty-four, had to endure the cameras, the fame, the glamour, the heartbreak, the heartache, and the overall acceptance of a lifetime, whether she wanted it or not. As she states near the end of the film, “I never wanted fame. I just became a Kennedy.” Well, as history shows us, she did receive the fame, and she set a course that defined the legacy of her husband, her nation, and herself. And thanks to Portman, Larraín, Oppenheim, and a team of talented actors and crew members, that legacy now seems secure.