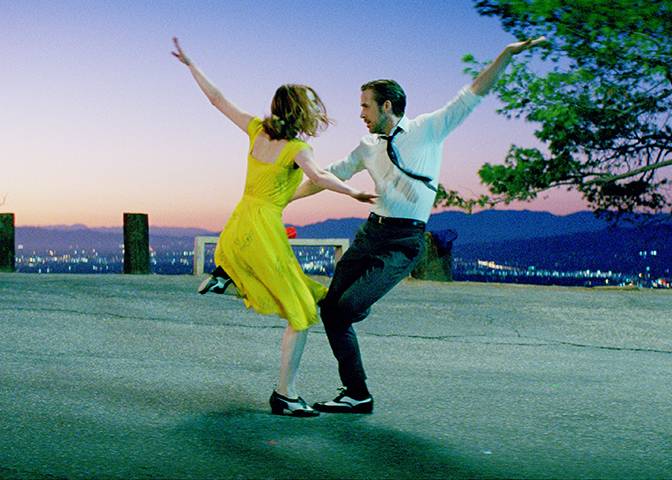 I realized I loved La La Land long before Ryan Gosling and Emma Stone shared their first kiss. I realized it before Gosling plays “Take On Me” on the keytar. It was in the opening moments, when people stuck in traffic jump out of their cars and dance up the freeway. It’s this type of magic that Damien Chazelle has captured in his quest to bring back the musical, and it is in that moment that you realize he’s captured the very soul of why we enjoy going to the movies. Of course, it’s also at that moment he grabs a hold of your emotions and begins tugging at them, tuning them like a tightly wound piano. He’s managed to craft a film that’s personal and universal, profound and entertaining, energetic and soulful, all at the same time. In essence, the fact he managed to make any of this work is a miracle, and the fact it works so well is a testament to a master craftsman.

After a definitively not-meet cute, Mia (Stone), a barista/aspiring actress, begins a relationship with Sebastian (Gosling), a cover band pianist/aspiring jazz pianist. The film follows them, through song, over the course of a year of their relationship, as they both struggle to make their dreams come true in the face of overwhelming rejection and the threat of selling out (embodied by an entertaining John Legend). The two must find a way to balance their professional dreams with the hope of a healthy relationship.

What’s brilliant about Chazelle’s work here is how far he’s willing to reach with his themes and genres. All at the same time the film is a Hollywood satire, romantic comedy, sobering look at love in the modern era, and realist manifesto. What makes it more interesting is the fact that he’s decided to put these harsh, realistic ideas in the world of a musical, a genre designed for the release of happy emotions. It’s a bold, weird choice, but one that works oh so well. You see, the literary theory behind why characters are supposed to sing in musicals is that their emotions (good, bad, or otherwise) have bubbled up so much they have no other option than to come out in song. If this theory is true, then it makes perfect sense that La La Land is a musical: these are emotional characters, balancing their optimism about life, love, and dreams with their frustrations about the world around them. These are characters who drive to the heart of our very human hopes and fears, and who are consistently paired with songs that perfectly match each of their feelings and emotions.

What’s also fascinating about this film is how perfect Chazelle got every single detail. Yes, his script and his direction are both very nearly flawless, but it doesn’t stop there. While Tom Cross’ editing isn’t quite as impressive as Whiplash (which I maintain is the greatest edited movie of all time), it’s still breathtaking, jumping from image to image, scene to scene, and yet still allowing each song and each moment a chance to breathe. At least something is breathing, though, because you won’t be once you see the colors that this cinematography, production, and costume design bring to you. Each image is a cornucopia of blues, reds, yellows and greens the likes of which you’ve never seen. From the gorgeous opening scene to a stunning image of four young women, each in a brightly colored dress, walking down the street to a sunset dance sequence to a closing dream sequence, each moment is like a painting, definitively closing the case on film vs. digital in a way that Tarantino, Scorsese, and Nolan have always hoped to and never succeeded. It’s the most beautiful work on a musical’s set since The Umbrellas of Cherbourg, and perhaps even The Red Shoes.

And then there’s the music. Ahh, the music. Justin Hurwitz, Benj Pasek and Justen Paul have crafted a completely original, wholly magical score of absolute winners that can work as radio hits, Broadway classics, and film staples. Two group numbers get the energy going high right from the start, with “Another Day of Sun” and “Someone in the Crowd.” Both numbers are great, but things really kick into gear when they begin writing solos and duets for our two leads. My personal favorite number is “A Lovely Night,” arguably the best Fred Astaire–Ginger Rogers tribute ever done. There’s also the campy but great piece written for Legend titled “Start a Fire,” which is a fantastic jazz-fusion piece and arguably the most listenable song. And let’s not forget the instrumentals-Hurwitz’s “Mia and Sebastian’s Theme” could be played a couple less times in the film, I’ll admit it. But that doesn’t stop it from being f*cking gorgeous each and every time. What I’m trying to say is a wholly original live action musical hasn’t been written or attempted on this scale since Fame (Moulin Rouge! didn’t have original songs), and it’s well worth the effort.

Of course, this film doesn’t work without the perfect pairing of actors, and that’s exactly what you get with Ryan Gosling and Emma Stone. Not only do the two have an electric chemistry, they also give two of their best performances of the year. Gosling’s Sebastian is a fiery, stubborn, temperamental artist, but he’s also one that Gosling fills with a witty, soulful, romantic streak. Even when Sebastian’s being a pretentious little douchebag, you have to love him, because Gosling imbues him with all of his charm and his poise, and adding little tics that make him the center of attention in each and every scene. Or should I say, make him try to take the center of attention in each and every scene. Because that honor belongs to Emma Stone, who has rightfully received the bulk of the critical praise. As well she should, and I will tell you why. It’s not because she gives a remarkable, heartfelt performance, although she does. It’s not because each and every frame makes you fall in love with this gorgeous, perky little wannabe actress, although you do. It’s not because this is the most definitive female performance in years, deserving to be mentioned in the same breath as Audrey Hepburn in Breakfast at Tiffany’s, Julie Christie in Doctor Zhivago, and Ingrid Bergman in Casablanca, although it is. It’s because of one sequence, near the end of the film: Audition (The Ones Who Dream). Stone performs this number live, staring straight into a camera in a black room. And I swear to God, it’s the most electrifying musical performance since Liza Minnelli belted “Cabaret” in 1972. Take Anne Hathaway’s buzzed about “I Dreamed a Dream” (which I loved), multiply it by a thousand, and you’re somewhere in the neighborhood for how great Stone’s performance on this song is. It’s a performance for the ages

This is all a long-winded way for me to say that Damien Chazelle has made a perfect film. I suppose I can sum up exactly how amazing this undertaking was with this fact: this is a film that ends in a dream ballet. I hate dream ballets. I love musicals, and yet loathe the idea of dream ballets. And this is still the greatest sequence of the entire year. I’m not kidding, it’s that great. I will tip my cap to anyone who can make me literally bawl at a dream ballet, and I can’t wait to see what Chazelle does next. Lord knows it’ll be nearly impossible to top this.