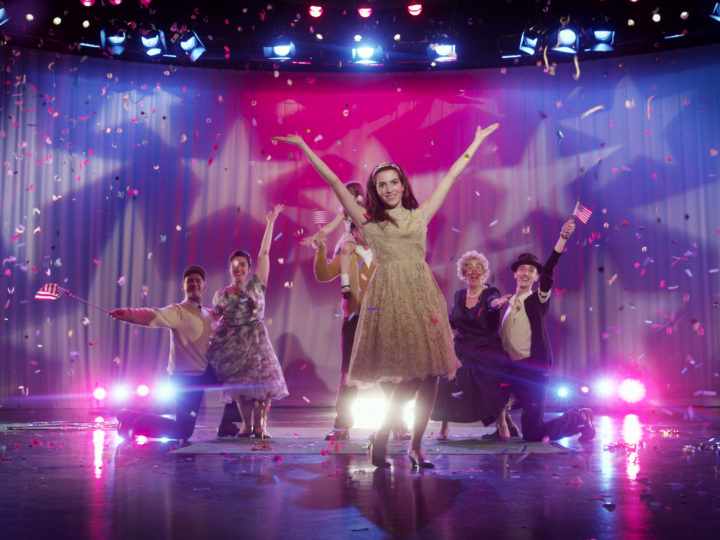 Before I begin this review, I need to address something about the film Liberty’s Secret. One of the strangest tropes in film and television is running into someone from high school unexpectedly. I’ve seen it hundreds of times, and thought to myself, “Come on, it can’t be that strange, can it?” So I ask you to imagine my surprise when I not only experienced this phenomenon in real life, but was confronted by the fact that the movie I was reviewing starred my high school’s theater star. Actually, starred isn’t strong enough-she’s the title character. It was a startling experience, I assure you. Now, I tell you all of this in the spirit of being unbiased. I don’t want the fact I used to know the lead actress to be seen as influencing this review one way or the other. It was simply a surprising coincidence, and one I did not expect to confront at any point in my career, let alone in the first few months. With that being said: Liberty’s Secret.

Liberty’s Secret is a musical political satire following the campaign of Kenny Weston (John Lepard) a moderate conservative running for President. Something of a more likable but less intelligent Ted Cruz, what he lacks in brains he makes up for in a killer campaign team. Realizing that they can’t win without inspiring the evangelicals, they realize he can avoid flip-flopping by hiring angel-voiced Liberty Smith (Jaclene Wilk), the stereotypically gorgeous and precocious preacher’s daughter, to become the spokesperson for the campaign. Realizing she lacks the proper training to pull off the media circuit, the Senator’s team instructs Nikki Levine (Cara AnnMarie) to teach her the ways of spin. However, sparks fly between the two, and soon their relationship threatens to bring down the Senator’s campaign.

I’ll start with the obvious: as the first film by writer/director/composer Andy Kirshner, a professor of Music and Art & Design at the University of Michigan, the film has some weaker moments. There’s some sloppy editing, dramatic moments are rushed, the small budget shines through time and time again, and there’s several moments of slo-mo that were either overlooked in the editing room or are meant to be a symbolic gesture that never comes together. However, for a first time director, there’s also a lot of promise. The emotional beats work, the musical numbers soar, and the actors have been well-instructed throughout. While the issues are impossible not to notice, they also can be overlooked if you are sucked into the story.

As for the acting, Wilk and AnnMarie are true standouts. Both seem incredibly natural on camera, both bring a sense of realism to their characters, and I’m incredibly elated to see two lesbian film characters who shy away from any stereotypical traits found in the genre. They’re just two girls who happen to be in love, and it’s refreshing that we finally see characters like that instead of the “butch” trope. Meanwhile, the film’s scene-stealer is far and away Lepard. While his first scene seems out of place in the sloppy opening, he soon grows into the role, getting the bulk of the comedic beats, all of which he nails perfectly. One of the best scenes in the film depicts debate prep, and Lepard delivers it so awkwardly it could have been straight from Veep. In smaller roles, a cameo performance by Malcolm Tulip allows for the best musical number in the film, which somehow makes the horrific notion of “conversion therapy” a hoot, and Alfrelynn J. Roberts brings the house down with the 11 o’clock number.

As mentioned before, it is the musical numbers where Kirshner shines. While I won’t claim every song is a hit, the cast sings the hell out of each and every one of them, and Kirshner manages to capture them with a verve that makes them soar. Such moments are the slow ballad “I Dare Not Speak Your Name,” the campaign song “The Good Old Days,” the aforementioned “Girls Like Boys,” and the 11 o’clock number “Your God.” In fact, the songs have enough strength, that I propose Kirshner try to adapt this into a stage musical. The songs play, there’s few changes needed, and budgetary concerns are less likely to be an issue on the stage, where more imagination is required. I would pay to see that stage show, with no changes to the cast required.

Story-wise, I liked the premise, and enjoyed how there were few (if any) characters painted in a bad light, no matter of their politics or religion. Everyone is likable in spite of their flaws, which is a good thing to have in a film. However, a couple of plot points could have needed some fleshing out. At one point, Liberty calls out Nikki on her “bigotry” towards religious people. This is actually an interesting and unique concept, and one that makes the film stand out amongst films covering similar themes. However, it comes so far out of left field, it just seems random, and then it is never mentioned again. Fleshing out scenes like this so that its more than a reason for the main couple to “break up” could really make the film run more smoothly.

Overall, you get your money’s worth with Liberty’s Secret. If you’re hoping for something of a grandiose caliber, then maybe this film isn’t for you. However, if you want something unique with a bunch of great songs, a fantastic cast that’s game for anything, and an uplifting moral for people of all politics, religions and backgrounds, then by all means, check it out. I certainly have no regrets about seeing it.

*Note: Liberty’s Secret will be released on Amazon and iTunes early November. You can preorder it here if you have any interest