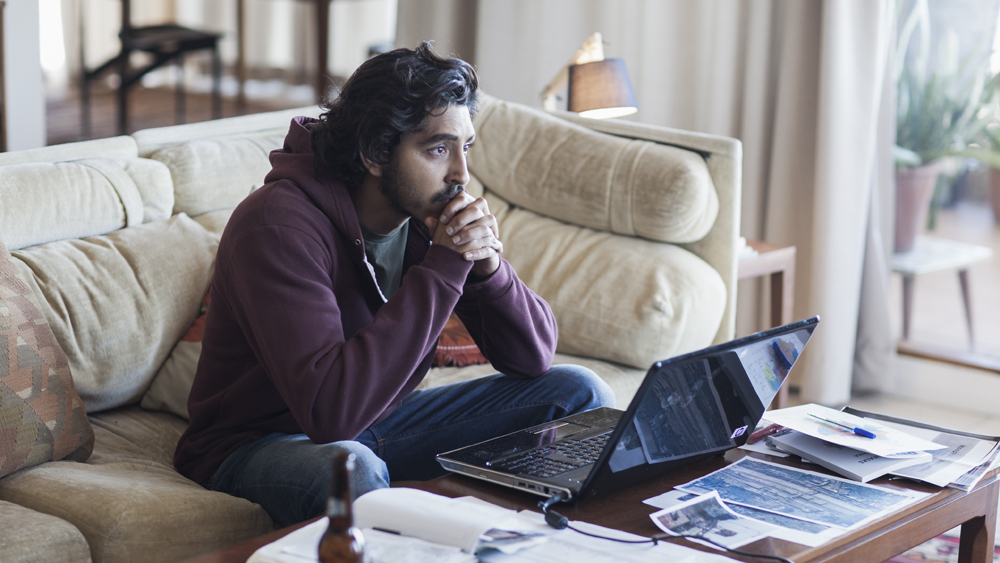 There is such a thing as “too good a story.” Sometimes there’s just so much information that’s so perfect for the screen, there’s no proper way to make the right movie about it. A famous example of this would be Unbroken, which featured a man who’d lived seven lifetimes before he was 40. Angelina Jolie tried her best to make the movie work, but it never fully came together. I bring this up because Lion veers dangerously close to being “too good a story,” forcing the cast to run the extra mile in order to make a mediocre script work. Luckily, thanks to their extraordinary talents, and first-time director Garth Davis’s clear vision behind the camera, the film manages to pace along with the occasional misstep before really coming home strong with the finale.

In 1986, at the age of five, Saroo Khan (Sunny Pawar) goes with his older brother to work picking items up at the train station. After falling asleep, he wanders onto a train and is taken 1600 kilometers away from his home. He wanders for a year, finding himself more and more lost, and running into shadier and shadier figures, before he finally wanders into an orphanage and is adopted by an Australian family, the Brierleys (Nicole Kidman and David Wenham). Twenty-five years later, Saroo is now a grown man (played by Dev Patel and sporting the greatest mane of hair I’ve ever seen), and things are going ok for him. His family life is getting by, he has a great girlfriend (Rooney Mara), and he’s studying hotel management. However, an encounter with the Indian culture on campus encourages him to try to find his family. A new Internet program called Google Earth is released, and it allows the user to see locations all over the world thanks to satellite imagery. Using his memories from childhood, the imagery of Google Earth, and good old-fashioned sleuthing, Saroo begins a quest to find his way back to his family.

Looking at this description, I’m sure you’re thinking to yourself, “Ok, that’s gotta be a powerful movie.” And that’s true, it does have a bit of everything-a heartwarming story, the chance for great performances, the ability to explore different cultures, etc. However, that’s only the surface level of the story. There’s a major wall that this story runs into when trying to make it into a movie: in essence, this is the story of a man who stares at a computer screen for a while. No matter the heartwarming conclusion or harrowing beginning, the bulk of this story lies on the actor playing Saroo’s ability to portray emotion while staring at a computer screen. That’s it. Nothing flashy, no true detective work, not even the “research” that made films like All the President’s Men and Spotligh interesting. Just a whole lotta Googling. No matter how you slice it, that’s not enough to make a great film. This is why Luke Davies has such a difficult job writing this film. He has to try to make this interesting, or to build up other conflicts in a dramatic way that doesn’t overshadow the main arc. And he does the best job he can-I will give him that. However, I just don’t think this is a job that anyone can make work.

You see, the film is left broken into two incomplete halves. The first is focused on Young Saroo, and follows his path getting lost more and more as he travels through India. This could be a fascinating segment-look at what Danny Boyle accomplished with Slumdog Millionaire! However, the problem is nothing about it feels like there are stakes involved, which isn’t good for a segment about a little boy getting lost. He just sort of stumbles from location to location, gets harassed by creepy pedophiles, and runs away further. Nothing really makes sense, and it feels kind of jumbled. Things get better when he becomes an adult trying to balance his life, but we don’t get to meet the actor playing adult Saroo for a full hour. This hurts our ability to connect to the actor, as we are too accustomed to the five-year old in the role. This leaves the second half fighting at a disadvantage, and when trying to leap the hurdles that are the plot, that disadvantage is damning.

Of course, the film is assisted by emotional beats. Watching the family drama unfurl helps to tug on the heartstrings the film wants to manipulate. And by pulling on these heartstrings just right, the film can manage to absolutely wreck you with the finale. Because no matter how much you love or hate the rest of this movie, the finale will move you. How can it now? Scroll back up to the top and read that description. It’s an emotional conclusion to an emotional story, executed well by Garth Davis’ careful eye. Davis knows how to film these scenes lovingly and smartly, so that even when Davies’ script isn’t up to snuff, there’s still a chance you’ll feel something. I didn’t, but I’m a cold, cold person, and the script distracted me too much. I won’t fault you if it manages to break through for you.

Davis is helped by a stellar cast who carry the film’s emotions well. Young Pawar is the most watchable part of the film’s first half, but it’s Patel who really gets to shine. Patel plays a man who’s gone through hell and found love on the other side well, and you really feel for him in his quest for closure. In many ways, it can feel like an extension of his character in Slumdog, but that character is so lovable you don’t blame him for that. The best performance in the film, however, is probably Kidman. The film really hits its groove when Kidman shows up, and she provides the role with a wit and emotion that carry the rest of the film. There’s a lot of stuff about her that doesn’t make sense, either because of editing or things left out of the script. She’s a character I want to know more about, both because of how great a character she is and how great a performance she gives. David Wenham wins the Tom McCamus Award, giving a performance that doesn’t seem that impressive since it works, but would be a nightmare if he weren’t so fantastic. And Rooney Mara creates the perfect girl-next-door type, giving Lucy a realistic heart inside a normally stereotypical role.

Lion is a flawed film, and is far from the high water mark for the genre. However, it is well acted, and undeniably powerful. Indeed, the only reason I ended up liking this film is because it nails the ending so perfectly. If you’re prone to crying easily, this is the film for you. If, like me, you’re a bit cynical and want a bit more bang for your buck, it’ll pass the time, but won’t floor you the way you hope. It’s a good film that isn’t quite as great as Brierley’s life story.