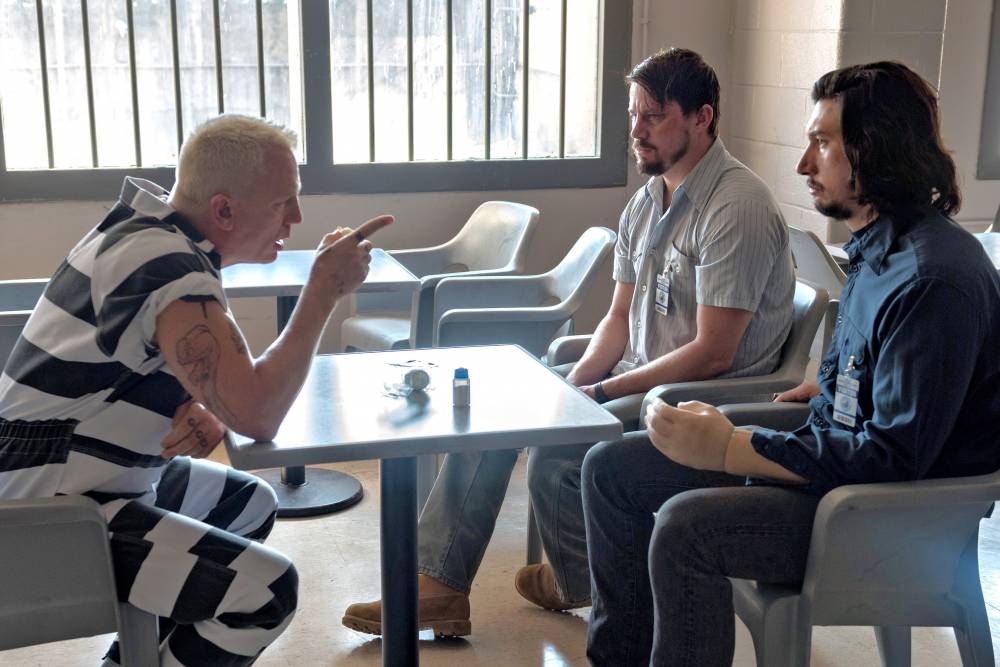 Man, what a breath of fresh air Logan Lucky is. While it feels, in several ways, like a cross between the 1970s redneck genre popularized by Burt Reynolds a la Smokey and the Bandit and the ultra-cool ultra-smart heist flick a la Ocean’s Eleven, it’s absolutely so much more than that. It’s a film that captures a time and a place with brains, heart, and humor, and essentially serves as the comedic younger brother to last year’s masterpiece Hell or High Water. Director Steven Soderbergh knows how to direct campy, fun films in an intelligent, cheeky way, and his newest is just the next addition in a long line of successes.

Jimmy Logan (Channing Tatum) is a West Virginian good ‘ole boy, a former college football star who’s leg injury prevented him from an NFL career. Divorced from his pageant queen wife (Katie Holmes), the only shining light in his life is his young daughter, Sadie (Farrah Mackenzie), and his younger brother Clyde (Adam Driver), who lost his arm in Iraq and has spent the past few years working as a bartender and lamenting their family’s string of bad luck. When Jimmy is let go from his job doing construction over the Charlotte Motor Speedway over his pre-existing condition, he devises a plan based on revenge, justice, and what his family is owed. Along with his brother, his sister Mellie (Riley Keough), and a trio of redneck brothers led by the incarcerated genius Joe Bang (“newcomer” Daniel Craig), they plan to rob the Speedway and make off with the money, Ocean’s Eleven-style.

Before I get down into the specifics of why I love this movie, let’s get something straight from the get-go: Steven Soderbergh knows how to direct a f*cking movie. This fact was apparent from the beginning with sex, lies, and videotape, but he has evolved and changed so many times as a director, it’s impossible to know what he’ll do next, and to what level of success. Arguably his most successful outing to date was Ocean’s Eleven, which has become the epitome of the cool, smart, twist genre flick where pretty people do awesome things for fun, and we root for them regardless of the morality of their act (besides, who really roots for a casino in movies, or in real life?). To this day, people still talk about the twisty, turning plot of that film, and how only a truly masterful director could have pulled it off. While Soderbergh never managed to duplicate the magic of that first film with the same actors again, he does manage to pull it off here, and even add something more to the material. For while this film has just as many twists as Ocean’s, is just as funny, and is just as hands-down entertaining, it also adds something extra to the material: a plot we can care about. Ocean’s was an experiment in throwing out the plot to see if we would care about characters just for being good characters. And yes, it worked, but tell me: why do I care about Danny or Rusty or Linus? What are their motivations, and hopes, and wants? These things aren’t necessarily vital for a movie (it gets by just fine on its own), but it’s nice having it there to flesh things out. And Soderbergh knows just how to incorporate his flair into the script by Rebecca Blunt, be she real or a fake name created by Soderbergh out of boredom. He makes every visual gag sing like it’s the first time we’ve ever seen it. He makes every detail of the setting work into the story, whether comically or dramatically, and even in terms of the laissez-faire approach he takes to the film itself. I mean, are we going to talk about the fact that biggest star in the film Daniel Craig is introduced as if it’s his first movie? These are all fun, random asides that don’t seem to add up to much in the grand scheme of things, but altogether, it makes for a rather touching, entertaining, special film that all audiences can enjoy.

However, what I think is best about this film is that it finds this wonderful balance in capturing a very specific group of people in a very specific setting without ever condescending them. These are people with real hopes, fears, senses of humor, and sets of morals. In a lot of ways, it’s reminiscent of the days of Smokey and the Bandit, where the lower classes band together as a community to stick it to the man taking advantage of them. And yet, these characters may be even more likable than those heroes of the 70s, for while they have all the humanization of the classics, they’ve done away with some of the flaws. While they may have the love-of-country and beer-swilling NASCAR fascination of their ancestors, gone are the days where we watch Confederate flag-bearing bumpkins we idolize just for not being from New York. These are good-hearted people who are underestimated in their inclusiveness (a major part of their plan depends on their friendship with the prison’s African-American community), their devotion (while they have no problem using it for laughs, the fact that Driver’s Clyde was willing to give his arm for his country is not to be taken lightly), and their intelligence (the fact the movie literally stops the action to have Joe Bang write out the scientific equations for his explosives is a hilariously uplifting scene compared to how Southern heroes are portrayed in the trucker films of old). Our heroes are real, likable people, ones that we can relate to, and still aspire to be. When they all come together to sing along to “Take Me Home, Country Roads,” it doesn’t feel like a crutch; it feels like a declarative statement of their belief system.

Of course, that’s a really boring way of describing how fun this movie is. While it’s decidedly more tongue-in-cheek than its predecessor in Ocean’s Eleven, it still has a moving wit that excites the audience. When the crew puts together their plan, it’s riveting filmmaking, as you never know what’s going to happen next, or what can go wrong, or who’s in on what. The jokes are incredibly solid, whether they be black humor involving Clyde’s replacement arm and the misfortunes that befall it, the traditional jokes surrounding Holmes’ husband’s cluelessness (poor David Denman has made a career out of being That Guy In The Way, from Roy to this) about cars, the visual gags like a sequence involving several fire trucks arriving late in the film (one whose meaning I won’t spoil here), and even moments of surrealist nonsense – one of my hardest laugh scenes in the film involve a character known as The Bear, which lasts for eight seconds, leads nowhere, and seems to have no purpose other than to just make people like me giddy. And sure, not everything in this plot works. Seth MacFarlane plays some sort of British douchebag who just seems unnecessary and could probably have been cut from the film completely and it would have made this an A+ movie (oh, and he isn’t funny in the movie either, and I don’t mind MacFarlane). And Hilary Swank shows up at the end in an entirely unnecessary epilogue, but it’s kind of worth it to watch whatever the hell she’s doing. She plays her role with some kind of deliberate acting choice, and I honestly can’t tell if it works or not. I’m leaning towards not, but I haven’t entirely made up my mind yet. I’ll keep you posted.

The performances across this film, outside of MacFarlane and, to a lesser degree, Swank, are all winners. This is the best Channing Tatum has been since Magic Mike (coincidentally, also directed by Soderbergh), portraying Jimmy as an open, complicated, likable guy, one whom we know from our own lives and would want to be friends with. There’s intelligence in those eyes, and pain in his heart, and yet we never look down on him or feel sorry for him. We just want him to catch a break and to win, so he can do what he loves with the people he loves, as scored by John Denver. Similarly, Adam Driver is solid as Clyde, and while he definitely doesn’t feel as naturally Southern as Tatum (who was born in Alabama), he does have the military credentials to carry himself as someone who stood up for his country and returned home to an uncaring community across the board. While it would be very easy to portray Clyde as a buffoon, or a Harpo Marx pratfall with his missing arm, he elevates the character with his acting choices, never making it feel exploitative or offensive, and giving the disabled a hero to look up to. I wasn’t in love with Brian Gleeson and Jack Quaid as the redneck Bang brothers, but there was a bit of charm to their well-meaning stupidity. I also found Dwight Yoakam and Sebastian Stan entertaining in smaller roles of merit. There are a trio of great female performances in this film, coming out of Holmes, Mackenzie, and especially Keough, who possesses spunk and nerve as the most intelligent and lucky Logan sibling. However, if there’s one person you’ll remember from this movie, it’s Daniel Craig. Craig commits to his role as hyper-intelligent redneck Joe Bang, portraying someone who refuses to let his lust for life be destroyed by either the prison system or the gaggle of idiots who surround him. All he wants it to use his brain to put some money in his pocket and a reminder of the joys of life, and he is so good in the role, it is impossible to imagine him as anything else – and this is a man who plays James Bond, for crying out loud.

When it comes down to it, I guess I just love Logan Lucky. It is the type of smart, funny film that we want out of Hollywood, and reminds us of why we like films of this kind. It gives us human protagonists who always feel on the side of right, no matter what shenanigans they get into. It features great, caring performances by a variety of actors, be they comedians, artists, or superstars. And it understands the type of top-down filmmaking that makes for classics, flowing smoothly from scene to scene and joke to joke with a directorial passion and energy. This is a film that’s going to be one of those films shown forever on TNT, the ones you can’t turn off when you pass it by. I really enjoyed this film; it’s a reminder of the level of intelligence that goes into “mindless” entertainment, and why we love these kinds of films in the first place.