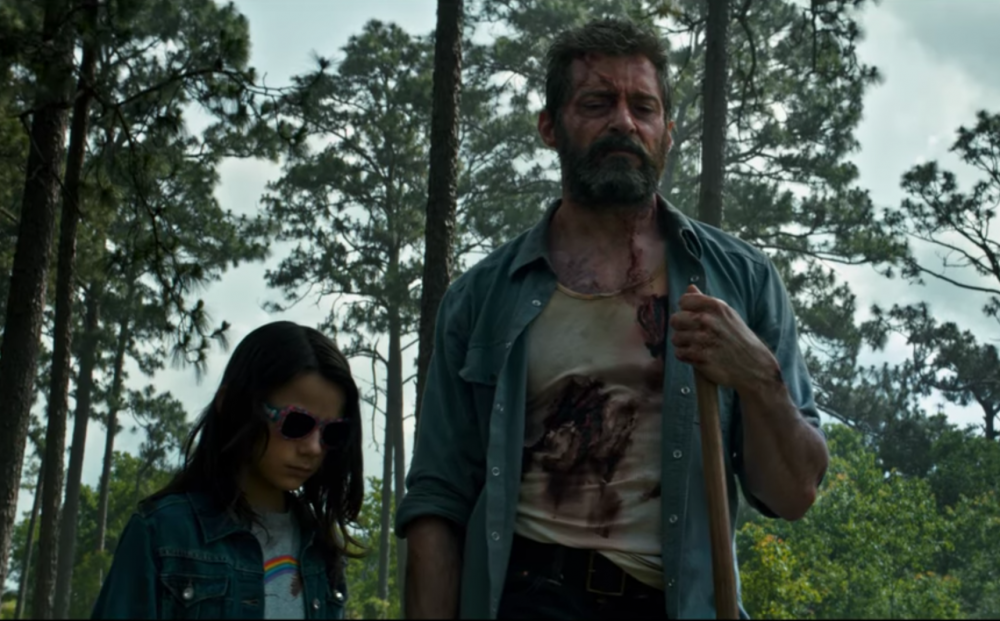 One of my favorite subgenres of film is the embittered antihero who must embark on a road trip with a young child for the fate of the something-or-other. It’s the type of story that is most often found in the Western or sci-fi genre, and are often great showcases for action setpieces and character building. This is exactly what director James Mangold and star Hugh Jackman give audiences in Logan, the final outing of Jackman as Wolverine. And needless to say, thanks to an accurate portrayal of the character, in all his gritty glory, he goes out with a bloody, somber bang.

It is 2029, and the mutant race is all but extinct. Logan, the alter ego of Wolverine (Jackman), has given up on life. Everyone he’s ever cared about is dead or dying, he’s never been able to prove himself a good man, and his healing factor is starting to give out, leaving him in chronic pain, covered in scars, and with the sobering knowledge that he most likely won’t live long. He spends his days driving a limo in El Paso and remaining in a perpetual state of drunkenness, in the hopes of raising enough money to escape in a boat with his former mentor Charles Xavier (Patrick Stewart), who has grown senile as he reaches 90 and has psychic outbursts with his Alzheimer’s-induced seizures. Things for our beloved X-Men are at an all-time low. However, one day Logan is hired by a young Mexican nurse to transport a young girl from Mexico to North Dakota, a little girl with extraordinarily similar powers, and he is soon forced into a series of events that will alter the course of Logan’s life.

I’ve had a long and troubled history with the X-Men film series. Having watched the 90s television show and read the occasional comic or two, I had a basic understanding of the source material going in. I enjoyed X-Men, and I absolutely loved X2. However, X-Men: The Last Stand was so bad, I almost never went back. I luckily never sat through X-Men Origins: Wolverine, and I opted out of X-Men: First Class and The Wolverine, despite more pleasant reviews. I did check out Days of Future Past on a whim when it came out in 2014, and I had a pretty good time with it, but it wasn’t enough to win me back for Apocalypse. I’m telling this parable for two reasons: the first is so you understand where I’m coming from as a Wolverine fan, and the second is to point out that, despite the same characters and storylines, this really isn’t an X-Men film at all. Sure, there are mutants, and knowledge of the lore is helpful, but this film is too different from the others to even qualify. This is, wholeheartedly, a Western. The parallels can be found all the way through it-from the steely “gunslinger” on his way out to the brawls with outlaws along the trail to the random families of ranchers that the hero must assist, all while he drinks heavily, these are the tropes and traits of the Revisionist Western (a Revisionist Western being a subgenre dedicated to erasing the glorification of the murder as seen in the John Wayne classics). This Logan isn’t the stereotypical Wolverine of the former films, he’s Clint Eastwood as The Man With No Name, or especially Unforgiven. And it’s no secret the film draws from Shane, considering they literally watch it on TV during the movie, and the ending is a blatant take on that film. However, these all tie into the reasons that Logan is not your typical superhero movie, but something more special.

Speaking of endings, kudos to Jackman and company for opting to end this film the way I’ve always said superhero films need to end. It gives the film a sense of weight and accomplishment that sets it apart from several other projects of its time, including the Nolan Batman movies and literally anything that Marvel has been doing lately. This is a film that has weight and consequence in each decision, and that firmly rests with the choice to make this film as realistically as possible. One of the major criticisms with individual Wolverine movies is that this is an inherently violent character. He has lived off the land for several years, as well as through through several wars; he has been “killed” in more ways than you can possibly imagine; and most importantly, his main power is that he has six unbreakable knives that he uses to stab people. To make a movie about this type of person, you cannot settle for a simple “PG-13.” Not only would that be dishonest by toning down on the language this individual would use, or the way this individual would live, but it becomes irresponsible. Making movies about violent killers, even if they’re heroes, is one thing, but to sell it to kids by removing all traces of blood, i.e. consequence, from these actions tells these kids that slashing and killing is a harmless act. As gruesome and sickening as it is, it is both accurate and more responsible to make audiences understand what life is like for Logan, knowing that he is solely responsible for ending these people’s lives, and with absolutely horrible methods. It really does speak to the character, and help us understand why Logan is so pain-ridden. Plus, it allows for some really stellar filmmaking. There are three very good fight sequences, all of which build to two game-changers, one set in a hotel and the other a one-take sequence of Wolverine being Wolverine. By releasing the film of the shackles of a PG-13, Mangold has allowed Logan the freedom to truly explore what it means to be Wolverine, for better or worse.

As a general statement, this film really does belong to Jackman. Not only was it his brainchild, and his passion project, but he really does prove to us why he is the quintessential superhero as this character. At this point, Jackman is as entwined with Wolverine as any actor has ever been with a character, to the point where it is a near impossibility to determine what is acting on Jackman’s part and what is true emotion on Logan’s. The pain and weariness in his eyes is not unlike Clint Eastwood’s in Unforgiven, and he perfectly portrays a man who has lived 150 years, seen things he wishes he hadn’t, and is truly terrified to know the answer to if he’s a good man or not. He’s quiet, funny, sarcastic, and, when needed, truly terrifying, and it all comes from the natural charisma that is Hugh Jackman. Meanwhile, Stewart goes out strong, portraying our favorite kindly mentor as a decrepit old man well on his way out. It’s tragic to see, but Stewart plays it so well that it too seems like the realistic path of this character. And it’s worth noting that a mid-film monologue Stewart delivers is not only great by superhero standards, it would be great by any standards. As unlikely as it is in this case, this is the type of monologue and performance you constantly see in Oscar clip reels. Boyd Holbrook plays the “villain” of the piece the way any villain in a James Mangold film plays it-by chewing every piece of scenery in sight. There are very few differences between what Holbrook is doing here and what Ben Foster perfected in 3:10 to Yuma. It’s a love it or hate it performance, but I personally enjoyed what I saw. However, perhaps the best performance comes from 12-year old Dafne Keen, who portrays young Laura with a fiery passion and animalistic fury that makes her a wonder to watch. She has a real presence and killer timing, and she really does possess the animalistic naturalism that made Jackman such a joy in the first film. The rest of the cast is sort of forgettable or extraneous, but those four leads are charismatic to carry on without them.

Unfortunately, the film does suffer some serious setbacks. I mentioned above that many of the characters end up forgettable, but the issues don’t stop there. Due to the major “cribbing” nature of the storyline (again, this is essentially an homage to many better Westerns), much of the story feels extraneous, unnecessarily dragged out, or clunky. The script takes great pleasure in being more “adult” and allowing Wolverine the opportunity to say the words he’s always wanted to say in full force, but other than a few great lines, it doesn’t really craft anything memorable out of it. It seems that so much attention was put into creating gorgeous fight sequences (and some of them are indeed visually stunning), that they forgot to provide a stronger story and great dialogue to back it up. It would be helpful to remind them that while they may still be a cut above the rest of the superhero movies out there, they still can’t be considered in the same league as the Westerns they idolized; Unforgiven, Shane, A Fistful of Dollars, and the rest all built their action setpieces around great stories and screenplays, allowing the dialogue to fire when the bullets aren’t. The script unfortunately hinders what is an otherwise strong film.

However, despite my trepidations in the writing and the story, I’m still feeling high on this film. What a way to retire one of the most memorable characters in film history. Hugh Jackman and co. took a risk turning out an R-rated, adult superhero movie, and I do believe that it worked out in many ways. We are watching an actor say goodbye to an old friend, and he is allowing us the opportunity to attend the party. And thanks to strong action, strong acting, and strong direction, it really is one f*cking fun celebration.