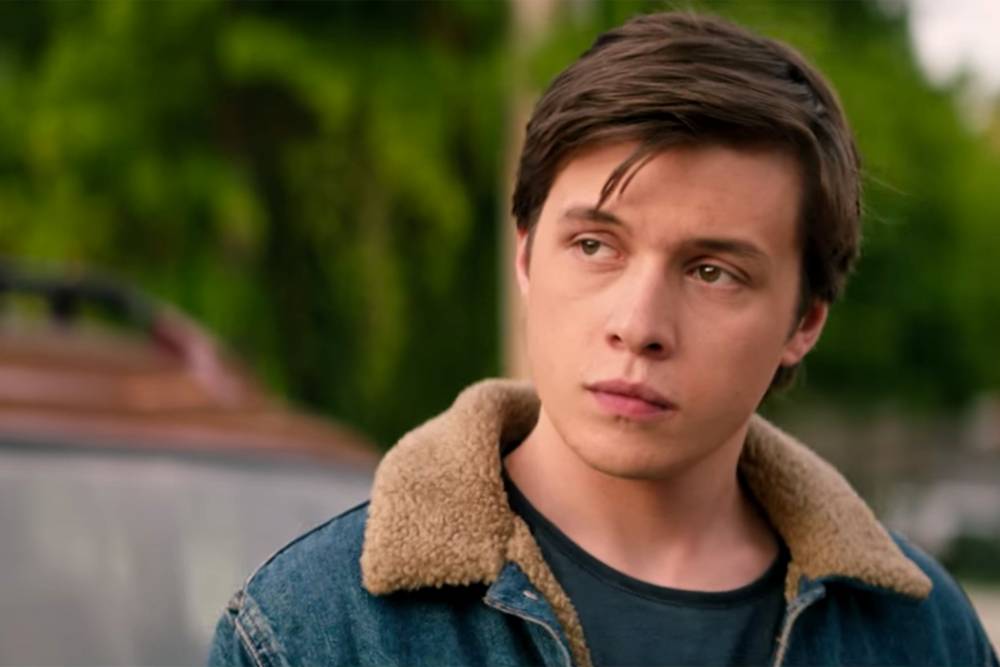 In almost all respects, Love, Simon feels about fifteen years too late. It’s version of a high school film feels very early aughts, its handling of gay romance and everything that goes with it feels early aughts, and the cheesiness feels early aughts. The fact the book it is based on came out in 2015 truly baffles me. Now, I don’t want to condemn the film too harshly – its heart is truly in the right place, and it never (intentionally) offends. However, it feels like such a delayed, half-assed, insincere gesture, and it ends up leaving you confused more than joyful.

Simon Spier (Nick Robinson) is your average high school kid. He comes from a happy family, including mom Emily (Jennifer Garner), dad Jack (Josh Duhamel), and sister Nora (Talitha Bateman). He has a strong group of friends, including Leah (Katherine Langford), Nick (Jorge Lendeborg Jr.), and Abby (Alexandra Shipp). And he seems to have things together at school, having a role in the chorus for the school play and being on decent terms with the school’s teachers. However, he does harbor a huge secret: he’s gay. He strikes up a conversation with a kid from his school anonymously commenting on the school’s Tumblr page, and they begin to fall in love over email. Simon must find out who his mysterious man is, and if they can make it work – and fast, for there are efforts of blackmail afoot.

Everything about Love, Simon just feels very…confusing. Now, don’t get me wrong, the film isn’t offensive, or misguided by any means (other than a character referred to as gay who is very clearly trans). It’s just that the film feels…too late. The entire way they present Simon’s struggle to come out in what seems to be a fairly progressive California high school seems like a plot from a 2000 teen comedy, or even Glee. What makes it even more challenging is the corny center of the entire production, which forces you to realize that shows like Glee and Degrassi had more nuance than this film released in 2018. Every aspect of the film plays like this, like a sexuality-flipped version of She’s All That. The opening monologue – which they repeat verbatim a few times throughout the film – is pretty terribly written, and there is one character, Martin, who is an absolutely terrible human being that the film keeps trying to transform into Seth Green in Can’t Hardly Wait. It’s so strange, because you’re supposed to empathize with him, and some scenes imply you’re supposed to applaud for him, but no matter what happens, he always feels like a “woke” MRA member douchebag. Decisions like these are incredibly frustrating, especially because every once in a while the film will feature a genuinely sweet or genuinely smart sequence that shows what could have been. There is a genuinely good mystery at the heart of the film, and watching Simon try to figure out who Blue, his mysterious pen pal, really is actually has some merit as a plot. And there are a few incredibly potent coming-out scenes that actually have the emotional weight to back them up. Meanwhile, there is one sequence that possesses the snark and intelligence I thought this film would possess, including a “straight coming out” and an “out” Simon dancing through a college dorm to “I Wanna Dance With Somebody.” This was the type of film I was expecting, and it is the type of movie I so wanted this to be. Unfortunately, any time the mystery is getting good, or the story gets emotional, or the ideas become self-aware, the film decides to overly-complicate itself. It throws in five or six unnecessary twists before the halfway mark, and by the time it finally tries to wrap everything up, you already find yourself pissed off that the thing is still going. Oh, and while I understand the importance of a romantic conclusion to this type of film for the LGBT community, I personally think the film would have been better if they hadn’t shown who Blue really is.

However, what mostly baffles me about this film is how wrong it gets high school. Everything about it screams pre-Glee, from the bullies (there are exactly two who make really bad jokes about gay people and make these jokes while standing on tables) to the portrayal of the Principal Who Wants To Be A Student (more on him in a minute). The teenagers do not seem natural, almost like they were written by a fifty-year-old straight white man (two-thirds of which are correct). Instead of swearing like normal teens, they use swear words’ initials – F this, HJ that, and so on. They make Cosby jokes, which feel weird and out of place. And they are obsessed with a “blog” about their high school which is later revealed to be a glorified Tumblr page (as if Tumblr was popular with anyone other than the emos). The high school (again: a high school) performs Cabaret as their spring musical, which is such an odd choice, and so badly performed (possibly not on purpose) that it kind of made me hate Cabaret. And yet, like the film’s narrative, there are a few moments that show us what could have been. Like all great high school films, a funny teacher can go a long way – the drama teacher here hates life so much, it helps the audience make it through the drama club scenes. And there are two scenes involving an ex-girlfriend of Simon’s that are actually laugh-out-loud funny. There was potential here to make a good high school romantic comedy. Unfortunately, too many stale jokes and portrayals drag it down.

Now, if this film does have a major redeeming factor, it’s that the cast is all incredibly adept. Nick Robinson keeps this thing afloat at almost every single turn, handling the portrayal of a gay teen struggling to come out with a relative flair. He’s charming, funny, and awkward, and oftentimes he’s the only one saving this thing. Amongst his friend group, Katherine Langford holds up well enough to prove that 13 Reasons Why was no fluke, although the real stand out is Alexandra Shipp as Abby, who is consistently great and feels like a natural teenager. Jorge Lendeborg, Jr. rounds out the group as Nick, and he may currently be the greatest “high school” actor around, after his great performances here and in Brigsby Bear. As for the parents, both Jennifer Garner and Josh Duhamel have this weird tendency in the film: when they are interacting with Simon one-on-one, they are emotional, funny, and real. However, whenever they are in a scene together, whether they interact or not, they lose all of that momentum, telling stale jokes and providing wooden acting. I’m not sure if they just hate each other in real life or what, but considering I had no idea that Duhamel could act before one of his scenes near the end, I wish they’d fixed that problem earlier in the production. Logan Miller plays the aforementioned Martin, and while I was kind of entertained earlier on in the film, he slowly grows so annoying and grating, I began to hate his face. And then there’s Tony Hale. My God, there’s Tony Hale. Tony Hale plays the vice principal of Simon’s school. Every decision Hale makes here is the wrong one, coming off so gratingly annoying and unfunny you begin to wonder if it’s an intentional choice. And then he’d disappear for a while, only to randomly show up to offer some commentary. I will admit I did laugh once at a joke involving Hale and a rainbow pin, but otherwise…yikes.

Look, all in all, Love, Simon is a harmless film. It’s a dumb high school comedy that feels more dated to 2002 than Lady Bird did, and that film took place in 2002. It’s a massive example of too little, too late, feeling like an empty gesture to an underrepresented group. I wouldn’t say the film is exactly worth your time, but I will offer up that it won’t offend anyone’s sensibilities, and there is a little (and I stress the “little”) joy to be found inside its 110-minute running time. However, be aware that what you’re watching is a sappy, vague gesture that doesn’t stand out as a good rom-com, a good high school film, or a good LGBT film.