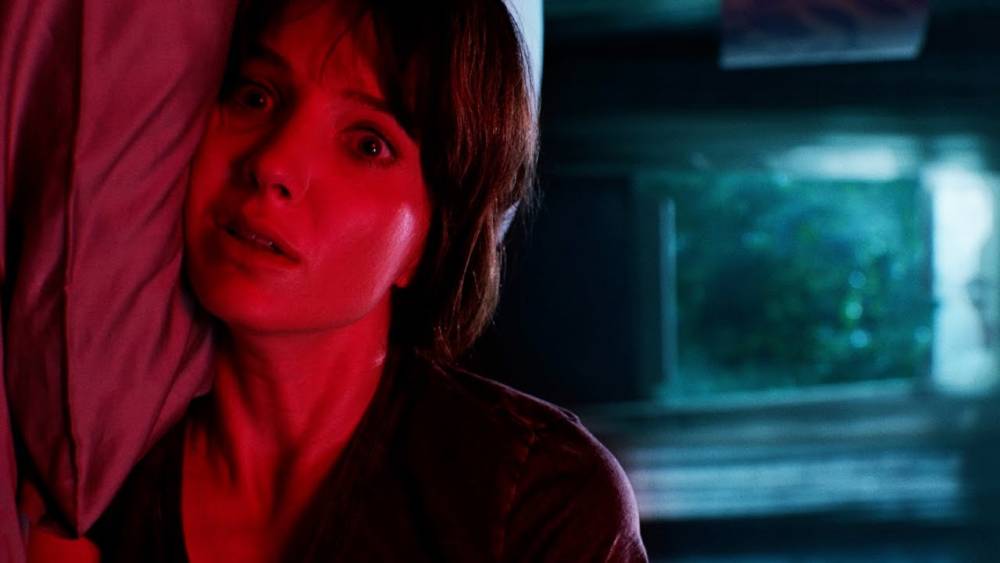 Outside of Jordan Peele and Adam Wingard, James Wan seems to be the only director in Hollywood interested in making fun horror throwbacks that allow audiences to just sit back and have a ball. Ever since changing the game with 2003’s Saw, Wan has given us Insidious, The Conjuring, and Aquaman (not scary, but certainly creative). With his newest film, Malignant, Wan has made what can only be referred to as the most unoriginally original film I’ve seen in recent memory. And while that sounds condescending, I assure you it isn’t. Wan has taken almost every horror subgenre and director you can imagine – Gothic, giallo, exploitation, body horror, Tobe Hooper, Sam Raimi, Mario Bava, David Cronenberg, and so on – and thrown them into a blender, creating a concoction so strange and so unique, it must be seen to be believed.

After a break-in leaves abusive husband Derek (Jake Abel) dead and his wife Maddie Lake-Mitchell (Annabelle Wallis) in the hospital suffering a miscarriage, things take a dark turn for the young widow. Upon arriving home, she starts to see visions of the murderer, a creepy-looking man named Gabriel, as he breaks into a series of houses and brutally murders the owners. As it turns out, these visions are, indeed, happening in real life. And so it’s up to Maddie, her sister Sydney (Maddie Hasson), and Detectives Kekoa Shaw (George Young) and Regina Moss (Michole Briana White) to find Gabriel before it’s too late – a journey that will unlock dark secrets from Maddie’s past.

It takes some time to settle into what Wan is doing here. The prologue, with its stilted dialogue and over-the-top performances from psychiatrists working on a supernatural patient, is fairly off-putting, and begging the question, “Oh God, this is going to suck, isn’t it?” It’s not until there’s a dramatic closeup with scary music as a character declares, “Time to cut out the cancer!” that you realize the level of schlockiness that Wan is playing with. Yes, this is a dumb horror film where the bad characters are over-the-top bad, others are archetypally silly, and everyone speaks in bad cliches. But that is only because Wan is paying homage to the dumb horror film with bad characters and cliches. Every terrifying twist and turn is undercut with a knowing wink to the camera, addressing the silliness of the ordeal. When characters reveal major, but benign (not to mention predictable) secrets, there’s a dramatic close-up accompanied with industry remixes of “Where Is My Mind.”

In fact, dramatic close-ups are utilized every time Gabriel’s name is said aloud. Whenever there’s violence, it is portrayed with a flair for the Grand Guignol, not unlike an 80s film where the silliness shields the audience from the horror of the mutilations. Characters leap from fire escapes, fall five stories, hit a closed dumpster, and walk away completely unscathed. The villain, who may or may not be a ghost, is often shown in a warehouse crafting an over-the-top weapon with which to murder people. And it all climaxes in one of the most fun twists in recent memory; a twist that is so obvious you’ll call it within 20 minutes, and yet knowing what’s coming will never prepare you for what’s coming. Wan accomplishes the challenging task of crafting an intentionally schlocky horror film, and by juxtaposing the intelligent and the stupid, the resulting product is nothing short of bloody brilliance.

However, what’s most impressive about Malignant is the way that Wan pays tribute to everything horror – the titans, the subgenres, everything – by blending it all into one batsh*t crazy experience. Obviously there’s a great deal of Raimi influence here, from the quick camera movements to the low-budget atmosphere to the hilarious excessiveness of the horror and violence. There’s one shot where the camera glides through a peephole out into a dark and ominous street that seems straight out of The Evil Dead. But the influences on display are far deeper and far-reaching than that. There’ a good deal of Hooper too, particularly in the sense of silly glee present in Poltergeist and Salem’s Lot.

There are POV shots and kills that owe a great deal to Dario Argento, and graphic murders performed by shadowy figures with signature weapons – all giallo-inspired in execution, even if the film as a whole is not. The references and allusions are frequent and well-executed, including atmospheric shots of fog-framed houses and the score by Joseph Bishara blends together Bernard Hermann, Joseph Loduca, John Carpenter, and Goblin into a trippy, surreal experience. And just when you think they’ve covered every genre under the sun, and there’s nothing else to throw into the horror blender – boom! Body horror. When you combine all of this together under Wan’s careful eye and ability to craft a horror scene, it creates a fascinating, funny, and fresh final result.

Speaking of Wan’s direction, I really do want to focus on his unparalleled knack for tension. Wan and his fellow screenwriters – Ingrid Bisu and Aleka Cooper – treat the story like it’s a magic trick. They tease you at the outset with a twist so obvious, you overlook the more terrifying results to come. It’s a sleight of hand; a series of mildly scary results designed to give way to something more inherently sinister. It helps that it all stems from sleep paralysis and nightmares – there’s nothing like finding terror in something we’re already terrified of. But it’s more than that. Wan has always been a master of tension, and that hasn’t changed here.

Wan has this dynamic ability to build this looming sense of dread. Fluttering curtains reveal hidden murderers, as do TV-illuminated living rooms. The cinematography is forged in flashes of reds and blues, all swirled together with artificial fog. By the time the scene reaches its climax, you’re begging for the scare, just to feel a release. And when coupled with a newfound sense of gore, it comes together as a well-rounded horror effort in every regard. My only disappointment is the reliance on CGI blood – while it looks cool to see the splatter “land” on the camera, how much cooler would it have looked if the effects were practical? But I digress.

I wouldn’t call any of the acting in the film “good,” but everyone at least knows what they’re here for. Annabelle Wallis is an interesting actress, and she gives an interesting performance. It’s hard to say what specifically is so good about her work without giving too much away, but I can she walks a thin line very well, and rolls with the punches of each scene. My only regret with her performance is that she pulls away focus from her younger version, played by McKenna Grace. Grace is a phenomenal rising star, and relegating her to a handful of scared flashbacks is just disappointing.

I would not call Maddie Hasson as sister Sydney a great actress, but she gives us the type of performance we expect in a horror movie. And what’s more, she earnestly commits to a hilarious bit where she’s obsessed with psychics. George Young and Michole Briana White are pretty entertaining in their delivery of the schlockiest detective lines this side of Law and Order. Marina Mazepa and Ray Chase work together to create a worthy horror villain in Gabriel – certainly more terrifying than Jake Abel’s abusive husband. At least his tenure in the film is graciously short. Oh, and as a mysterious woman with all the answers, I’m happy to report that I’m always delighted when Jean Louisa Kelly shows up. Look, this is a fine cast, but let’s not kid ourselves – that’s not what we’re here for.

Malignant is a silly, stupid, stunning, scary fun time at the movies. It’s just self-aware enough to escape the stupidity, but just stupid enough to be fun. It’s a cosmic gumbo, if you will. I wouldn’t call it perfect, and you definitely need to be on the same wavelength as Wan for it to work. But if you’re looking for a good, fun time, that’s smart when it needs to be but knows how to shut its brain off and show us the blood, then Malignant is the film for you.