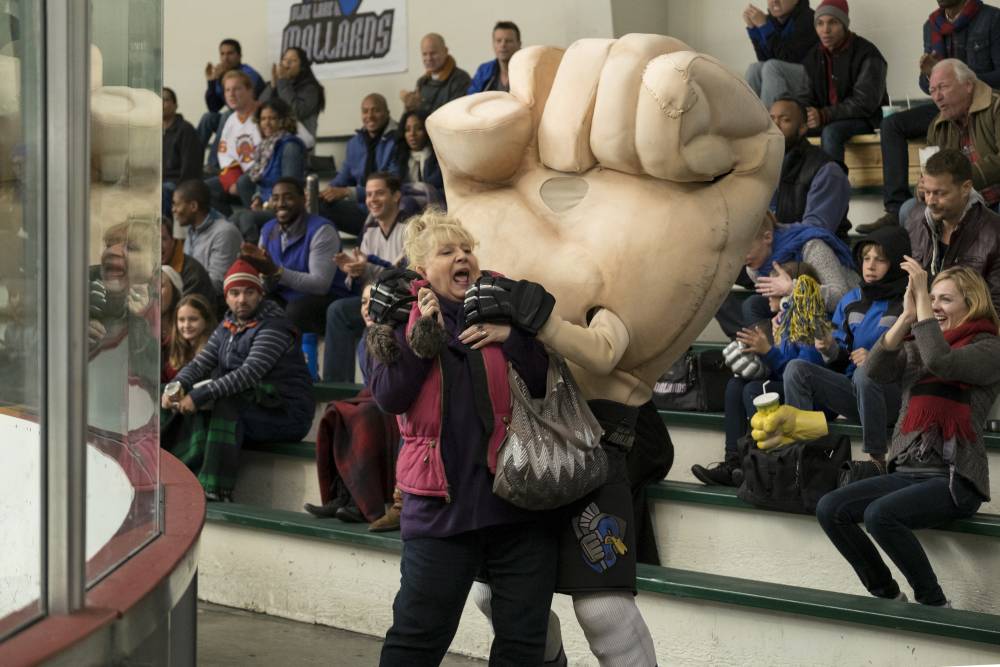 About a month ago, I wrote in a review of some forgettable little film (I don’t even remember what it was, if I’m being honest) that it was “the diet version of a film.” I realize now that this was an inaccurate statement. It’s more accurate to have referred to it as the “Coke Zero” of films. I am pointing this out because I have now seen the “Diet Version” and realized that it is not entirely a bad thing. You see, Mascots, the newest film by Christopher Guest and his motley crew, is essentially just Diet Best in Show (with a little bit of Waiting for Guffman thrown in for good measure). And that is perfectly fine with me. Sure, I would have liked to see something a little more original and a little more side-splitting, but hey, it still tastes the same, and the comedy is still of the highest order. So while it isn’t the game changer the original trilogy happened to be, it still features enough skill and charm to make it a must-see for fans of the mockumentary style.

Focused on about seven individuals or groups, the “documentary” follows the top Mascots in the country as they prepare to compete for the Golden Fluffy Award, a prestigious trophy presented to the most talented Mascot in the country. As they prepare for their final routines, they train with coaches, fight with their father, watch their marriages fall apart, and perfect their routines as they try to hold it together into the ceremony.

The first thing you’ll notice watching Mascots is that the humor is a lot more on-the-nose than it’s been in the past. Most Guest films and jokes are built around absurdist scenarios played incredibly straight, like the famous “Bonnie” monologue from Guffman, or the two left feet joke from Best in Show. However, in this, there’s more of an attempt to make humor that even the common man would get-things like the “Gluten-Free Network,” or a man dressed as a fist flipping off the judges. And sure, some of these are funny, but it just doesn’t seem natural for Guest-the style is so specific, and so cerebral, that it allows you to return to the well multiple times, each time allowing you to bask in the glory of their improvisational prowess in a new way. Here, while the jokes are funny, there’s really only a need to watch it once. There’s nothing new you’ll get on second viewings. Furthermore, the formula is eerily similar to Best in Show, the Empire of the Mockumentary trilogy. A group of kooky competitors travel into town for a competition. It’s hosted by an anxious young up-and-comer. One team is a couple trying their hardest not to completely fall apart under the pressure. Someone gets sick or injured, forcing a relative to step in. And the most mild-mannered character wins. All while Fred Willard acts like a dick. They’ve done all of this before.

That doesn’t, however, mean it isn’t worth the watch. The jokes are still really funny. An opening sequence featuring a married couple getting test results back slowly devolving into passive aggressive “compliments” ends with the husband, as a complete throwaway, asking about antidepressants. A casual line about “Rhea Perlman Middle School” is the film’s first belly laugh. A photograph of an “Anatomically Correct Donkey” with a giant black censor bar is jaw dropping. And there’s a running joke about Furries invading the ceremony that is grating when first done, but somehow gets funnier each time, until it becomes the best joke of the movie. And of course, the final 40 minutes is dedicated to the actual competition, with each routine being funnier than the last. I don’t want to give any away, but have a tissue box ready-you will laugh until you cry.

As for the cast, it’s really just a good excuse to get the band back together, like when the Eagles reunited. Former troupe members file back into place with few, if any missteps, ranging from Jane Lynch and Ed Begley, Jr. to Jennifer Coolidge and John Michael Higgins. Of the newest members of the group, I would say the four standouts are Zach Woods and Sarah Baker as a pair of married mascots whose marriage is slowly eroding due to her aggressive, abusive nature and his frequent philandering, Chris O’Dowd as the “bad boy” of the Mascot scene, a fist who spends his time groping the ladies and assaulting the hockey bros, and Susan Yeagley as the sister and support system of one of the most renowned mascots in the league. That mascot is played by Parker Posey, who is incredible as Cindi Babineaux, and proves that not only was she the most underrated member of Guest’s group, but the most underrated actress of her entire generation. Guest himself makes an appearance, reprising his role of Corky St. Clair from Waiting for Guffman. And his performance is too short. St. Clair is my all-time favorite character from any of the films, and Guest steps right back into him without missing a beat, like he’s been playing the role the past twenty years. God bless you, Corky. And Fred Willard is also in the cast. It’s not his best outing in the series, but you know what? We’ve reached the point where we need to put Willard’s idiot jackass in the same category as Buster Keaton, Charlie Chaplin and Jerry Lewis: it’s a specific type of character that can only be played by him. It’s an art form, and he’s earned his place amongst the legends.

If I had one more nitpick about the film, it’s that they didn’t do enough with the style. When This Is Spinal Tap came out, it was at a time when rock concerts were a popular form (it came out the same year as Stop Making Sense). When Guffman and Best in Show came out, there were thousands of documentaries about small town life coming out every year. And A Mighty Wind came at a time when the great bands were retiring and putting on One Last Show. So, with the announcement that Mascots was going to be released by Netflix, the home of the modern documentary, spending the past five years trying to completely change the documentary game (Making a Murderer and 13th spring to mind), it seemed like the perfect opportunity to update the style and modernize the genre that Guest himself created. Instead, he settled for more of the same. And again, more of the same is still better than most of the drek we get. But with shows like Documentary Now! revolutionizing the game, it just makes the whole thing seem generic and basic. It’s a missed opportunity.

So that’s Mascots. It isn’t the best Christopher Guest movie. It isn’t the best comedy of the year (ironically, that’s Popstar, Andy Samberg’s homage to Guest). But it is still a fun, laugh-out-loud comedy. And even if you won’t feel the need to return to this one the way you do for the other three, it’s still good enough that the series remains the greatest set of six films not named Star Wars. At least none of these have Jar Jar Binks.