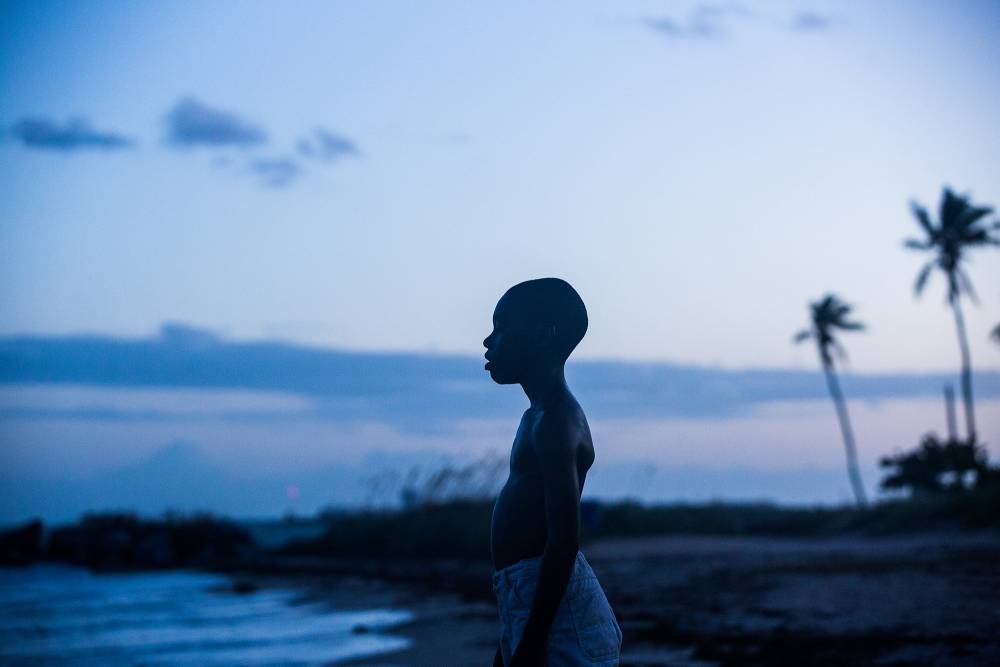 Some films just explode into existence-they fill each frame with beauty and soul and verve until it can no longer be contained on the screen and transcends into being. Moonlight is such a film. Actually, film is the wrong word for it. It is an experience-the way the themes and the ideas permeate every second of the film, it feels like a really great book. Yet a book wouldn’t do this justice-you don’t get these colors, these emotions, these looks on the page. You need celluloid. And what Barry Jenkins has accomplished in doing so is nothing short of remarkable.

The film follows the life of Chiron (pronounced like Tyrone, but with a “Ch” in front of it, and played by Alex Hibbert, Ashton Sanders and Trevante Rhodes) in three parts, every eight years, from age eight to twenty four. As a child, he is shy and withdrawn, picked on for his diminutive size-he’s called “Little” by the other kids-and ignored by his drug-addled mother (Naomie Harris). His only friends are drug dealer Juan(Mahershala Ali), Juan’s girlfriend Teresa (Janelle Monáe), and a young boy his own age, Kevin (Jaden Piner, Jharrel Jerome, and André Holland), who teaches him how to fight and is always nice to him. Juan becomes like a surrogate father to young Chiron, teaching him to swim and explaining to him what it means when the other kids (and his mother) call him a “f*ggot.” Fast forward eight years, and Chiron is still bullied, and still spends his nights with Teresa, but his friendship with Kevin has increased, until an act of passion and an act of fear change everything forever. Fast forward another eight years, and Chiron has grown up into a strong, tough young man, calling himself Black and living in Atlanta. However, two phone calls-one from his mother and one from Kevin-bring him back home to Miami, where he confronts his past and his future.

What’s truly amazing about Moonlight is the way Jenkins explores everything without ever actually being about any of these things. Themes and issues raised in the film, off the top of my head, are drug abuse, African American life, race, sexuality, love, the cyclical nature of life, and the butterfly effect. And yet, it never actually is about any of these films. Instead, Jenkins makes his film small, intimate and personal-it’s only about Chiron and his place in the world. The fact that these other themes appear at all is just because that’s the way life works. It’s the perfect study of how choices, actions and institutions determine the way our lives turn out, whether we want them to or not. It’s also incredibly hopeful, questioning if our own wants and desires can overcome these effects of life and chance. The film demonstrates this not with a bombastic tenacity or a blunt hammer, but quietly and skillfully. It invites us into its world, carefully laying everything out on the line, and hoping that the audience is capable of weaving these strands together into a charming little tapestry.

Of course, much of the credit belongs to Jenkins. Taking the idea from a play by Tarell Alvin McCraney, he has ended up writing a truthful, elegant little screenplay, feeling honest, poignant, and yet wholeheartedly real. It’s kind of infuriating anyone is capable of writing something this perfectly realistic without feeling forced. And then when coupled with his keen eye and an ability to make his film flow like the ocean that serves as a motif, he emerges from the film a wunderkind, the poster child for the next era of Hollywood. He captures Miami with a beauty and a passion usually reserved for films about New York, and usually made by Spike Lee or old-school Woody Allen, making the city pop off the screen with every hue of every color (particularly blue, black and red) permeating not only the screen, but our world as well. Meanwhile, these gorgeous images are accompanied by the best score of the year, wistfully written by Nicholas Britell and harkening to an age of nostalgia and beauty, a time long since past that we hope can return again.

And yet, whenever a normal film would ramp up the score to tell us how to feel in that particular moment, Britell falls silent, letting the actors’ faces speak for themselves. And what faces-and performances underneath-these actors have. This entire ensemble is working at a pitch perfect level. Each actor playing Chiron and Kevin wows, from eight on up. Obviously Hibbert, Sanders and Rhodes get the meat of the material, and have the harder job playing it stoically, but I don’t want to undersell Piner, Jerome and Holland, who sell each of their dramatic moments and make Kevin an interesting and empathetic foil for Chiron. If the film has a standout, it’s Ali, whose Juan could be a relatively stereotypical character, as the “Drug Dealer with a Heart of Gold” is already as well worn as its “Hooker” cousin, but instead becomes a complicated, sympathetic portrayal, showing his kindness, self-awareness, and flaws, all at the same time. A key moment late in the film’s first part is enough to earn him an Oscar nomination. As for the women, Naomie Harris is both an asset and a setback, as her performance sometimes starts to become too caricature-ish, especially in the first two parts, when she plays exactly what you’d expect in a movie dealing with crack addicts. However, a scene coming in the third act completely salvages the role, with Harris calling upon every bit of her talent and stripping away her trademark beauty to deliver a painful monologue that serves as some of the best of the film. Much more impressive is Monáe, who does much more with much less, making Teresa the film’s most wholeheartedly kind figure, providing Chiron the caring mother he always wanted.

Moonlight is one of the best films of the year. While there were a couple of small moments that took me out of it, it is but a small fraction of an otherwise astounding film. It is powerful, touching, and emotional, and will stand as a groundbreaking achievement for years to come. From the acting, to the direction, to the script, to the score, to the cinematography, everything is fashioned to the best of everyone’s abilities, and it shows in every moment. In short, go see Moonlight.