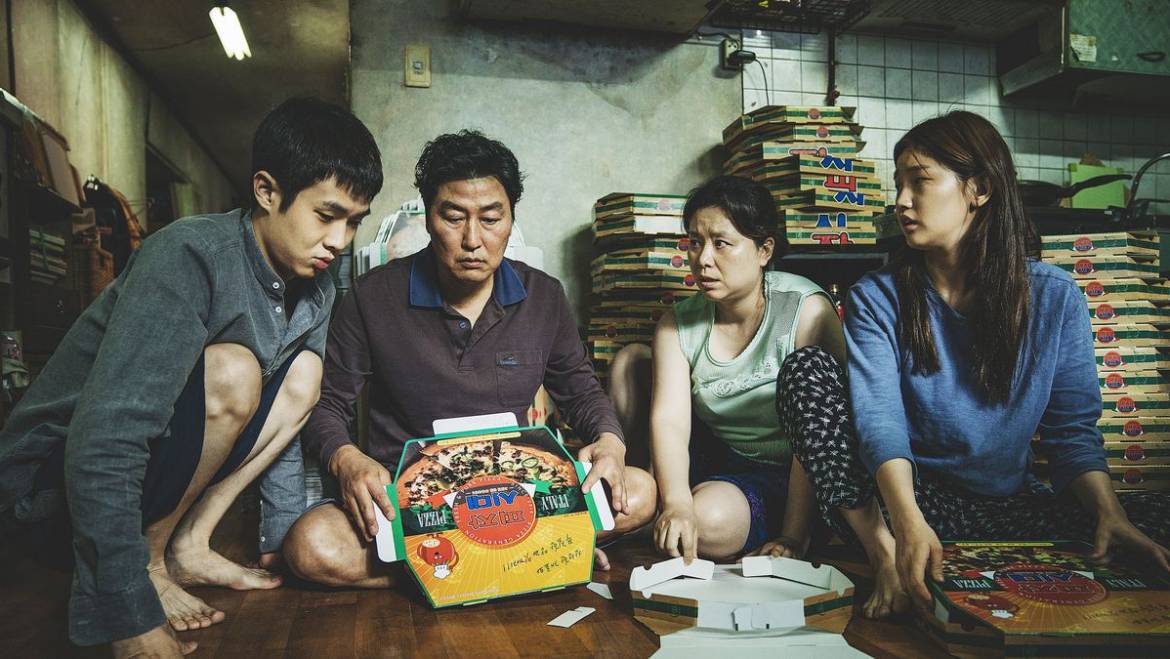 Well, the Screen Actors Guild Awards have come and gone, and not only were they the most pleasant awards show in ages, but also promised a fascinating Oscar race to come as Parasite proved its potential with a win in Best Ensemble.

That’s right, Bong Joon Ho’s incredible comedy-thriller-satire beat out The Irishman and Once Upon a Time…In Hollywood to take home the most coveted prize of the night. It’s not really that big of a shock – the film had a groundswell of support, “frontrunner” Hollywood was starting to weaken, and you could tell the direction the night was headed when the cast received a standing ovation when they introduced the clip package. However, that doesn’t take away from the power in the moment, when Eugene and Dan Levy read out the winner and the incredible cast of Korean actors had their moment in the spotlight (particularly Song Kang Ho and Park So Dam). Not only has the film become the first international ensemble to win this award (the only other international film nominated was 1998’s Life Is Beautiful), but it is now in contention to compete for Best Picture at the Oscars. I’ll have a write-up on what this all means later this week or early next week, but make no mistake: you’re looking at a 1917 vs. Parasite Oscar run.

The other major acting categories in the film branch went about as expected. Laura Dern won Best Female Actor in a Supporting Role, and gave an expectedly charismatic speech. The same goes for Renée Zellweger, who gave an eloquent, charming speech that reminded the world of why we loved her at the beginning of the century. Meanwhile, Brad Pitt gave his funniest, most heartfelt speech yet, combining quips (“Do you think this will look good on my Tinder?”), self-deprecation (“This was a hard role: a guy who does drugs, takes his shirt off, and doesn’t get along with his wife”), and addressing the elephant in the room (Tarantino’s foot fetish). I say this every time he wins an award, but if he hadn’t sewn his Oscar up by now, he just did last night. And even Joaquin Phoenix gave his best speech yet – he addressed his aversion to the Oscar race by spending his time praising his fellow nominees and how their work inspired him to be a better actor. The biggest takeaway from the night was “great speeches.”

While the film categories shied away from upsets and shocks, the television side more than made up for it. Sure, there were the obvious wins, like The Crown winning Best Drama Ensemble, Michelle Williams winning Best Male Actor in a Miniseries/TV Movie, or Phoebe Waller-Bridge in Female Actor – Comedy (and giving her final, best speech yet that combined her heartfelt love and her wicked sense of humor). But after that, nothing panned out as expected. Bill Hader and Andrew Scott lost Best Male Actor – Comedy to Tony Shalhoub for Marvelous Mrs. Maisel, who seemed legitimately upset that he had to give another speech. The Maisel love continued onwards as the show went on to win Best Comedy Ensemble, leaving the cast speechless that they’d ended Fleabag’s winning streak (they ended up pulling an Adele and talking about how much more deserving the British knockout was). Still, at least Maisel was considered a contender. Jennifer Aniston and Sam Rockwell both gasped and swore in shock when they beat out Olivia Colman, Jodie Comer, Jharrel Jerome, and Russell Crowe. Rockwell gave yet another charismatic speech (the reason actors love him), while Aniston dedicated her shocking upset to, surprisingly, Adam Sandler, who was recently snubbed at the Oscars. And Peter Dinklage won his final award for Game of Thrones, and seemed relieved that the streak is finally over.

So that wraps up the 26th Annual Screen Actors Guild Awards. What does this all mean? I’ll have a write up by the beginning of next week as the Oscar race begins to take shape. But there’s a few things we know for sure. We know that the acting races are all but over. We know that Parasite has real support. And we know that no matter what happens, this will be the year a foreign language contender made a real play for Best Picture, and broke a series of stats along the way. You can see the full list of winners below.