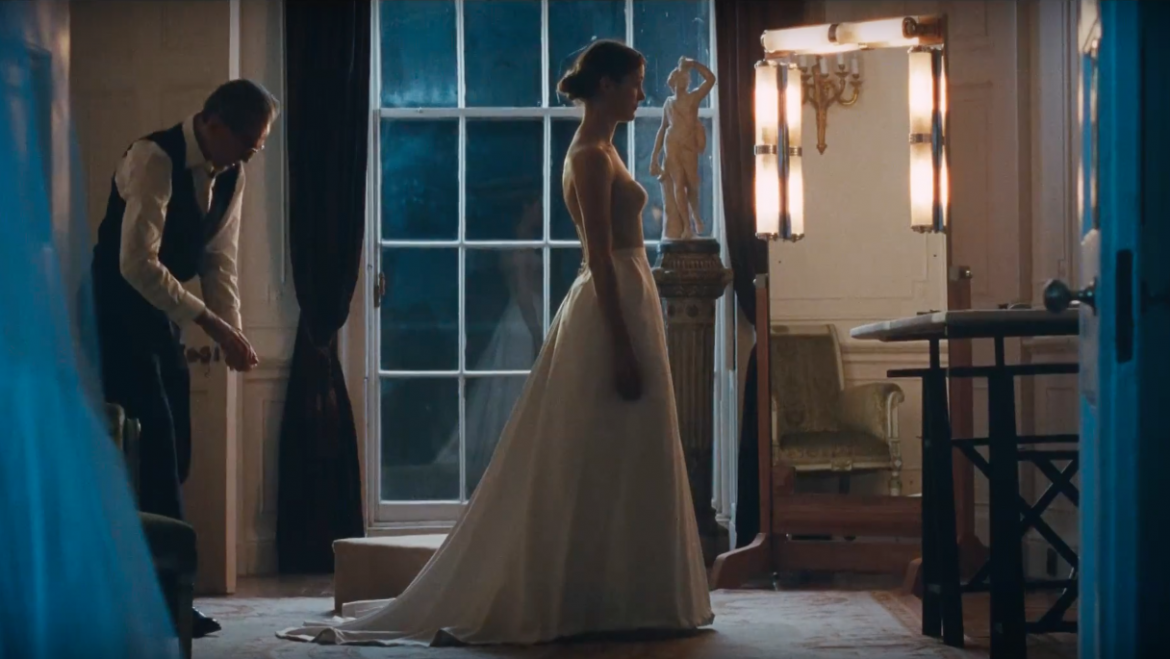 I honestly don’t know how to describe a movie like Phantom Thread. I’ve been struggling to do so since I saw the movie a week and a half ago. The best description I’ve managed to come up with is that it is a forties movie with seventies sensibilities, and it also might be a romantic comedy, maybe. Paul Thomas Anderson’s weird, brilliant mind is working in ways that most other people, myself included, cannot entirely fathom. However, when he does it with a keen eye, a noble pursuit, and a truly wonderful story, he can create movie magic. And that’s what he does here, changing the game with his elegant, sprawling epic about the insanity of love.

In late 1950s England, there is no greater figure in the fashion scene than Reynolds Woodcock (Daniel Day-Lewis). A committed bachelor both by choice and by disposition, Woodcock is the symbol of class: he eats the finest of foods, drinks the finest of teas, and designs the finest of clothes for high society, including starlets and royalty. He is quite content to live out his golden years alone with his sister, Cyril (Lesley Manville) when he meets a waitress on his trip to the country, Alma (Vicky Krieps). Woodcock and Alma are caught up in a whirlwind romance, and he brings her back to London to be his muse, lover, and confidant. However, as their equal stubbornness threatens to tear them apart, they each have to resort to drastic measures to maintain both their happiness and their personalities.

The first thing you notice when you watch this film is how remarkably stunning it is. Every single detail of this film screams classy. It’s swooping, majestic, and royal in a way that only Old Hollywood can be. The cinematography is rightfully grandiose and respectful, framing each face in an open, deliberate close-up, and displaying the elaborate sets and the flawless costumes perfectly. And when I say these costumes are flawless, I mean they are flawless. Each dress flows like an individual miracle, popping off the screen with pizzazz and charisma. Meanwhile, the men (Day-Lewis in particular) are fitted in handsome suits, adorned with fabulous bowties. Hell, they even get suit pajamas – I repeat, SUIT PAJAMAS. Look, I’m not saying we have to live in this era, but can we at least bring back the outfits? The editing is reminiscent of the French New Wave movement, jumping ahead in time and cutting abruptly in order to make a point about life’s progression. There’s a sequence of the main duo driving to a date that feels intentionally kitsch and respectfully nostalgic for the fake car rides of old, and I thought it was an excellent touch. And the editing also knows how to make this a sexy movie as opposed to a sexual movie. For a film about the realities of a relationship, there is no sex to be found. Like the forties, the sexual tension here is built in other ways. This is found in the traditional ways, such as witty banter and the sexual act of eating, but Anderson also pushes the sexuality further by focusing on the sexiness of dressing. It may sound weird to declare the sexiest thing about a film is the act of putting on more clothes, but it works here, because it captures the intimacy that goes into each decision, each stitch, and each touch between the artist and his muse. When layered with a graceful score by Jonny Greenwood and mixed perfectly with each sound effect, the entire production screams of intelligence, sophistication, and style in a mesmerizing tour-du-force.

However, this film is more than just a pretty production to look at. Whenever you’re dealing with a Paul Thomas Anderson film, it’s always good to try to decipher what themes he’s interested in exploring. You see, each Anderson film focuses on a different universal theme, one that each person encounters at some point in life, and he makes it his goal to express his fears, questions, and opinions on it. This includes Boogie Nights’ exploration of fame and sex, There Will Be Blood’s exploration of greed, The Master’s exploration of faith, and Magnolia’s exploration of family. Here, Anderson seems to be trying to understand love. More specifically, he seems to be trying to understand why we act the way we act in relationships, and if it is possible for two people desperately in love to stay together even if their personalities are diametrically opposed. What’s fascinating about this film is that while it is staged as a drama or a thriller, it is, in fact, neither of those genres. This is Lubitschian high comedy, a British comedy of manners to a T. Lubitschian comedy focuses on classy individuals exchanging dry barbs as a means to making a grander statement about themes and society. This film is a critique of toxic masculinity, and the faux-chivalry often seen in both the myth of the 1940s rom-com – the romantic gestures presented here are often painted as ways of being controlling – and of the myth of the tortured artist.

The film has a lot to say about the romanticized portrayal of how difficult it is to be a great artist – some good, some autobiographical, and mostly bad. Reynolds Woodcock is portrayed as controlling, precise, egotistical, vain, and spoiled. He lacks spontaneity, and while we appreciate how talented he is with a sewing kit (just as we would if he were an author, a painter, or a director), we are supposed to recognize that his behavior is insufferable. While he appears, and indeed is, charming when we first meet him, he slowly reveals his true nature as the film goes on, thanks to a series of well-written and dryly hilarious barbs. He constantly belittles Alma for every little thing, from her looks (“You have no breasts. Don’t worry, that’s a good thing”) to her taste (“it’s right because it’s right” and “Maybe one day you’ll change your tastes” stand out as the most humorous) to the actions of those around him (Obviously the stand-out here is “There is entirely too much movement at breakfast,” which is easily the best line in any movie this year, but I am also partial to the way Day-Lewis delivers the line “TAKE THE F*CKING DRESS OFF, BARBARA!”). He’s a modern-day Heathcliff, or Mr. Rochester, or Mr. Darcy – he’s romantic to think about, but a monster in practice. And the film knows this about him; it never takes his side, or endorses this behavior. It simply presents it as a character flaw. However, while this all sounds problematic and traumatizing, what makes this film shine is that Alma isn’t perfect either. She’s equally stubborn, she pushes back against his comfort zone and beliefs, and she has a dark streak a mile wide. They are equally stubborn, equally messed up, and their personalities drive each other crazy. And yet…they can’t live without each other. They are the only person who could possibly put up with their infuriating traits, turning their relationship into a Gothic love story, or a prequel to Who’s Afraid of Virginia Woolf? I don’t want to spoil the turning point of this movie, but I will say it is a fascinating, hilarious decision that drives to the heart of everything this genre holds dear: satire, high comedy, hyperbole, and a big helping of Gothic surprise. What I can say, however, is that the message is clear. When you’re in love with someone, the cycle of infuriation will consistently repeat itself. Each person will piss off the other, and stupid little fights will break out with the intention of trying to gain the upper hand. However, it is, in the end, completely worth it. This is a rich, smart film about what we do when our worst traits get in the way of falling in love.

There are really only three performances in this film, but my God are they great performances. Much has been made of the fact that this may be Daniel Day-Lewis’ last film, and if it is, at least he’s going out the way he came in: cool, sexy, and the greatest actor of all-time. He relishes in each line delivery and has complete control over every flourish that Woodcock delivers. True, he’s a monster, but there’s a soul to him, and he stands tall with similar performances like Laurence Olivier in Rebecca and Wuthering Heights or Orson Welles in Jane Eyre. Meanwhile, Krieps stands tall by going toe-to-toe with the world’s greatest actor her first time out. It’s true that there isn’t quite enough to Alma’s character, and we don’t know much about her, but quite frankly, we don’t quite need to. Krieps tells us everything we need to know, carefully guarding each line and stare to great effect in order to make herself a mystery to both her partner and the audience. She even makes the simple act of pouring water a political statement, and I am here for it. However, if the film has a stealth secret weapon, it’s Lesley Manville as Cyril Woodcock. In a straightforward comparison to Hitchcock’s Rebecca (supposedly the film’s inspiration), she would be the Mrs. Danvers, and while she’s very much a better person than Judith Anderson’s great creation ever was, she still wears that title with pride. Not much is known about Cyril, especially the way Manville plays her – is Cyril gay? Incestuous? A sociopath who just likes watching the world burn? Who cares, especially when Manville delivers wonderful lines like “You have the ideal shape. He likes a little belly,” and the immortal “Don’t pick a fight with me, you certainly won’t come out alive.” She is a delight in the role, and she perfectly rounds out a small, but memorable ensemble.

Phantom Thread is the type of rare art film that isn’t made anymore. It’s elegant and graceful in a way we haven’t seen before, with the added benefit of reassessment and growth. Anderson is truly a master behind the camera, exploring his own demons and questions through his art in order to get to the heart of what makes us tick. He’s made a great film about love overcoming everything, even at the risk of personal well-being. It’s not quite perfect, but it’s a special film nonetheless. To paraphrase a line from early in the film, when things were still romantic for the couple: “I feel like I’ve been searching for a film like this my whole life.”