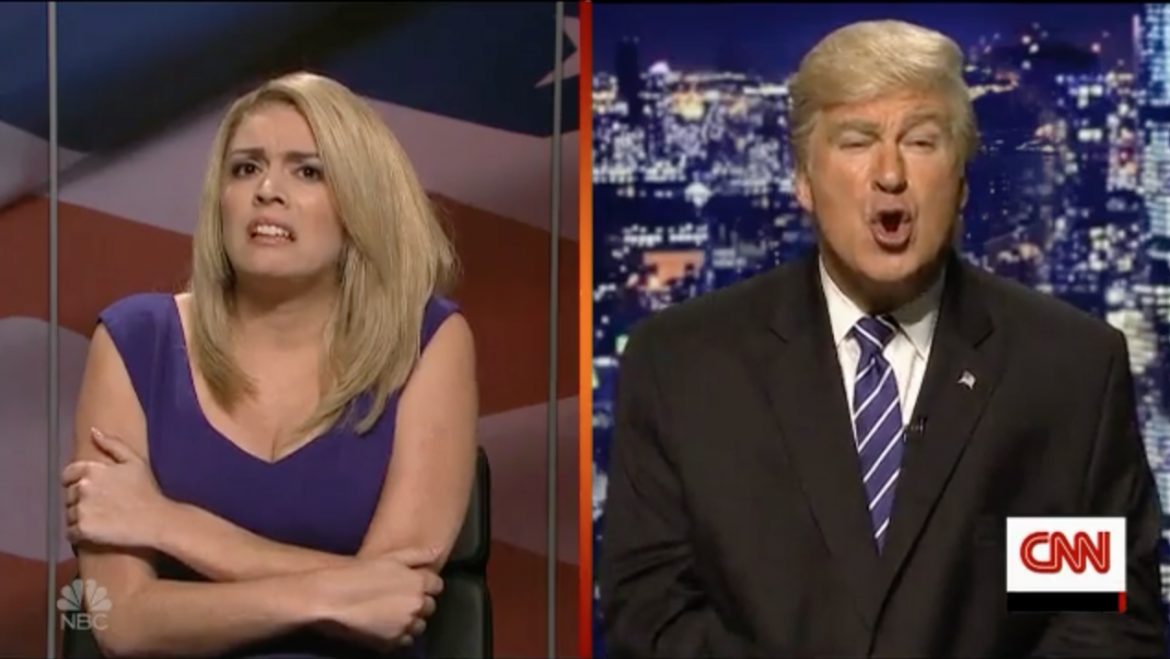 Ed. Note-This article was supposed to go up on Sunday. Unforeseen circumstances prevented that from happening. My apologies, here is the original article

I’m beginning to think that Saturday Night Live is going through a Golden Age, and we’re not even realizing it. We knew they had something special with Taran Killam and Kate McKinnon leading the pack, but they were bogged down by weak writing and guests like Donald Trump (that was a painful episode even if you like him as a candidate). Things looked bleak after Killam and Pharoah left, but something strange happened: the writing improved, and the cast found a groove that has been building all season, but never quite been all the way there. And with two great guests in Margot Robbie and now Lin-Manuel Miranda, this might be the best cast since the early 90s.

How did Miranda do as a host, you might ask? The answer is “Spectacularly.” He was so good, it’s easy to forget he was the host and not just a part of the cast. He had the energy of a kid living out his dream, and he did exactly what you’d hope for the show: the jokes you’d expect, but with a new twist to shake things up. It’s what they did in the phenomenal Opening Sketch, it’s what they did with Wells Fargo, and its what they did trying to make a Hamilton reference, resulting in a fantastic opening monologue. The show has rarely felt so natural, and it’s to the show’s merit, 100%. Before listing the winners and losers, a quick reminder: Leslie Jones, Kenan Thompson, Beck Bennett and Kyle Mooney are Immortal Winners, meaning they won’t appear on this list unless they do something incredible, although all four are major contenders, especially Bennett for that Pence impression.

Also, a special shout-out goes to Mikey Day. He mostly stayed in the background throughout the episode, giving great performances as side characters, but his Tim Kaine is spot on. Like, really spot on. “Hola, Elaine” is the line of the night.

Great Sketch: For this week’s Great Sketch, I wanted to make a concrete decision. But I just couldn’t. So I will be naming not one, not two, but three picks for the Best Sketch. The first is the Cold Open. Sure, they went for all of the easiest jokes, but they took those easy jokes and made them better. Their VP debate stuff was great, from Villaseñor, to Day as Kaine whining, and Bennett’s Pence being slow, boring, and denying some things that were absolutely true. Then you had Baldwin’s Trump come in and just let loose for a good three minutes. And then you had McKinnon’s Clinton celebrating. All jokes I had predicted before the show started, but still somehow feeling fresh and funny. The second sketch of the night is the one I’ve talked most about. “Crucible Cast Party.” Some background. I was involved with theater all four year of high school. The most memorable nights of the productions were the Cast Parties. The High School Theater Scene’s Royalty would have us over to their house for a “reckless” party-that is to say, the “bad boy” kids could find a way to cut loose if they wanted to, but most of us wandered around in old age makeup singing songs from Wicked and awkwardly flirting with each other. Since the sketch aired, my friends from the drama scene whom I’ve kept in touch with have been sharing and commenting on this sketch. This isn’t just something absolutely funny, like “First Got Horny 2 U,” or musically excellent, like “Do It In My Twin Bed.” While it is both of those things, this is something else entirely. This is the Uncanny Valley. It crosses over into a too-real realm that makes you laugh and squirm uncomfortably at the same time. Kudos to SNL for capturing that emotion. The third sketch, and the one most ignored, is “Wells Fargo.” I’m a big fan of The Music Man. I’ve listened to that soundtrack thousands of times. Seeing Kyle Mooney as youn Ron Howard was charming, and the song was cute. And then the joke came. I consider myself to be politically aware, and I follow the news daily. But when Miranda came on as Harold Hill the Wells Fargo Manager who wants to con the kids into buying bank accounts, my jaw dropped. Some of my favorite jokes on the show are when things take a hard left turn into a dark territory, like last year’s “Farewell Mr. Bunting,” or the sketch where The Little Mermaid’s “Under the Sea” is interrupted by Bin Laden’s sinking corpse. They’re just so dark, but brilliant. That’s exactly what happened in turning The Music Man into an indictment of a bank caught in fraud. It’s brutal, but funny. And it stood out to me.

Had Promise: Stranger Things-This sketch had all the makings of a great sketch. Miranda, Mooney and Sasheer Zamata were great as the kids, and the idea of exploring Lucas’ parents is a funny one. The racial jokes were pretty solid (I knew it was coming and I still laughed when Sherriff Hopper comes out and Jones and Thompson scream “Ahh! The Monster!”). And McKinnon and Villaseñor were great as Eleven and Ryder. However, it just never had that “wow” moment that makes sketches great. The jokes were all too predictable to be laugh out loud funny, and while that doesn’t eliminate a sketch, it does hurt its chances of being memorable. It was a good sendup to a great show, but won’t ever be anything more than, “Oh, yeah. That was pretty good.”

Bad Sketch: WWII Scene-Ok, this wasn’t necessarily bad, per se. But it just didn’t live up to the promise of 12:55. This is where some of the weirdest, darkest sketches live. Like Kate McKinnon as the lesbian cat lady. Or Strong and Bayer’s Porn Star Salesgirls (one of the show’s greatest recurring sketches, ever). So what brilliance awaited us here? An AMC showing of a war movie where the shot guy asks his commander to hide his buttplug and song lyrics. Yawn. Nothing original here, other than Pete Davidson being Pete Davidson and Mirand demonstrating solid timing. It would have been a so-so sketch anywhere in the show, but in the beloved 10-to-one slot, it was atrocious. Oh, and that bit with Jimmy Fallon was so egregious not even Tina Fey could save it. That’s just a side note, not related to the sketch in question, but worth mentioning.