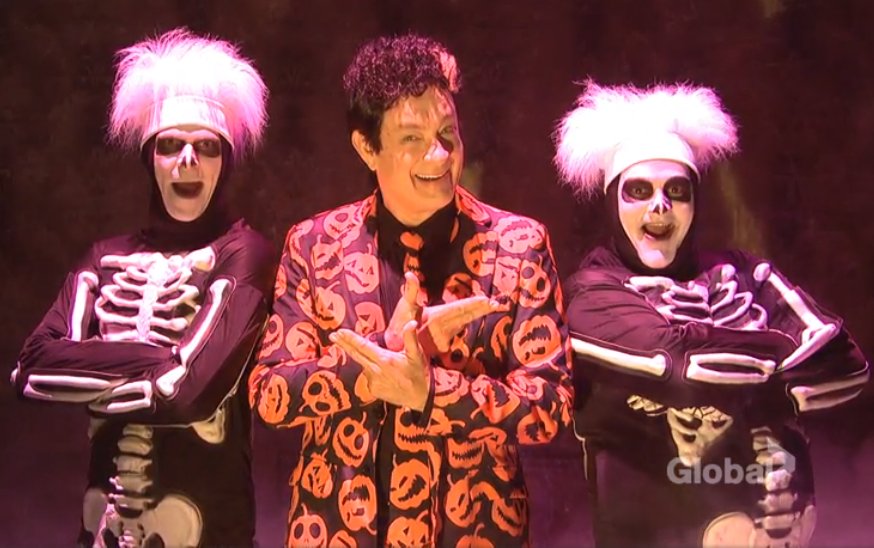 I didn’t get a chance to watch the Saturday Night Live from two weeks ago, well, live. I was in the middle of an incredibly hectic work schedule, and I ended up choosing to sleep so I could take my early shift the next morning. I was going to not do a write-up, but I found out that last week was the show’s bye week. Therefore, I’ll give you a delayed recap now.

I don’t think it’s too soon to call Tom Hanks a national treasure. He fits into this show with a natural charisma usually seen with Alec Baldwin (who also appears for possibly the last time), John Goodman or Justin Timberlake. Last week’s episode was no exception-Hanks fit in like he was one of the cast, making for one of the funniest episodes in years. From the debate to the recurring sketches to the stuff Mikey Day comes up with, everything seemed to work this week. I’m beginning to wonder-are we experiencing an SNL Golden Age in real time? I mean, we usually don’t realize how great things are until the time has passed (look at the bad reviews during the Murphy era and the time when Farley, Spade, Hartman, and Sandler were putting out classic sketches), but things seem extra strong now. I don’t want to jinx it, but this may be the show’s best work in over a decade. We’ll have to see how things go from here, but for now, I’m ready to talk about what made this show work.

Tom Hanks: How great is Hanks? Not only does he show us the sense of fun that has made films from Big to Toy Story fun for us all, he absolutely commits to every sketch they throw at him. Whether it’s playing Chris Wallace, and doing it rather well, or playing a kindly Trump supporter, or playing Sully again, or putting on a ridiculous coat for a Mikey Day sketch, Hanks was game for everything, and it proved exactly why he’s such a beloved host on top of being such a beloved actor.

Leslie Jones: Why Jones? Well, even if you take out the fact she stole almost every sketch she was in, even if she was just a minor character (look at David Pumpkins and Black Jeopardy again if you don’t believe me). Look only at her monologue during Weekend Update. Look, Jones went through a terrible traumatic event earlier this year. To have your private computer and phone hacked, and then having sensitive material leaked online is something no one should be subjected to. However, not only does she brush this off during her monologue, and find the humor in the situation, she calls out her attackers. And she does it in a funny way! It’s a truly remarkable speech, and a remarkable performance, and it shows why Leslie Jones is, in many ways, one of the show’s biggest secret weapons.

Mikey Day: Speaking of secret weapons, Mikey Day. He may have only had a small appearance or two throughout the show, but it’s what he did behind the camera that was most impressive. How great is David Pumpkins? Were you a fan? That’s good, because Day wrote it. This has his fingerprints all over it-he is single handedly responsible with bringing the avant garde anti-humor scene to Saturday Night Live. He first did it with the fantastic Kevin Roberts sketch, and he arguably one ups it here. And what’s even better, he appears in the sketch, and he seems like he is actually enjoying himself! I should explain-most cast members on SNL have a persona-for example, Bayer plays every sketch like she’s lovably awkward, Mooney plays every sketch intentionally bad, and Davidson plays every sketch like he shouldn’t be there. Day’s shtick, from day one, has been that he never realizes he’s in a comedy sketch. He plays it completely straight, even if he isn’t the straight man. Yet here, as one of the skeletons, he looks like he’s absolutely loving life. And it makes the sketch even better! Watch that video and look at the smile on his face! It’s adorable! Day is a writing genius, and I wouldn’t be surprised to see him become head writer one day, and maybe even be the next Adam McKay, getting himself an Oscar nom or better.

Best Sketch: Tie-Look, there were two sketches that were fantastic in Hanks’ fantastic outing. I honestly couldn’t decide which was better: the surrealist masterpiece, or the socially relevant piece of commentary. Both had their pros, and both had their cons. Finally, I decided the choice was not worth the stress, and I will give a shout out to both of them. The first, obviously, is “David Pumpkins.” I mean, how could I not? The sketch starts out fine, with the normal cheesiness of an SNL sketch. And then Hanks comes out. Hamming it up, speaking in weird, ridiculous non-sequiters, followed by ridiculous dancing. And it. Is. Glorious. The second sketch I want to shout out is “Black Jeopardy.” “Black Jeopardy” has always been a funny recurring skit-with a super white person who thinks they understand African-American culture (usually a professor at BYU or a twenty-something liberal), only to be confronted with very specific lower-class questions, and realize they know nothing about life as an African American, losing terribly. However, this time out, they flipped the script entirely: they have on Hanks as a Trump supporter who actually does understand these answers. And while that doesn’t seem like much, it actually is a really intelligent joke-the reason these people understand each other is because both have been screwed over by classism, and are, at their root, similar people only kept apart by a lack of understanding and racial/political divisions. It’s a weird, touching sentiment, and I applaud them for going for it.

Had Promise: “Cockpit”-The idea of a Sully sketch is good. The idea of Sully being forced to sit in the co-pilot seat after his miraculous landing is good. Him acting childish as Alec Baldwin tries to fly the plane is good. It’s a bunch of good ideas, but they never try to actually be great. And when you have someone as funny as Hanks, that just seems like a letdown. I dunno, I don’t want to rip this sketch down too much, but it just wasn’t as good as a sketch about Sully could have been.