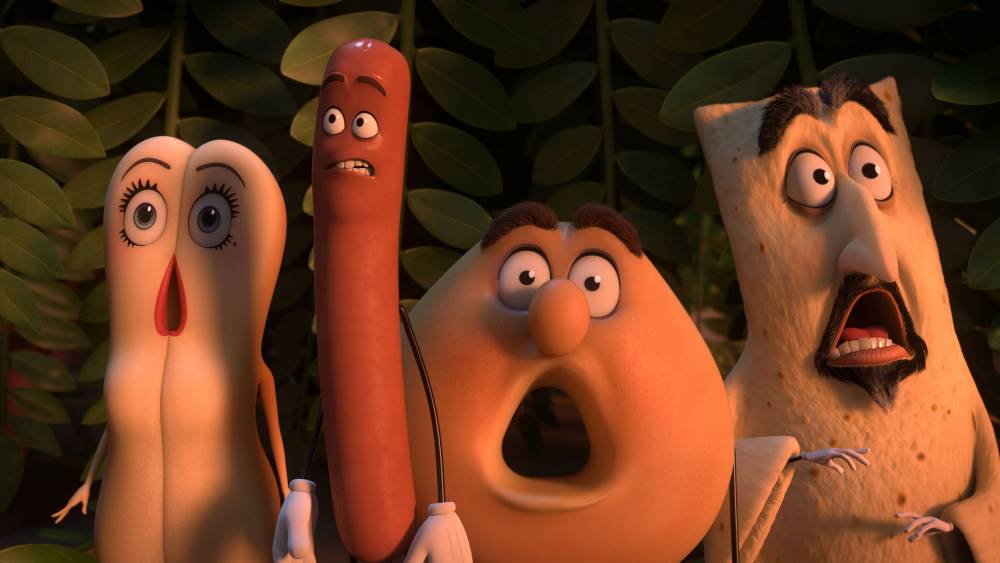 Right from the get go, Sausage Party wants to make it clear they are burning Walt Disney in effigy. Putting aside more blunt moments like a bumper sticker referencing “Dixar” or the fact that all of the food items in the film wear little white gloves, the film opens with a massive musical number written by Alan Menken, complete with cursing, scatological humor and a Nazi juice/Jews joke that tips you off right away that there may be more to this movie than the producers were letting on. As it turns out, it’s like Sausage Party built a giant play structure that’s incredibly detailed and fun to look at, but the kids just don’t know exactly how to use it. The producers had all these themes and ideas that they wanted to explore and satirize, and they handled them all beautifully. However, they just had trouble filling in the gaps. I’m pretty sure this movie was conceived after Seth Rogen and writing partner Evan Goldberg binge-watched South Park and said, “Well, we can do that,” before getting stumped and filling the rest with jokes about sex, drugs and cursing-Rogen’s comedic fallback. The final result is a fascinating little film that made me laugh at how far they were willing to go, and dazzled me with great ideas, but never committed to anything long enough to be the great film that it was trying to be.

The film takes place in the magical world of a supermarket, and focuses on a weiner named Frank (Seth Rogen). It’s Fourth of July Weekend, and Frank is hoping to be chosen to head to the Great Beyond with his girlfriend, Brenda (Kristen Wiig), a hot dog bun. They know that once they get there, they’ll be allowed to Make Love the only way food knows how-the sausage sliding into the bun (yes, there are a million sex jokes about this, some laugh-out-loud funny, a lot just “meh”). They are picked by the humans (or “Gods,” as they are named. More on this later), and are ready to head to their destiny. However, a recently returned Honey Mustard (Danny McBride) warns them all that the Great Beyond is a lie before shattering himself, causing mass catastrophe and resulting in Frank and Brenda to fall out of their packaging. This leaves them on a quest to return to the front of the store, traveling the many different aisles of the world alongside a lesbian Taco named Theresa (Academy Award-nominee Salma Hayek) and mortal enemies Vash the Lavash and Sammy Bagel, Jr. As they make this journey, Frank sets out to discover what happens when they reach the Great Beyond, and what the humans do with us when we get there. The answer, as seen through the eyes of poor child Barry (Michael Cera, because of course), is incredibly graphic and horrific.

Let’s take a minute to unpack the metaphor you may have picked out of that synopsis. Yes, the entire movie is a metaphor for religion and atheism. The “gods” are a made up idea to make sure the food remains calm on their march towards death. Over time, the belief was corrupted and things were added to it so the food can add its own agenda. These ideas are fairly interesting, and Frank’s existential crisis as he realizes that life may have no purpose is highly entertaining. I wanted more examination of these ideas. However, it fails to stick the landing. Allow me to use South Park (the gold standard of using comedy to explore high concepts) to explain this. The film is not too different than South Park’s episodes on Mormonism or atheism, as well as Parker and Stone’s musical The Book of Mormon. However, while the message of those works was “Look, whether or not religion is correct, those people are happy, and use it to live good lives, so what’s wrong with that?” In Sausage Party, Frank comes to this same conclusion (no, literally, that’s pretty much a line in the movie), but then continues to insult and berate people who still believe “the Song” (religion). Despite there being a blatant message, the film chooses to ignore it and move on from that point. That’s fine, but to have a complete disregard for your own moral is like taking the starting pistol and shooting yourself in the foot at the finish line.

However, a lot of their real-world jokes are, in fact, inspired. I don’t want to give a lot of them away, but I will examine the relationship between Vash and Sammy, because there are so many layers to that joke I want to unpack. Vash is a Muslim lavash who speaks with a thick Palestinian accent, who is angry because the bagels like Sammy have moved into and taken over their aisle. Sammy, with a remarkably Woody Allen-esque voice, explains that they had to move in because the Sauerkraut wanted to barbecue them. When Frank asks why they can’t share the aisle, they tell him to “F*ck off.” That’s a lot to unpack from one basic food-related metaphor, but it gets deeper as you explore it. If you know nothing about the cast going in, you’d assume that that bagel is voiced by Woody Allen. However, if you’re wise to the casting, you’d know that David Krumholtz, a very talented Jewish actor with a killer Woody Allen impression, is in this movie. So obviously he voices Sammy, right? Wrong. That’d be too easy. Instead, Krumholtz plays Vash. So who is that doing the incredible Allen impression. Academy Award-nominee Edward Norton. Yup. And not only that, that casting builds to one incredibly meta and outlandishly hilarious joke that I forced me to perform a double take. That casting decision is brilliant.

On top of Norton and Krumholtz, I want to give a special shout out to Nick Kroll, who voices Douche, a douche who is a douche. That concept seems pretty basic on the surface, but to hear the verbal tics and little decisions that Kroll made in creating his character is to learn exactly why he is one of the best comedic actors in the business. Sure it seems easy to play a douche, but to make the character unique, you need to develop the perfect Jersey Shore accent, you need to make him sound like that guy at your office who won’t shut the f*ck up about CrossFit, and yet still give him a pathos, where you hate him, but you sort of feel his pain, even as he absorbs the liquid of a Juice Box and declares himself “Juiced Up.” Kroll finds this balance and creates one of the most memorable animated characters I have ever seen, right up there with Dory, Edna Mode and Scar. Bravo, Kroll, bravo.

Yet as great as this cast is, I just wish there was more, ya know? These are some interesting themes, topics and ideas about our world and the next that Rogen is exploring, but he chooses to stop short and focus on the basic joke. Take Theresa the Taco. She is the perfect outlet to explore the concept of religious LGBT members, a topic not explored too often in pop culture. So how do they handle her character? About 1% emotional exploration, 99% jokes about her looking at Brenda’s rear and saying, “Nice buns, chica.” Sure, it’s chuckle-worthy on the surface, but there’s nothing to it. It’s a wasted opportunity. Basically, I’m just a little annoyed that this movie didn’t choose a clear way it wanted to go. It can be clever, like that Vash/Sammy joke. Or it can be crass, like the final twenty minutes, which are amongst the most horrifyingly humorous twenty minutes I’ve ever seen on film, to the point I wonder how they got an R rating. You can be one or you can be the other, but unless you are Trey Parker, you cannot be both.

I think the best way to describe this movie is “too smart for its own good.” It’s clearly smarter than your run-of-the-mill Judd Apatow gross-out swearfest, which is a fantastic trait. But it wants to use its brains to do just that. It’s like if Stephen Hawking decided to use his brains to just make really good poop jokes. It’s funny at first, but you become a little disappointed that he’s wasting his potential. That’s how Sausage Party is-you know it’s smart, and you’re interested in what it has to say, but you can’t get past the fact that these brainy jokes eventually just lead you back to bong jokes and sex puns. I really enjoyed the film, but it just had the potential to be great, and it settled for “good enough.”