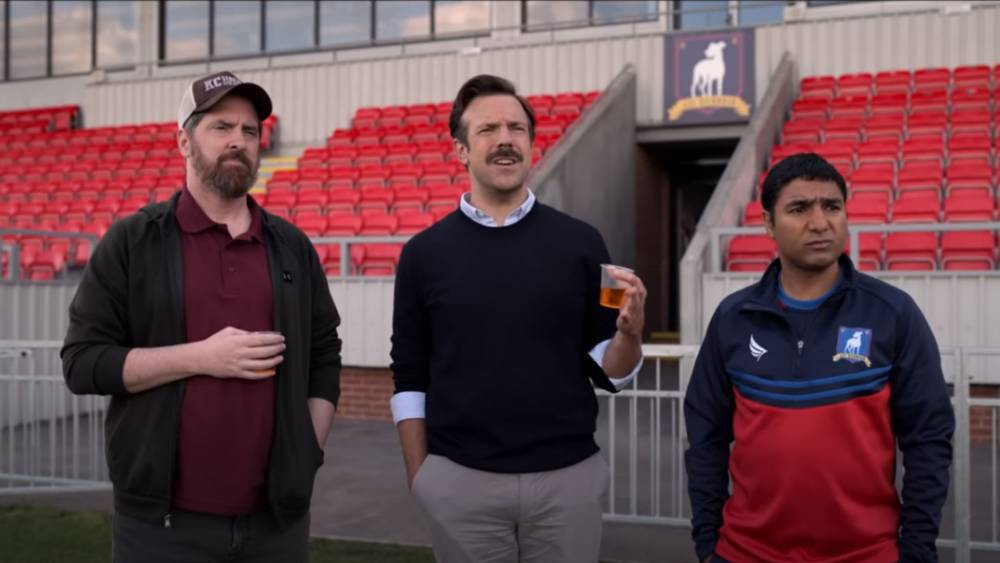 Well, the 73rd Primetime Emmy Awards have come to a close. And overall, it was a night that gave us mostly what we expected – obvious winners, a couple big surprises, and a laidback atmosphere that showed us both the best and worst that award shows have to offer.

I suppose the biggest news of the night was the total sweep of The Crown. It became the second show in history, and the first Drama, to win 7 out of 7 awards during the ceremony. Mostly this meant beating itself; for example, the episode “War” pulled off the upset over another Crown episode, “Fairytale,” in Best Director. And Olivia Colman pulled off the upset over her frontrunner costar Emma Corrin – a move that’s sad for young Corrin, but did mean that we got another top-tier Colman awards speech (“Micaela Cole f*ck yeah!”). But this also meant that The Crown boys beat the two frontrunners in the acting races. For Josh O’Conner, this wasn’t too much of a surprise – Billy Porter already has a statue, and O’Conner was one of the best parts of the show. But the Tobias Menzies win just felt…wrong. In every possible way. It’s not that Menzies didn’t deserve to win – he’s a consistently excellent actor. But this meant that he pulled off the upset over the late Michael K. Williams, who was so significantly a sure thing that Menzies didn’t even show up. It sucked the energy out of the room on a night where only one person of color won an award. Nevertheless, this was a big deal for the never-won royalty drama, and a big deal for the industry, as it meant that Netflix has finally, at long last, won an industry prize. It’s just a shame they were beaten by Apple TV+ by a few minutes…

That’s right, Ted Lasso won the Best Comedy prize, as was expected. And unlike The Crown, its victories felt genuinely invigorating. I accredit this to two factors. First, the speeches by the winners were just so fitting. Hannah Waddingham started the night off with one of the best award show speeches I’ve ever heard – perfectly funny and poignant and lovely…not to mention high energy. She was immediately followed by Brett Goldstein, who was legitimately touched to win the award – and paid great tribute to his character with a couple of perfectly dropped (and bleeped) f-bombs. Jason Sudeikis gave a particularly moving – and funny – speech thanking the people in his life, as well as roasting his former Saturday Night Live boss Lorne Michaels (who, despite winning in his category, looked legitimately annoyed he had to be there). And when the show won Best Comedy, we finally got to witness a Bill Lawrence acceptance speech, after twenty-five years of creating top-tier comedies. The second reason I think Lasso avoided the Crown backlash is because the Comedy categories were more evenly split. While Lasso dominated the acting categories, the technical categories went to the wonderful HBO Max series Hacks. Not only did Jean Smart unsurprisingly win Best Actress (and earn a standing ovation for her moving, lovely speech), but the show won awards for writing and directing as well. This seems like a fair split. Lasso is beloved because of the terrific characters. Hacks is beloved because of the perfectly timed jokes. It was a great way to honor both shows without rippling the waters too much via overplayed Marcus Mumford music.

The tightknit race went to The Queen’s Gambit, who immediately blew all of the goodwill earned over the last year thanks to creator Scott Frank, who went past the band playing him off not once, not twice, but three times in his first speech alone. As I posted on Twitter the night of the awards: “Once is impressive, twice is surprising, three times is galling.” And he didn’t help things with an equally rambling speech at the end of the night. It says a lot that my father’s recap of the evening was “Who was the jackass who wouldn’t stop talking?” Faring much better was Mare of Easttown, which won three of the four acting categories (one of which was a slight upset that I called) for stars Kate McKinnon, Evan Peters, and Julianne Nicholson. As for the final two awards of the night – Writing and Best Actor – we got to witness the only two real shocks of the ceremony. The first was mild, when Micaela Cole pulled off the upset for Best Writing on I May Destroy You. It was a win I predicted, but was still surprised actually happen. It was equally impressive when she gave the best speech of the night. The second, and biggest, surprise came when Ewan McGregor won his first Emmy for Halson, a show not many people liked and for which he was presumably nominated only to fill out the five slots. I’m never upset to see McGregor win, but my God, was that surprising. Thankfully, that was it for the shocks, as the other major categories went to RuPaul (duh), Hamilton (I suppose), and Last Week Tonight, which celebrated its fifth straight win with a touching tribute to Conan (who John Oliver believed should have won) and the late Norm Macdonald.

So, now that we know who won the awards, how did the show go overall? Well, it was something of a mixed bag. The biggest takeaway from the night is that shows like this need a host, and it needs to be someone who truly has a love for the job. Cedric The Entertainer was a bizarre, but weirdly fitting, choice for the job. He tied in well to the night’s theme of “fun, but not high energy.” At his best, the show worked wonderfully. His monologue was solid, and some of his bits (like a “No Emmy Support Group” for Jason Alexander, Alyson Hanigan, and Fred Armisen) landed pretty well. It’s weird, I haven’t seen a host like this at an awards show since…maybe Chris Rock at the Oscars in 2015? But not every joke landed. Cedric seemed to want to pay tribute to the most talked-about TV moments of the last year. But this meant dated jokes about Tom Brady, his long-over show The Soul Man, and, in the most painful moment of the night, a reference to the fly that landed on Mike Pence’s head. Remember that moment? No? That’s because we’ve all collectively blocked it from our minds. It’s such a bad and dated reference I didn’t even realize what he was doing until it was way too late.

Thankfully, several of the presenters showed up to save the day. Seth Rogen’s opening bit was amazing – funny and scathing at the same time. I almost want him to host more award shows going forward. I laughed a lot at the Bowen Yang big (he’s so great, and can really milk a laugh). The Schitt’s Creek cast is always reliable for a chuckle. Stephen Colbert did an obvious, but relatively well-executed bit about the recall election in California (it just went on one joke too long). In fact, the only presenter who was painfully, ruthlessly, atrociously bad was Ken Jeong. I don’t know who wrote his bit, or why he decided to do it, but my God was it awful. At least we had Reggie Watts as DJ, which was an excellent decision that should be replicated at many awards shows to come. However, as entertaining as the presenters were, there was still a stilted sense of low-energy fun throughout that undermined the evening. This missing sense of joy is why Conan O’Brien was so essential – after losing for Best Variety Series in his last year on television, O’Brien apparently made the decision to derail the evening. He did some sort of bizarre, but hilarious bit during the Academy President’s speech that seemed to throw off the entire room (to the delight of those of us at home). And when Stephen Colbert won for Best Live Variety Special, O’Brien stormed the stage, accepting an Emmy alongside the rest of the writers’ staff. Conan’s actions were the best and worst part of the evening: far and away the funniest moments, but also underlining the structural problems in both the show’s writing and execution.

Well, that concludes this year’s Emmys coverage! Next year’s already shaping up to be a massive ordeal, with Ted Lasso likely to compete against previous winners like The Marvelous Mrs. Maisel, and 2020 juggernaut Succession returning to the Drama race. But until then, let’s take a look at this list of winners and remember what the Emmys are all about: helping us find great new TV shows to binge and enjoy. I’ll be spending my next few weeks luxuriating in those shows I’ve missed, like winners I May Destroy You and Hacks, or Halston and The Crown, or nominees that deserve more attention and notice, like The Underground Railroad. You can see the full list of winners below.