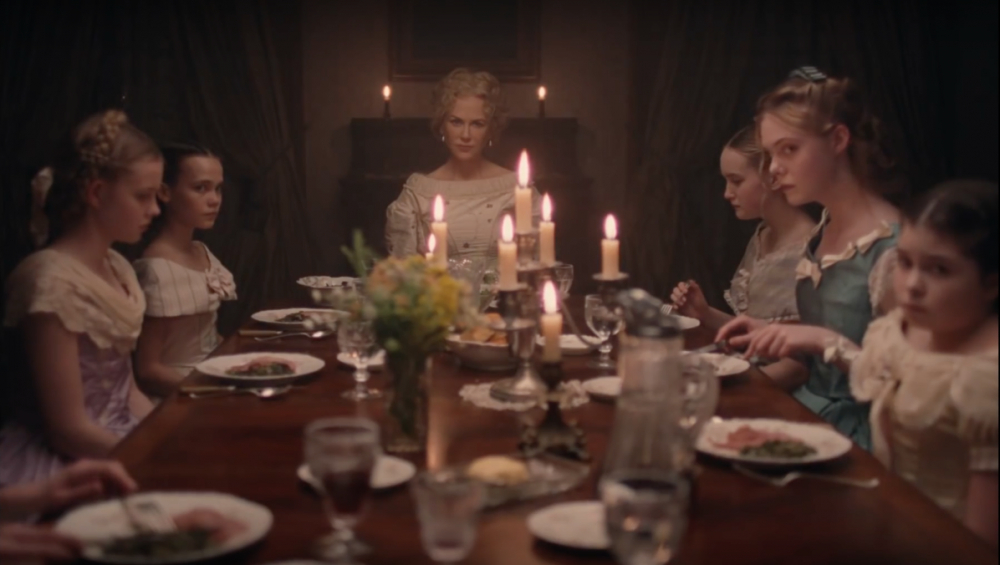 There are times when you have to make your worst film before you can recover with something great. Sofia Coppola’s The Bling Ring is one of the worst movies I’ve ever seen, but it allowed her to truly impress with The Beguiled, a “remake” of the crappy 1970s film of the same name. In fact, while Coppola hasn’t topped her masterpiece Lost in Translation, she has managed a film so brilliant, it actually allows her to explore the themes that she attempted to cover in Bling Ring and The Virgin Suicides, to varying results (I find the latter film an interesting experiment that doesn’t work overall), and flesh them out in a much smarter way. It’s a taut, sexy thriller, and one that everyone should take the time to see.

It is 1863, the height of the Civil War. Trapped with nowhere to go, the patrons of Miss Martha Farnsworth’s Seminary for Young Ladies, a Southern all-girls school, keep themselves locked inside the school’s gates, rarely traveling out unless they need supplies. One day, while out collecting mushrooms, young student Amy (Oona Laurence) discovers a gravely injured Union soldier named Corporal John McBurney (Colin Farrell). Unable to leave him to die, she brings him back to the school to be nursed back to health. Alone with a variety of women, ranging from teachers Martha Farnsworth (Nicole Kidman) and Edwina Morrow (Kirsten Dunst) to students Alicia (Elle Fanning) and Jane (Angourie Rice), John finds himself in the midst of sexual, political, and social tensions that will change the course of their lives forever.

One of the reasons I don’t think previous incarnations of this story work, be it the book or the movie, is because they’ve always been told from the point of view of McBurney. Told in such a way, it feels more like a “b*tches be crazy” than it does a social critique. Coppola has made it clear from the beginning of production that her goal was to tell this story from the women’s point of view, and it is clear almost from the very beginning that this is how this movie should be told. The women in this film are in no way the villains, nor should we consider them heroes. Instead, they are victims, forced into positions they don’t desire thanks to repression. This repression comes out them from all angles, and Coppola subtly demonstrates them to us in the quietest ways possible. Obviously the location of the South plays a major role in that, as the romanticized vision people have of the Confederacy often involves an aristocratic hierarchy, where women are required to cook, clean, sew, have perfect handwriting, and learn French – all traits necessary for the benefit of their future husbands. Little subliminal ideas are flashed to the viewers to drive this idea home, from the constant utterance of prayers to the stern nature of the teachers. These are themes that Coppola has explored before, in Marie Antoinette and especially The Virgin Suicides, which was pretty much exclusively about how repression in young people, especially young girls, can horrifically damage the psyche. However, they’ve never felt as alive as they have here, as if the audience can physically feel the entrapment and the tension that she is displaying.

One of the reasons you can feel this sense of suppression is because of the mise-en-scene that Coppola has put together. Every little choice she makes allows the viewer to feel as trapped and as stifled as the characters in this movie. From the constricting costumes to the burning production design (you can actually feel the heat permeating from the screen), Coppola constantly has you feeling the emotions that she is displaying. One key decision that she makes is her use of aspect ratio. I’m no expert on the numbers used in projecting film, but I can usually tell it when I see it. Coppola has chosen an intentionally stifling framing device here that constantly chokes the audience, raising the tension as you slowly feel more and more claustrophobic. What’s even more taunting, every frame of this movie is gorgeous, from the sunlit woods to the flash of moonlight across pale skin to the glistening, sweat-soaked body of Colin Farrell (more on that in a minute). This makes the cinematography both a visual treat and a suffocating nightmare at each turn. It’s honestly one of the best put-together movies I’ve seen in a long time, and I cannot praise her enough for it.

Perhaps this stifling atmosphere helps us understands why this movie is so sexy. Honestly, this movie is incredibly arousing, despite the fact there isn’t a single sequence of nudity and only one and a half sex scenes, both falling late in the film’s run. By creating an atmosphere where any hope for sexual release is lacking, the sight of anything arousing feels infinitely more so. This is especially the case in the portrayal of John McBurney. Hot damn, is Colin Farrell hot in this movie. There is a scene where Nicole Kidman gives Farrell a sponge bath, and it is the hottest scene in years, and I’m including this year’s Fifty Shades Darker. Quite frankly, it’s kind of refreshing that the exploitation of the human body in this movie is only used on the male body, both because we’ve seen the exploitation of the female body in thousands of films before this and because, well, Farrell is sex incarnate.

Now, before I continue any further, I want to address the controversy surrounding this film, something I so rarely do. It has become a point of contention amongst the angry throngs on Twitter that the character of Mattie, the school’s slave, has been cut from the picture (ironically, none of the people online who complain actually know the name of the character, implying their anger comes without any actual knowledge of the book or film). Coppola has defended this decision with the explanation that it would not be possible to create a respectful take on the character based on the story at hand. Having read the book and seen the original film, I must agree with Ms. Coppola. There is no way that the character of Mattie can be given the arc that she deserves or the critics want, based on how demeaning the character is written. To add her in would slow down and distort the taut thriller that Coppola has created. However, I’m not willing to let her completely off the hook, for this reason. To explain the absence of slaves in this film, young Amy explains to John McBurney in the very first scene that “The slaves left.” I must critique this addition for two reasons. First, it fails the very goal that Coppola had laid out in not including Mattie in the first place. It simplifies and sweeps away hundreds of years of history, in an attempt to avoid talking about something serious in a constructive way. Second, and more importantly, it’s just a lazy line. Honestly, out of all of the ways the film could address that aspect, this is arguably the worst. It would have been a much smarter, and much more respectful decision to cut that out completely. After all, not every Southern family owned slaves, and drawing attention to the fact you’re cutting them out of the story is a sure way to make you look bad. It might not seem like a large misstep, but it’s such a poor decision it easily knocks the film down a few pegs from the artistic achievement it could have been.

Looking back to the positives, I want to stress that this is one of the best ensembles in recent memory. Each cast member works off each other to further each other’s performances in the best possible way. In fact, by cutting the number of students from eight to four, Coppola has allowed the girls who don’t get as much to do, like Emma Howard and Addison Riecke, to stand out much more prominently, and show their talent as great child actresses. Angourie Rice is also great as the skeptical and biased Jane, blinded by loyalty to her country no matter what her emotions tell her. Kidman proves that she is on a hot streak, performing with a fiery passion and hidden heart that make it one of the most interesting performances of the year. Elle Fanning gives her best performance yet as the quintessential Coppola character. Coppola’s bread and butter are spoiled women forced to deal with situations they haven’t been allowed to fully understand. Similar characters can be found in Virgin Suicides, Marie Antoinette, and The Bling Ring, to varying results. Quite frankly, I think Fanning’s performance here is probably the best Coppola’s accomplished, let alone the best of her own rising career. However, the film’s three standouts are Farrell, Dunst, and Laurence. Farrell plays the object of sexual objectification with a fiery passion, milking each scene for all its worth, carefully balancing the question of whether he is the abuser or the abused. Meanwhile, Laurence continues to prove she is the best child actress in the business, after stealing last year’s Pete’s Dragon. Her Amy is adorable, lovable, and heartbreaking, and is one of the best-cast actresses in a film of many. However, this is Dunst’s film, through and through. Dunst has always been an underrated actress, and her best work comes when she works with her best friend and mentor, Coppola. Her performance as Ms. Edwina goes the full gamut, feeling trapped, romantic, heartbroken, and tough all at the same time. She is a fascinating character to watch, and I’m glad Dunst finally has a role worth of her talents.

Sofia Coppola has crafted a taut, sexy story the likes of which theater hasn’t seen since the 70s. She has done what we expect artists to do when adapting material – take the material and elevate it to a higher existence. It’s not an easy watch, but it’s smart, fun, and stands with the best of Coppola’s oeuvre, and that’s all we can ask for.