‘The Conjuring: The Devil Made Me Do It’ Review

HomeReviews‘The Conjuring: The Devil Made Me Do... 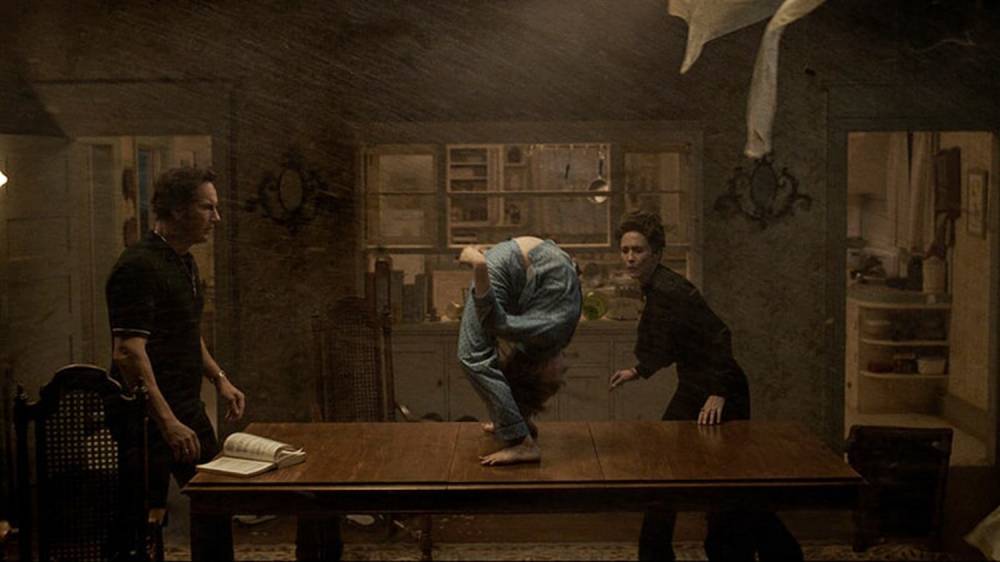 07/06/2021 Travis Burgess Michael Chaves, Patrick Wilson, Reviews, The Conjuring, The Conjuring: The Devil Made Me Do It, Vera Farming 0 Comments

I’ve made no secret around these parts that I believe The Conjuring is one of the finest films of the last decade. It is a solid horror film that not only delivers the scares – it demonstrates a true understanding of the craft of filmmaking as a whole, from executing the tension to raising stakes to performances. It’s sequel,The Conjuring 2, lacked the magic of its predecessor, but was still a fun way to spend a rainy afternoon – the definition of true entertainment. So you can imagine my disappointment that the third entry, The Conjuring: The Devil Made Me Do It, is such a dud. While the performances are still there, director Michael Chaves spends the entire film proving that he not only doesn’t understand what makes this series scary to begin with – he may not understand how to make a scary film, period.

In 1981, demonologists (ghost hunters, but with a Catholic angle) Ed (Patrick Wilson) and Lorraine Warren (Vera Farmiga) are called to assist on the exorcism of an 8-year-old boy named David Glatzel (Julian Hilliard). Things quickly go wrong, Ed has a massive heart attack, and through a long, convoluted series of events, the demon transfers itself into the body of Arne Johnson (Ruairi O’Connor), the boyfriend of David’s sister. Possessed by the violent demon, Arne brutally murders his landlord, Bruno Sauls (Ronnie Gene Blevins), leading to the first and only instance in American courts of pleading Not Guilty By Demonic Possession – a case later dubbed “The Devil Made Me Do It.” Determined to prove Arne’s innocence, Ed and Lorraine begin to investigate the demon, and soon discover a horrific conspiracy involving and occultist (Eugenie Bondurant), a series of demon-inspired murders, and a battle for the soul of an “innocent” man.

The greatest flaw with The Devil Made Me Do It is it just isn’t scary. The Conjuring movies work because they were self-contained ghost stories. The films would take place in one or two locations, forcing us to understand the layout of the land, and amping tension when we know someone – or something – is out of place. Not only does The Devil Made Me Do It eschew the ghost formula, it eschews almost everything that made these movies great. Now Ed and Lorraine are hunting ghosts all across the state of Connecticut, creating too wide a platform to work with and inadvertently ramping down the tension. Meanwhile, the “scares” at the heart of the film are significantly diminished by a focus on the “jump scare” as opposed to the tension. What always made the first Conjuring so great was its slow build-up to the reveal – casually showing us all the children were in bed as clapping echoes through the house. There’s no slow-build here. Now the demons jump out from behind doors and from under beds – and I’m sorry, no matter how hard you try, I’m never going to find a waterbed to be scary. It’s a bit disappointing – ghost stories are so simple to get right, and yet a desire to be “bigger” and “better” has resulted in CGI bodies getting distorted simply to gross out audiences. Unlike the first film, which was pure, unadulterated horror, or the second one, which created a unique villain in Valak, there’s nothing for audiences to truly be scared of; the focus is too scattershot.

Of course, it doesn’t help that Michael Chaves spends the entire film creating a “greatest hits” feel. And I don’t just mean from the series itself, although he does mimic iconic moments like the original’s opening tracking shot for no discernible reason. I mean he’s constantly creating homages to older, better horror films, often for no other reason than, “Hey, remember this?” You’ll notice the film’s blatant attempts at homage from the opening minutes, when the exorcism of David Glatzel opens with…a priest dropped off by a taxi in the fog underneath a streetlight. Never mind that this setup makes no sense in this location or setup. Just gotta make that reference so the rubes in the audience declare “I ‘MEMBER DIS!” Similar references are made to Blair Witch Project, Don’t Look Now, and, weirdly, The Texas Chainsaw Massacre – which is especially weird, because it has nothing to do with the story, and the chainsaw is never used as a weapon in any sense of the word. Perhaps these homages to other, scarier films are meant to distract us from the fact that the film has nothing particularly scary to show us. Human villains are inherently less scary – they can be killed, unlike ghosts and demons, and the fact that the film now resorts to psychic battles where witches can send zombie assassins doesn’t change that. In fact, the only two actual scares in the film come not from jumps or passing references to older material – they come in the form of original sequences of good old-fashioned tension, like a POV shot from a demon silently watching Arne, or the gradual amp-up to the violent act. Knowing something terrible is coming and feeling powerless to stop it is far more interesting than a monster jumping out and shouting “Boogidy Boogidy Boogidy!”

However, if I had to pick the film’s greatest misstep, it’s assuming that audiences are tuning in not for a well-constructed ghost story, but because they care about the emotional journey of Ed and Lorraine Warren. This film vastly misjudges how much faith we have in the Warrens and their ghostbusting. In the past, this wasn’t a huge deal – they’d mostly show up in the third act to try to exorcise the demons and save the day. Now, they’re the entire film. And not only that – they are portrayed as superheroes every step of the way. Ed is so cool he’s able to outrank the priest during the exorcism. Lorraine has actual superpowers, her psychic abilities elevated from subtly showing hanging bodies only she can see to now wandering around CGI ghost worlds and fighting zombies. And they have a love so pure, they only speak in dialogue so cloying you can often finish it for them. But here’s the kicker: not only are these characters far less interesting than the film believes, but focusing on them to this degree in this context also makes the film’s context far grosser than its predecessors.

The Warrens are, without question, charlatans. Their entire schtick was using Catholic jargon to trick believes into assuming ghosts possessed their houses in order to scam money out of the Catholic Church. Telling their story wasn’t a huge moral issue when there were no real stakes. Your mileage varies based on your belief (or susceptibility) to the supernatural. They simply told simple stories, and nobody got hurt. But this isn’t a simple haunted house story where no one was seriously hurt: someone died. A real person. And while there’s evidence to suggest that the Johnson operated in self-defense, the film is still propping up a story propagated by hucksters in an attempt to help the murderer avoid his Catholic guilt. This is not a story about some harmless ghost hunting; there are actual stakes in how this story is told, and it’s morally gross to see the film try to milk that for pulpy entertainment.

Now, ironically, the film’s greatest strength are the performances, particularly by Farmiga and Wilson. These two have incredible chemistry, and they are able to sell us on whatever evils they confront – whether that’s metaphorical, like death, or literal, like ghosts and witches. Wilson is always admirable in these films, but I really want to single out Farmiga, who is especially charming, funny, scared, and convincing in every frame of this silly, silly film. I also want to shout out Ruairi O’Connor, who plays the film oppressively naïve, yet sells it with his “aw shucks” honesty. It makes his turn towards murderer that much more frightening and convincing. Amongst the side characters, Sarah Hook plays the innocent farm girl Arne is in love with effectively, as does Ronnie Gene Blevins as the boozy, handsy landlord Bruno Sauls. Julian Hilliard is appropriately terrified as the possessed child David Glatzel. And Keith Arthur Bolden gives a fun performance as Sergeant Clay, with whom the Warrens have a brief encounter. He fully understands what type of film this is supposed to be. But as solid as these performances are, there are a few roles I want to single out as…less than stellar. John Noble plays a creepy former priest, and while the character itself is rather interesting, Noble brings nothing interesting to the role. Meanwhile, Eugenie Bondurant is overtly over-the-top and obnoxious every time she’s onscreen as the evil witch causing all the commotion. And while they only have approximately two minutes onscreen, Andrea Andrade and Ingrid Bisu give two of the worst performances I’ve seen in a horror film in a long time. They cannot act to save their lives, and their brief scene is the writing on the wall for this dud of a film.

By its end, The Conjuring: The Devil Made Me Do It makes it abundantly clear why this film doesn’t work. As all the Conjuring movies do, Chaves closes the film with real-life tapes of the events that inspired the film. And the tapes of David Glatzel’s exorcism are so much more frightening than anything on display in the film itself. This is a film that has lost its way, choosing CGI and absurdly raised stakes over intimate, inescapable horror. And while the actors do their best to make us feel the tension, the icky premise and lack of follow through keep this film from being the scariest film I’ve seen this month, let alone a worthy entry in a series of solid horror flicks.

The Conjuring: The Devil Made Me Do It is now playing in theaters