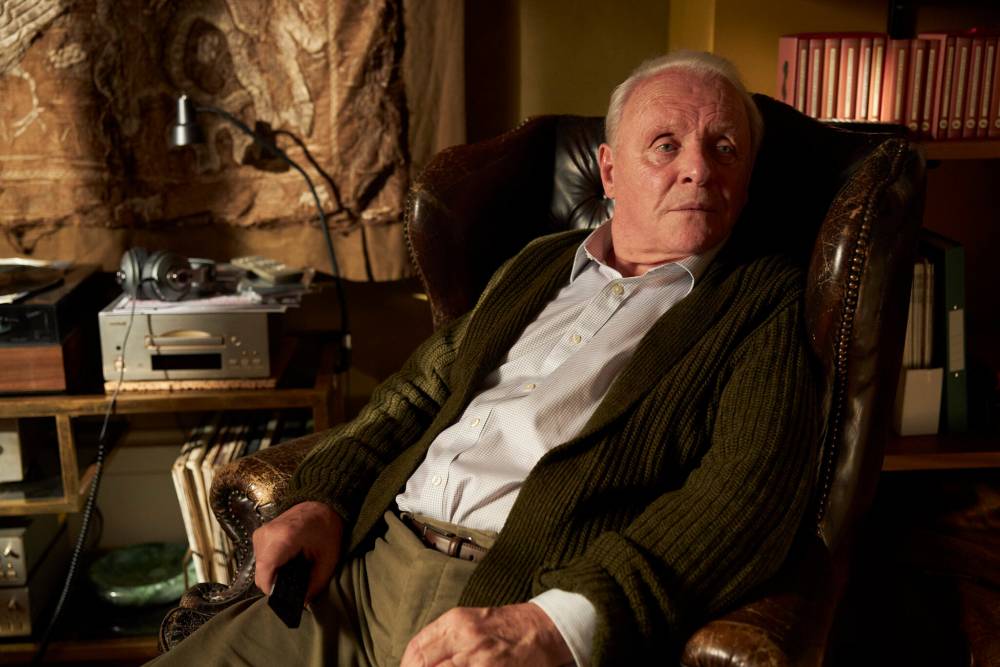 I’m having a hard time exactly categorizing The Father. It is a masterful achievement, and yet a film I never necessarily want to watch again. It is a testament to great acting and editing while simultaneously feeling overbearingly staged. It is quite similar to the 1966 classic Who’s Afraid of Virginia Woolf?, a film that wears its theatrical roots on its sleeve and lets the actors and the script interact. And while Florian Zeller’s adaptation of his smash hit play is not quite the classic Mike Nichols’ film was, it still is a dazzling, empathetic, and cathartic piece of storytelling that cannot be overlooked.

Anthony (Anthony Hopkins) is frustrated at his lot in life. His daughter Anne (Olivia Colman) thinks he’s no longer able to take care of himself, and if he doesn’t accept help in the form of a nurse (Imogen Poots), then he’ll have to give up his beloved flat. So Anthony’s been a bit forgetful lately, who isn’t? He’s still able to take care of himself. But hold on – who’s this strange man living in his apartment now (Mark Gatiss). Isn’t Anne married to Paul (Rufus Sewell)? And why is the furniture all moved around? And who is this strange woman in the apartment (Olivia Williams) claiming to be Anne? Thus begins a strange, disorienting, and painful journey inside the mind of a man with dementia, as Anthony slowly realizes his best days are behind him.

There’s no other way to describe the technical design of this film than dazzling. Zeller has crafted one of the best fictional depictions of dementia I’ve seen on film. While most films of the sort focus solely on the “woe is me” aspect of the disease from an outsider’s belittling perspective, like the unbearable 2014 film Still Alice (Julianne Moore needs to give Rosamund Pike that Oscar IMMEDIATELY), The Father puts us squarely in the mind of someone actually suffering the disease, allowing viewers to better access their empathy receptors. What’s truly impressive is the way that Zeller makes this an immersive experience all around. He allows every aspect of the filmmaking, from the script to the score to the editing, to blur together in a disorienting collection of repeating, confusing scenes. It makes for a painful, yet riveting experience. I’ve always been a huge proponent of dramatic irony in film, where audiences know something that the character onscreen doesn’t; and yet even if you know that the twist of this movie is that Anthony has dementia, the film manages to defy expectations by undercutting the dramatic irony at every turn. Actors trade off line readings so quickly and so effortlessly, and things repeat and appear out of order so fluidly, that there’s no way you can properly keep up, the same way Anthony finds he can no longer keep up. Editor Yorgos Lamprinos deserves a huge pat on the back for this – the way he creates a trippy, repetitive, and yet oddly coherent story that makes the viewer question what’s happening, what’s a memory and what’s happening in real time, and beyond is really rather astonishing. I also want to commend production designer Peter Francis, whose constantly changing set equally adds to the film’s dizzying distortion of reality. The film really captures the painful existence of someone losing the one thing they can rely on, and makes the aging experience the harrowing ordeal it so often is.

I do, however, need to point out that as a first-time director of the screen, Zeller’s greenness often shines through, occasionally to the film’s detriment. One of the weakest aspects of films based on plays – especially in the mundane, churning nature of modern cinema, is that there’s no kinetic energy. Even films I like, from Fences and Ma Rainey’s Black Bottom to The Sunset Limited and Carnage, so often feel like someone put a camera in the corner of a theater and just told actors to say the lines, without creating a size or scope of the real world. It undercuts the humanity of the material and reduces it to nothing more than text and a few flashy tricks by trained performers. What makes the great adaptations so great is that, whether there’s a reverence for the material or not, the director makes bold choices that make the action feel lived-in, even if the story itself is highly staged – like Amadeus, or A Streetcar Named Desire, or Glengarry Glen Ross, or even The King’s Speech. All of these films combined the electric dialogue and acting from the stage within a riveting, engaging story that reflects the real world. Too often Zeller lets his actors recite their lines as if rehearsing, undercutting the realism and naturality that cinema can provide. In fact, Zeller is so reliant on the words and actors, he really only takes one major swing, in the form of a morbid dream sequence that not only doesn’t work, but is then inherently repeated time and time again. While I understand Zeller’s desire to adapt his own story, I can’t help but wonder how the film would have looked in the hands of a more honed filmmaker – a Barry Jenkins, or a Steven Soderbergh. When coupled with the fact that the film’s second half – shortly after the audience has managed to piece together what exactly is going on – begins to lose steam and wane interest, it pokes a few holes in what could have otherwise been a taut, mesmerizing experience across the board.

Still, I can’t be too mad at Zeller as a director – he did manage to get this performance out of Anthony Hopkins. Hopkins has always been a terrific actor, from drama (Howards End) to comedy (The Two Popes…kinda) to horror (his iconic Hannibal Lector in Silence of the Lambs), but it’s still amazing how deeply he can invest himself into a performance, especially at 83 years old. It’s a performance you can feel on a gut level, especially if you’ve ever had a father or grandfather start to lose their memory – and a part of themselves – near the end. What’s painful is that while we certainly can see and feel that loss through the other performers’ eyes, Hopkins never lets on – he plays Anthony the way Anthony sees himself, still full of life and vigor. Even in sequences where it feels like he and his scene partner are just exchanging lines, Hopkins provides a life to his quips and outbursts and opinions, creating the illusion of a relatable, lovable old man to whom we don’t want to see anything bad happen. It’s why we’re willing to believe his charismatic attempts to hide his mania, and it’s why when he cries in this movie, and lets his full 83 years of life fully show, it’s the most devastating imagery you’ll see all year. One sequence is so painful and so heartbreaking I almost had to stop my screener. This is a monumental performance worthy of praise, and a wonderful endcap to a dazzling career, should Hopkins choose to retire right now.

As for his scene partners, Hopkins is matched by some talented performers. The casting of two actresses named Olivia to play Anne is certainly a clever concept on a technical level, but it’s a bit unfair to Williams, who is adequate in the role. Not only does she have to compete with Olivia Colman, one of the finest actresses of her generation hot off of two (going on three) Emmy nominations and an Oscar win, but Colman gets the meat of the material, playing Anne at her most emotionally vulnerable. Colman goes hard against type as a woman who wants to help her father, and yet can see that she is losing him, and there is a pain, honesty, and charm that shines through, even if I personally prefer her playing inappropriate police officers, passive aggressive godmothers, or mentally deranged queens. Rufus Sewell’s Paul is perfectly fine, if unmemorable, while Mark Gatiss is perfectly slimy and hateable as Bill. Of course, if there’s one breakout here outside of Hopkins and Colman, it’d have to be Imogen Poots. I’ve never really been fond of Poots as an actress, but the work she’s done in recent years, from Green Room to Black Christmas to here has really impressed me. She’s quite good as nurse/caregiver Laura, the only person who manages to get through to Anthony, and who may possess a striking resemblance to someone from his past (or maybe not). I was always happy to see her show up in the film, and she rounds out a solid ensemble mostly dominated by two figures.

The Father is an astonishing feat of acting helped by strong editing. Do I wish that Zeller’s direction was a little bit stronger, and his devotion to the script a little weaker? For sure. Would I take Dick Johnson Is Dead as a portrayal of dementia over this film any day of the week? Also yes (reminder: Dick Johnson Is Dead is the best film of 2020). But The Father dares to try something not really done before on film: to fully immerse the viewer in the mind of a struggling, lonely old man as he loses not only his memory, but his entire personality. It’s smart, and human, and heartbreaking all at the same time. Even if it’s not perfect, it perfectly encapsulates that “empathy machine” Roger Ebert so often talked about. And I remain forever impressed and moved by the final result.

The Father is currently showing in theaters – if, of course, you are vaccinated and able to do so. Otherwise, it will be available to rent on March 26th