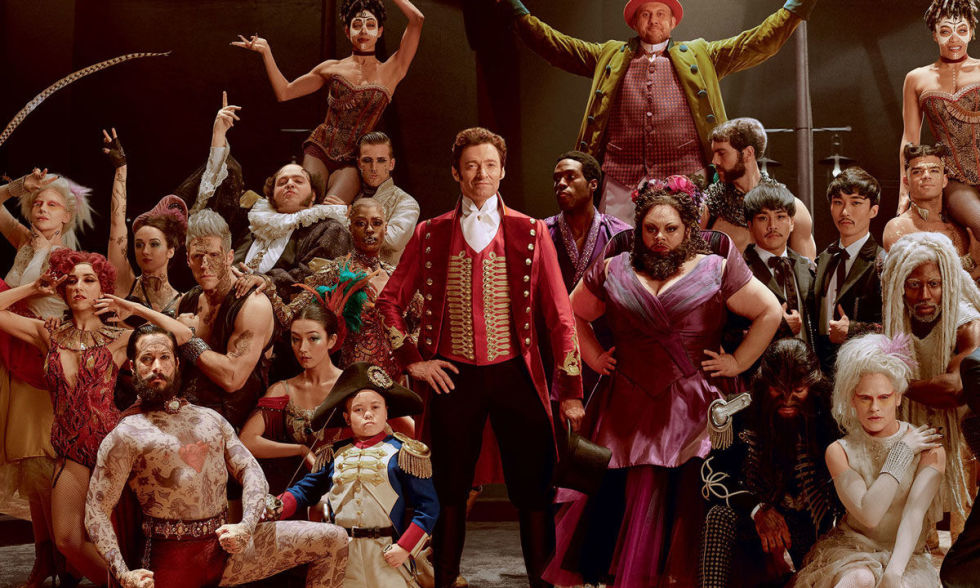 This is a Venn Diagram about films. On your left are movies I like. On your right are movies that feature a man riding an elephant through the streets of New York to make it to his daughters’ ballet recital on time. In the middle, inexplicably, is The Greatest Showman. Hugh Jackman’s long-awaited and long-joked about passion project, an original big screen musical about the life of P.T. Barnum and his famous circus, is indeed that – it’s big, it’s lavish, it’s ridiculous, and at many times, it’s dumb. And yet – and yet – it somehow completely works, filling you with the indescribable joy that going to the circus allegedly fills you with (the kind you read about in books, not the one where you go and see a bunch of sad animals and clowns trying to murder you).

Some time during the mid-1800s, P.T. Barnum (Hugh Jackman) is at the end of his rope. While he managed to raise himself out of poverty through his own ingenuity and marry the wealthy daughter of his father’s employer, Charity (Michelle Williams), and he has two beautiful daughters, he wants more out of life. Using his massive imagination and his penchant for lying, he creates a massive sideshow dedicated to the unique talents and abilities of societal outcasts – including Lettie Lutz the Beareded Lady (Keala Settle), the young dwarf Charles Stratton (Sam Humphrey), and W.D. and Anne Wheeler, two African-American acrobats (Yahya Abdul-Mateen II and Zendaya). While scorned by the elites (and a large group of prudes) and the critics, Barnum uses the aid of playwright Phillip Carlyle (Zac Efron) to turn his little spectacle into the greatest show on Earth.

I want to establish something off the bat: history has a lot of mixed things to say about P.T. Barnum. The problem is that, unlike a beloved figure like Abraham Lincoln or a loathed figure like Christopher Columbus, there is no definitive evidence either way. In fact, almost all stories about his kindness (that he was a leading abolitionist) or his cruelty (that he was a slave owner) have been mostly or completely been debunked, leaving his fate with a major question mark. I say all this because it gives the film a little leeway in terms of the liberties it takes with Barnum’s life. While it feels irresponsible and offensive to make films glamourizing terrible men, or fictionalizing the life of a good one, The Greatest Showman benefits from the lack of true evidence about Barnum’s life. Furthermore, in doing so, it provides the added advantage of heeding the real Barnum’s own personal creed: if you’re providing your audience a strong moral (here, it’s accepting others for their differences) and you deliver a true spectacle, who cares if it’s all fake?

So now that I’ve gotten that off my chest, let’s address something new: this film’s ridiculousness. This film has the intellectual and emotional depth of a Hallmark movie. It is very much filled with bad decisions and ridiculous iconography. As mentioned above, this movie features the dramatic rush of the workaholic to his daughter’s performance, except here he rides an elephant. The dialogue is incredibly on-the-nose (although, mercifully, the editors heard our complaints about that god-awful line about “show business” from the trailers and cut it from the film), resulting in a perfectly good film about tolerance and acceptance ending with a dramatic speech about tolerance and acceptance. When will writers realize that audiences can pick up on themes from the visuals? It’s why film is a visual medium! And there are several subplots that don’t lead anywhere. There’s a sequence involving Queen Victoria (Gayle Rankin) that is so ridiculously unrealistic and so completely misses the tone of the film that I almost walked out during it, and a subplot involving opera singer Jenny Lind (Rebecca Ferguson) which paints her as a man-stealing witch ultimately makes no sense. Oh, and speaking of Lind, her big operatic aria is, inexplicably, a modern day pop ballad, because reasons. All of this adds up to make a weird hodgepodge of a movie.

However, in spite of all this, you can’t help but just love this movie. From the opening musical number, there’s something electrifying in its dazzling performance. There’s a reason we loved – and still love – old-timey musicals, and it’s because seeing a spectacle come together just warms our hearts. These sequences are fun, they’re exciting, and they make us want to stand and cheer. The editing is quick and snappy throughout “The Greatest Show” (which also plays over the studio credit montage in a way I’ve never seen before, immediately drawing us in for the ride), the dancing and timing is perfect on Jackman and Efron’s “The Other Side,” and there’s a real spine-tingling sense of excitement during “Come Alive.” And when actual Broadway veteran sings “This Is Me,” a song about the Other in society standing strong in the face of those who despise and curse them, and we get the visual of the misfits banding together for the chorus, it may as well be the best sequence of the year thanks to its filmmaking and positivity. I think the reason the film works so well can be summed up with this revelation: Hugh Jackman’s last films have been Logan and Les Misérables, where he very rarely smiles. Michelle Williams has been depressed in damn near every movie she’s ever been in. From their very first scene in this film, the two of them are smiling, singing, and enjoying life. That’s why this film works: because for once in their freaking lives, these people we like are having fun. Everyone is having fun. This movie is fun. And it sucks us in for the ride.

In terms of performances, everyone does their job adequately. Jackman is having the time of his life showboating, dancing and singing for our entertainment, and even if his acting is more “fine” than “good,” we’re willing to let it slide. Meanwhile, Michelle Williams looks like she’s trying to relax after crushing our souls in Manchester By The Sea, and while she isn’t the strongest singer, and her character has very little to do other than nod approvingly at Jackman, she still manages to hold her own and make us feel happy whenever she’s onstage. Meanwhile, Zac Efron seems to be having a blast he can return to his roots as the moderately talented, incredibly handsome singer-dancer-actor he was in High School Musical. His character is kind of worthless, but who cares? I want Efron and Jackman to perform drinking songs for all of eternity. And if it means I get to enjoy his blossoming (albeit unrealistic for the time period) relationship with Zendaya, I’m all for it. I heavily disliked Ferguson’s sequences in the film, and she didn’t even sing for herself, but she’s always been, and always will be, a talented actress. And Austyn Johnson and Cameron Seely just warm your damn hearts as Barnum’s appropriately cute daughters. As for the “freaks,” the ensemble is pretty strong. Sam Humphery, Yahya Abdul-Mateen II, Daniel Everidge, and Luciano Acuna, Jr. are all memorable participants in Barnum’s sideshow, and they successfully manage to win over your affections, but if this film has a secret weapon, it’s Settle. A Tony nominee who is best known as one of Broadway’s best Madame Thenardier, Settle is emotionally powerful and naturally gifted in her performance. She plays Lettie as a nervous, self-conscious woman who learns to let loose and ultimately accept herself through her unique gifts. There’s a reason that “This Is Me” is the film’s runaway hit, and it’s her incredible voice. She’s an actress who deserves to be a star of both stage and screen, and I suspect that this film will help her achieve that dream.

Look, I’m not going to stand here and pretend that this is an out-and-out “good” movie. It’s cheesy, it’s over-the-top, it’s ridiculous, and it’s everything people who hate musicals expect musicals to be. However, there’s just some sort of wholesome, good-old fashioned fun that comes out of this film that you can’t ignore it – it’s infectious. This is a gorgeous, lavish, campy production scored with memorably fun songs and possessing a strong message about accepting others. And above all, it’s fun, something we are all in desperate need of. I guess what I’m trying to say at the end of the day is that I liked this film. I can’t explain why, I can’t explain how, I’m even a little embarrassed by it. But I like it, and I will stand tall and announce that for the world to hear.