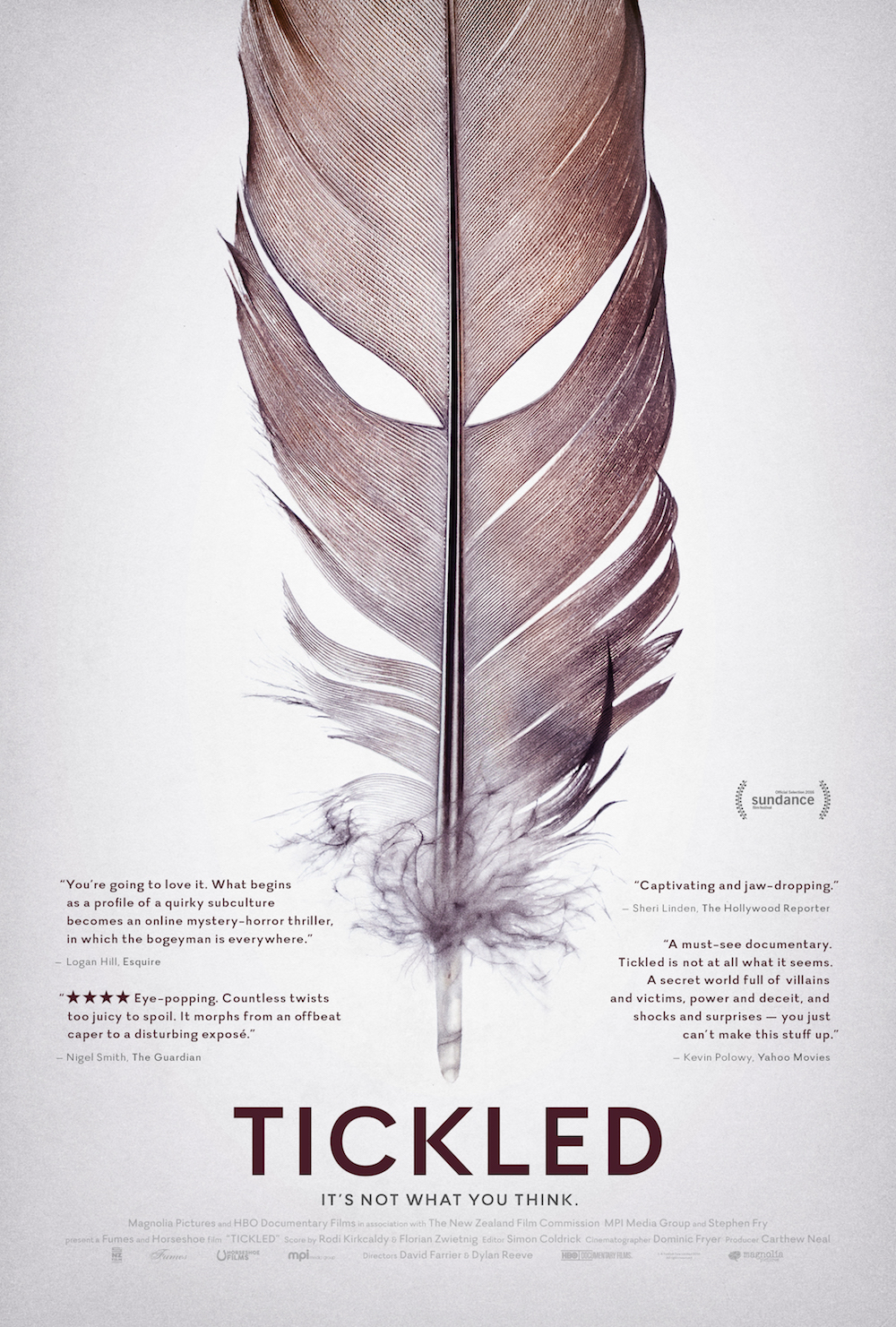 There are two main types of documentaries: idea-driven ones and character-driven ones. An idea-driven documentary takes some larger idea and explores it, trying to figure out the cause, and why it is so great/problematic. This would be your Inside Man or The Cove-type documentary. A character-driven documentary focuses on a specific person and their influence on the world. This would be O.J.: Made In America or Amy. However, documentaries become special when they blur the lines, finding the golden area where these two types embrace, usually by accident. What normally happens is the crew sets out to make a documentary focused on one of these subjects, only to discover as they go that it is the other, and that’s where the magic happens. The most recent example of this is 2013’s The Act of Killing, where the major ideas of the Indonesian genocide are boiled down into the retribution of one mass murderer’s conscience. It is this type of magical realization that makes Tickled such a rare and unique documentary experience.

The less you know about this film, the better off you are, as understanding where this journey is headed is to lose some of the magic. However, this is what I can tell you. The project follows David Farrier, a pop culture journalist from New Zealand who specializes in weird and fun stories. A few years ago, Farrier found out about Competitive Tickling Competitions online, and finds a company, Jane O’Brien Media, that pays young men to come participate in challenges. He sent an email to them about a potential story, and instead received an email threatening him with lawsuits and retaliation for his “f*ggot lifestyle” (Farrier is openly gay in New Zealand). He chose to post the story anyway, and when he received letters from law firms in New York, he chose to make a documentary looking into what was going on. What followed is one of the most bizarre, twisted and terrifying true stories to be captured on film.

Farrier isn’t necessarily the best interviewer or reporter I’ve seen in a documentary. Indeed, I feel like he’d be more obnoxious if New Zealanders didn’t give off an automatically pleasant vibe. However, what he does possess is a curiosity that pushes him further down the rabbit hole, as well as a sense of righteousness that inspires him to defend not just himself, but the thousands of victims he uncovers in a mass conspiracy.

It obviously goes without saying that the only thing that can really propel a documentary forward is its topic. But here, that really is the case. The interviewers and interviewees are trivial compared to the vastness of what Farrier is uncovering. What starts as a Facebook post about tickling videos becomes a tapestry of lies, threats, class divide and power, spanning twenty years and two continents, as David’s journey takes him from New Zealand to Los Angeles, Michigan and New York.

The downside to this technique, however, is the execution. Since the interviews are merely footnotes to a much larger story, much of the cinematography is just establishing shots for the many cities around the world the crew visits. There’s nothing wrong with establishing shots-they can be vital to helping the viewer understand just what kind of world they’ve entered into. But when your film is only establishing shots, then you’re establishing nothing, and the entire point becomes moot. This is a weakness on the part of Farrier and his co-director, Dylan Reeve. However, when the subject is this bizarre, this surreal, and this terrifying, it is easy to distract yourself from problematic aesthetic choices.

On paper, this sounds a lot like Catfish, with a man trying to uncover weird happenings involving Internet acquaintances; but while that may be how the film starts, the end of the film flips that script and reveals itself to be The Jinx-the uncovering of a vast criminal conspiracy spanning several decades. Honestly, if I wasn’t seeing the evidence playing out before my eyes, I’m not sure I would have believed it.

I’m going to once again urge you not to Google this film, because it is now starting to seep into the news that those in charge of Jane O’Brien Media are showing up at press junkets for the film to threaten the director in person, and I would hate for you to lose the shock that I had experiencing this film fresh.

In the end, I guess you can boil the question down to, “Do I want to see a documentary about a tickling fetish?” And that question isn’t necessarily wrong. You have every right to write off this film based on that description. However, it is also misleading. The real question you should ask yourself is, “Do I want to see a tale of deception, abuse of power, class warfare and Internet abuse playing out across a backdrop of tickle fetishes?” And if you want to stare across the brink into the face of evil, then you should answer yes.