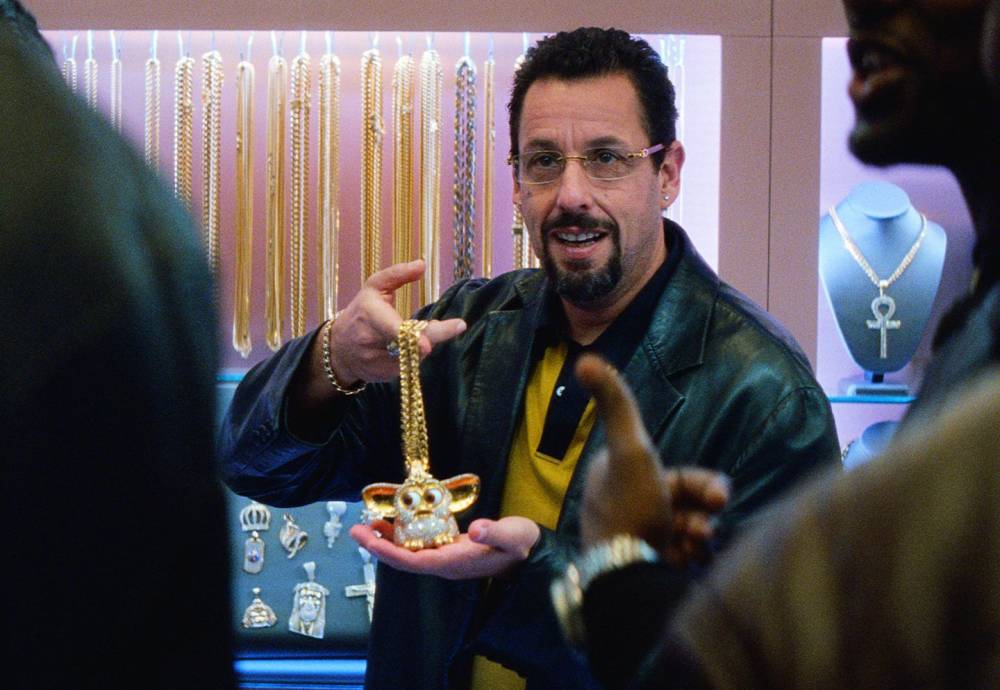 In an era where IP and cookie-cutter formulas are becoming ever-more present, it’s always refreshing to see someone with as clear a vision as Benny and Josh Safdie. While their previous films (Good Time in particular) have been relatively cold for me, I respect their command of filmmaking, as their films seem to combine the radical briskness of today’s independent film scene with the intimate realness of the 70s masters. And while I’m still not convinced I’ll ever love one of their films, it’s hard not to be dazzled by the impressive, infuriating accomplishment that is their newest feature, Uncut Gems.

Howard Ratner (Adam Sandler) has reached the most important week of his life. A Jewish diamond dealer in New York City, Howard is deeply in debt thanks to his reckless, uncontrollable gambling addiction. If he can’t pay back $100,000 to local loan shark Arno (Eric Bogosian) before the end of the week, there’ll be hell to pay. And that’s not to mention his home life, where he struggles to shield his kids from his impending divorce from wife Dinah (Idina Menzel) over his affair with mistress/employee Julia (Julia Fox). However, when Howard gets his hands on a rare black opal from Africa, scheduled for auction the same day he needs to pay back Arno, his life may begin to change. That is, if Kevin Garnett (playing himself), who believes the opal has magic powers to make him a better basketball player, doesn’t steal it first – although that would give Howard a leg up on his bets…

Uncut Gems is a fascinating study in the ticking clock genre. There’s a fine legacy of filmmakers setting up an in-universe deadline, throwing in obstacles to hold up the protagonists, and then see if they can make it before time runs out. It’s a concept they’ve worked with before, in 2017’s Good Time. However, as opposed to Good Time’s manic, breathless pace, Uncut Gems acts as the opposite of this type of story, almost to the point of parody. Uncut Gems features characters that are aware of the clock, and are either naïve or possess a complete disregard for the entire notion of the ticking clock. Howard is so naïve about the danger he’s put himself in and the terrible choices he’s made, he never seems aware of the long-term ramifications of his actions. He’s willing to give away his prized possessions in the hopes of short term gratification, even if in the long term it will leave him further in the hole. He asks his relatives to drive up an auction to fix the prices, not thinking of what may happen if everyone drops out at the same time. And he’s ok confronting gangsters in the middle of his daughter’s school play, not thinking of what may happen if he does so. The only time he does care about his infuriating decisions, the power is out of his control. He has to depend on unreliable employees (Lakeith Stanfield’s Demany), slow-moving relatives (Menzel), star athletes (Garnett), and the will of the universe. Each character moves at their own pace, whether or not it benefits Howard, and it serves to push the audience to their tension breaking point. All the way throughout, the Safdies utilize the complete disregard of this clock to not only play with tension, but to mine the material for comedic release. While the average viewer may be horrified when Howard turns around and gambles with what little earnings he has, thus risking his only chance at salvation yet again, it is hard to have any response other than a shocked, slightly amused laugh. It is masterful filmmaking, and I cannot imagine anything harder than keeping a film tense when the entire point is to ignore the tension.

Beyond just a study in the ticking clock, Uncut Gems is also a brilliant study in the mind of an addict. More specifically, in the mind of a gambling addict. While the ticking clock is the narrative of Uncut Gems, Howard’s gambling addiction is the thrust of the narrative. Each decision Howard makes in the film serves as an example of his addiction to both gambling and winning. His affair, his basketball bets, his purchases and appraisals – every aspect of his life is controlled by his addiction, to increasingly absurd and terrifying degrees. Howard is somehow both incredibly transparent and difficult to read – wearing his thoughts on his sleeve while remaining an enigma in his emotions and choices. In their infinite wisdom, the Safdie Brothers provide two lines that serves both as a Rosetta Stone for Howard’s character and as a thesis statement for the film as a whole. The first comes in the middle of Sandler’s terrific monologue, in which he asks a baffled Garnett why he continues to run the score up when he’s winning by 27. “This is how I win,” he summarizes. Howard likes to win, and win big, and while he’s not very good at basketball, or marriage, or almost any other aspect of his life, he finds his high through winning – whether by scoring a major deal, winning an insane bet, or engaging in an affair with a vivacious twenty-something. The second comes near the end of the film, in an almost aside. During a post-game interview, Kevin Garnett tells the reporter, “Winning is better than anything else.” It comes at an ironic moment in the film, but it’s message is clear: Howard gets his high by wagering everything, up to and including his life. It’s why he has no interest in the ticking clock – the thrill of cutting it close, nearly getting thrown out a window, getting chased around town by goons, and sneaking about with his girlfriend is his driving force. The greatest high is wagering his life, and hoping the gamble pays off. It’s a fascinating character study, and the Safdies and Sandler carry it perfectly.

And speaking of the Safdies’ skills I want to praise their filmmaking, because it is truly second to none. In the style of the 70s auteurs like Martin Scorsese (a producer on this film), Sidney Lumet, and John Schlesinger, the Benny and Josh know how to move the camera and cut the scene in the best possible way to transform the text into a living, breathing document. Benny’s editing, alongside cowriter Ronald Bronstein, is sharp and precise, moving the film along at a breakneck pace that never feels too fast or too slow. Is it shocking at the hour mark that the film isn’t over yet? Sure, but if the journey is as entertaining as the second half of this film, then who cares? Similarly, the cinematography by Darius Khondji sweeps and pushes throughout every scene, capturing the streets of New York with the same vision that Scorsese and Lumet once did during New York’s heyday. If you need any further proof that Joker was a cheap knockoff of better films, look at the sharp contrast between a film that clearly knows the streets of NYC and a film that watched half a Scorsese film and said “Yeah, I’m that good too!” And in their most fanciful, and brilliant, of choices, they add in a metaphorical (or is it?) series of sequences where the gem holds the history of the entire universe, and shows the beholder their own legacy – including glimpses as childhood Kevin Garnett in a series of quick cuts and sweeping visuals. I’ll leave the metaphor to the intellectuals to figure out – for now, I’m content just dazzling in the visual and assuming it’s like Llewyn Davis’ cat – a metaphor for a metaphor. From head to toe, this is a masterful piece of direction.

In what is becoming a repeated refrain this year, this is one of the better ensembles you will see in a long time. A veritable who’s who in New York, Jewish, and African-American character actors, the Safdies fill this film with interesting faces that feel like they could have been pulled off the streets of New York City, even if you know some of them are major stars. It says a lot about the film that Sandler gives perhaps the worst performance of the lot – and that’s not saying Sandler is bad. He is, in fact, quite excellent in the film, adding a layer of irritating paranoia to every scene as his usual tics are used to both seduce and infuriate those around him. However…it’s hard not to see this role as “an Adam Sandler type,” if you were to implant, say, Billy Madison into a drama-thriller. He works because the role requires his tics. The performances I’ve walked away remembering are the ones that developed new, exciting characters that I want to curl up and study for hours on end. The best performance in the film, far and away, is Julia Fox as Howard’s mistress Julia. Fox dominates every scene she’s in, and permeates the film whenever she’s not onscreen. She’s a vivacious, lovely, sexy, forceful presence, and if this film doesn’t make her a massive superstar, then we have failed as a society. I’m also in love with Eric Bogosian as Arno, which is so the opposite of his Bernie Sanders impression on Succession, and I absolutely adore it. He’s an emotional, respectable presence that commands every second he’s onscreen.

The rest of the cast is a veritable who’s who of talented character actors. Lakeith Stanfield shows up to do his usual shtick, and it’s always a delight. Idina Menzel is truly phenomenal as Dinah Ratner, reveling in the chance to play a non-Disney princess. Her utter disdain for her husband is palpable in every scene, and in the film’s most subtle moment, she shares a look with her daughter (Noa Fisher, a delight) that is one of the most honest and real looks I’ve ever seen on film. Judd Hirsch is outstanding as Howard’s father-in-law, while Keith Williams Richards is menacing as bodyguard/goon Phil. But if the film is stolen by anyone, it is by a series of three cameos that you will leave the film thinking about. The first is a horny, perpetually high cameo by singer The Weeknd, playing a younger version of himself. The second is by Wayne Diamond, playing a sleazy nightclub singer version of himself who continuously hits on Julia at the casino. And finally, there’s Kevin Garnett, playing himself. Garnett has a commanding screen presence, dominating each scene he’s in as he becomes more and more obsessed with the black opal. It’s the best basketball performance in a half-decade, the funniest cameo in a decade, and a new high bar for celebrity cameos.

Uncut Gems is a fascinating, entertaining piece of filmmaking that will only grow in esteem going forward. Just how good is it? Even I, an admitted Adam Sandler and Safdie agnostic, am dazzled by the filmmaking, if not wholeheartedly in love. It’s a great piece of experimental filmmaking that possesses a great ensemble, great editing, and just generally great filmmaking. As a student of the 70s who wants more directors to push the envelope narratively and technically, I can’t help but imitate Kevin Garnett: staring in marvel until I lean to hard on the glass.