‘Valerian And The City Of A Thousand Planets’ Review

HomeReviews‘Valerian And The City Of A Thousand... 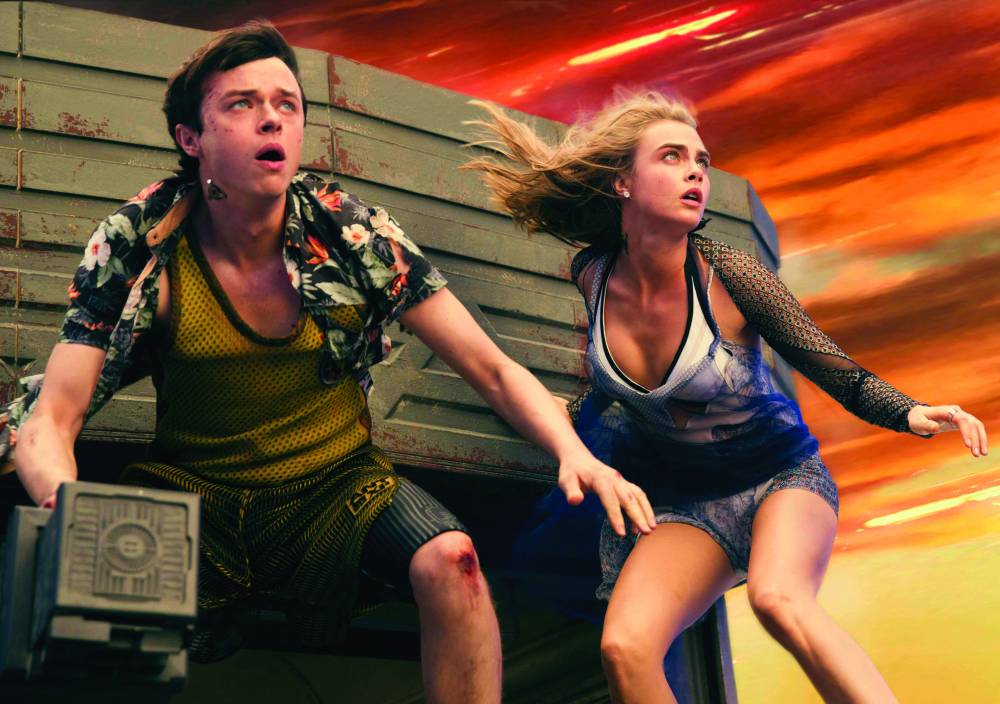 I’m honestly not sure how to make heads or tails of Valerian and the City of a Thousand Planets. It’s a different kind of filmmaking altogether, and I’m not sure that’s necessarily a good thing. Director Luc Besson likes challenging his audience by combing filmmaking of the highest caliber with the broadest, lowest themes possible, and while that can sometimes be successful, like The Professional and The Fifth Element, or a mixed bag like Lucy, it oftentimes creates an odd Frankenstein’s monster of ideas and images, both pleasing and off-putting to the audience. I guess the best analysis is that if you combined some of the best and worst filmmaking of the year, this is the result you’d get.

Based on the popular French comics of the same name, the film takes place in the 28th century. The International Space Station has taken on beings from every known planet, creating a planet-sized center for a thousand different races and species. Two of their top Federal Agents, Major Valerian (Dane DeHaan) and Laureline (Cara Delevigne) are called upon to protect Human Commander Arün Filitt (Clive Owen) as they discuss the threat of a nuclear contamination site. However, strange alien creatures attack and kidnap the commander, launching the duo on a world-hopping journey filled with strange alien creatures, supposedly non-existent species, and a secret that someone wants to keep hidden.

Let me try to recreate the experience of seeing this movie for you by breaking down the plot. The first twenty minutes of this film are some of the most spectacular I’ve seen all year. The film opens by showing 300 years of history in a small montage, set to David Bowie’s “Space Oddity.” We watch as different countries from around the world meet on the International Space Station, bonding despite their differences, and creating a society. Soon, different alien species begin to arrive, and the station grows larger and larger as each species begins living in harmony, before they are forced out of Earth’s orbit to traverse the universe safely. It is truly one of the greatest scenes of the year, showing an optimistic future where everyone, regardless of race, creed, country, or species can come together in brotherhood for a better tomorrow. Hell, I’ll go one step further: thematically, directorially, and effects-wise, this is some of the best filmmaking of the year. And the next is even stronger, as we watch Avatar-like creatures in a stunning CG world interact and start their day. It’s new, it’s different, it’s bizarre…it’s everything we expect in a Besson film. And when this world is faced with nuclear holocaust, it’s a striking, tragic visual. If you’ve gone into this movie having read the reviews, mine included, you’ll be wondering, “How did this get a mixed response? This film is absolutely stunning. This is the best of the year.”

And then you meet the main characters. And all that fun you were having stops dead in its tracks. I use no hyperbole when I say that the titular Valerian and his co-lead Laureline are two of the most boring, unlikeable, obnoxious characters ever to be put on film. I can’t tell if the writing is to blame, if the otherwise decent DeHaan and Delevigne are given rotted wood performances, or some combination of everything, but anytime these two are onscreen, and especially when they try to act like a couple (Sean Hannity and Alan Colmes had better romantic chemistry than these two), the film grinds to a screeching halt. And unfortunately, these two are onscreen for the other two hours and ten minutes of screen time. After we meet these two human versions of Valium, the film’s plot quickly goes off the rails. It’s almost like the film has ADHD – it will introduce a plot, add a detour, spend twenty minutes on that detour, add another detour, follow that for twenty minutes, and so on and so forth until you finally get to the ending and remember “Oh yeah. That was a plot point.” And you’ll be kind of distracted along the way, because the effects are gorgeous to look at, and the whole thing feels rather impressive, but you’ll mostly just be confused about why anything is happening. The most shocking part of the movie comes when Clive Owen reappears at the end, as the third most important character in the film, after being offscreen for almost two hours. Nothing in this film connects together, and it’s almost painful to try to connect the pieces.

However, if the entire point of this movie is to travel to whatever the f*ck that third act is, maybe it would have been better if they’d stayed on the journey. Because g*ddamn, the third act of this movie is terrible. It’s difficult to put into words how piss-poor this third act is, but I will do my best to help you make a proper judgment. Everything in this movie has been building to a series of five or six mysteries, introduced early in the film and then quickly forgotten. Luckily for us, everything is explained in one quick, boring monologue that honestly would have made for a more interesting movie than anything we’ve seen thus far. Every mystery is explained with a dumb f*cking answer: the reason that Valerian could understand the strange aliens? The alien princess from twenty years ago bonded with his soul for two weeks. Why was everyone after the two MacGuffins? So they could rebuild their planet. What was the bad guy’s big plan? Spending twenty years and ridiculous amounts of manpower to cover up a massive error that would in no way be kept secret. The film introduces a plot point in the last twenty minutes that is supposed to build to a big twist: that Clive Owen has been the villain the whole time. Except there are three problems with that: first, we haven’t seen him for almost two hours, so we’ve stopped caring about his character; second, the first time we see him in the film, we hear ominous music, basically telephoning the eventual twist; and third, the flashback that reveals his big secret very clearly uses his voice. There is no foreshadowing or buildup to this twist, and yet they still expect us to be shocked. It’s like if in Star Wars, the first scene is a man holding baby Luke and saying “I will name my son Luke” and it is very clearly James Earl Jones’ voice, and they still expect us to be surprised when he says “I am your father.” That’s not a mystery, that’s just dumb filmmaking. Oh, and don’t get me started on the fact that Cara Delevigne has a monologue on love. If there’s one thing I hate in movies, it’s when the main character gives a monologue on the science of love. It’s my biggest pet peeve, and it almost ruined Interstellar for me. So if it almost ruined a movie that I legitimately liked, imagine how angry I become when I have to hear it from a movie I’m already checking out of. There are about fifty more reasons the third act of this movie is complete sh*t, but I think I’ve effectively made my point.

If there’s one thing that bugged me more than the meandering plot and the third act (well, ok, not as much as the third act), it’s the ridiculous dialogue. Now, I like my cheesy dialogue in movies, especially the way Luc Besson does it. Sure, Lucy’s dialogue is kind of dumb-bad, but he has a way of making bad dialogue sound like art in The Professional. Unfortunately, the dialogue here isn’t even dumb-bad. It’s just bad. You almost have to do a double take when John Goodman shows up for one brief scene to half-assedly mutter the line, “I will find you, Federal Agent Valerian. I will find you, and I will kill you.” I’m not sure how much I can blame Goodman for half-assing that line, because I’m not sure anyone could make it sound good. And it certainly doesn’t help that this plot is then abandoned and never mentioned again, despite sounding kind of important. However, that’s nothing to a line coming in the aforementioned exposition monologue, which tries to sum up the entire movie. An alien creature during this sequence is describing his people’s arrival at Alpha (the International Space Station mentioned above) and says, and I quote: “It is truly a city of a thousand planets.” Go f*ck yourself. Look, Besson, you can say whatever dumb things you want in your movies. I will sit through every dumb line about humans using 10% of their brains or Gary Oldman ranting about “bringing me EVERYONE!” if you never put the title in your film ever again.

As for the performances, you can expect the usual from a Luc Besson film, meaning that every actor is incredibly dry and understated, or VERY BIG. There’s no in between. I’ve already established that DeHaan is truly atrocious, but I will give Delevigne some credit – she certainly fares better than the titular character (except when she’s giving a monologue on love). Owen is perhaps the most reigned in of the entire cast, and it’s a little disappointing. It makes the usually-great actor feel wooden in comparison. Personally, I prefer the actors who chose to go BIG, with nothing resembling common decency, logic, or self-respect holding them back. The biggest example of this is Ethan Hawke, who shows up for ten minutes as Jolly the Pimp, in one of the most bizarre roles in the film. Nothing about his scene fits in with the rest of the film, makes sense, or exists in this realm of existence, and yet it was one of my favorite parts. The same goes for unknown Eric Lampaert, who had a small scene as tour guide Thaziit. Once again, his role doesn’t matter in the grand scheme of things, and I don’t know what plane of existence he’s living on, but watching him go Big with a capital everything is just such a joy, it makes me wish more of this movie was like that. I also want to give some love to Rihanna, who plays Bubble, a shape-shifting blob stripper in one of the film’s most interesting scenes. Oh, and while they aren’t necessarily great actors, and their scenes don’t matter at all in the long run, kudos to Besson for casting Rutger Hauer as the President of the World (no, really) and Herbie Hancock as the Defense Minister. That’s just great casting.

I honestly don’t know if I recommend this film or not. Certainly the effects are worthwhile, and those first twenty minutes are some of the most stunning in any science fiction film, ever. There are even a few scenes throughout that could be worth a watch. However, I don’t know if I can subject any living creature to DeHaan’s “acting” in this film, or his horrid attempts at chemistry with Delevigne. I guess if you’re flipping through channels one day, it could be worth the watch on FXX. However, make sure you turn it off before that final act. Because God, is it terrible.

Tags: Luc Besson, Reviews, Valerian and the City of a Thousand Planets