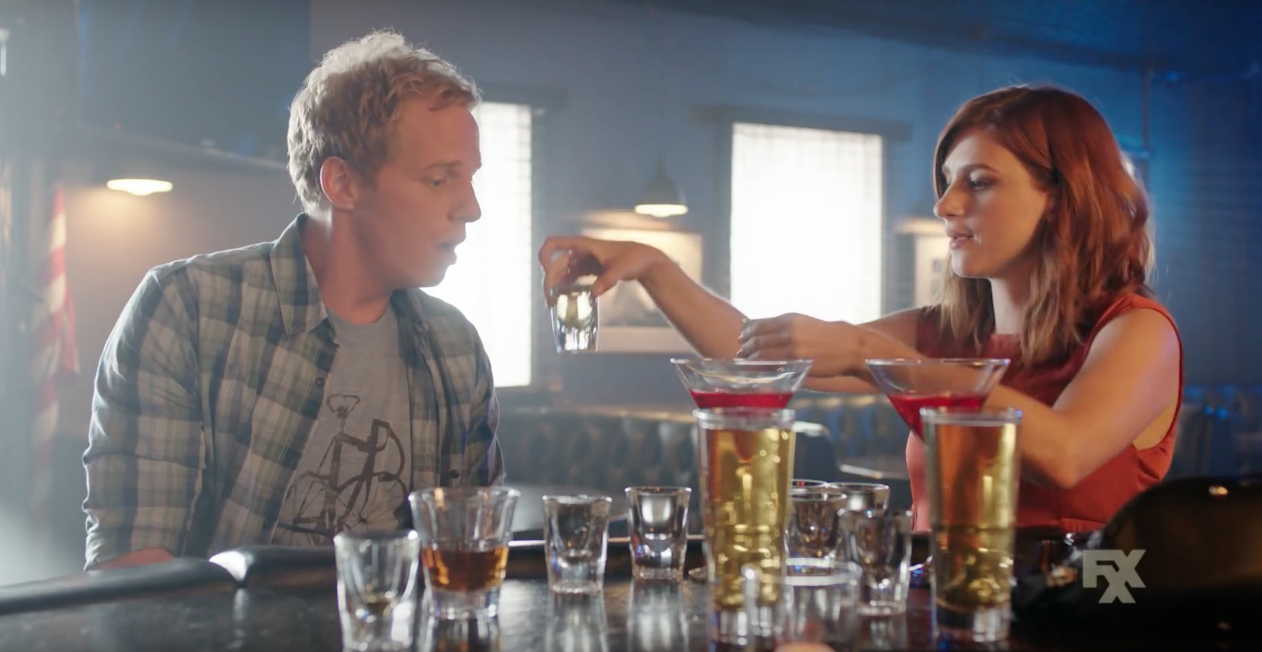 Author’s Note: I’ve been considering breaking into the television recap game for some time. With the release of this season of You’re the Worst, I decided now would be the best time to start. I’m not sure how many shows I will be doing this for, but I can promise that I’ll be doing them for all of my favorites. I should also point out that these recaps will be slightly spoiler-y. I’ll try not to give everything away, but if you wish to go un-spoiled, you can skip to my grade and see my general thoughts. Enjoy!

When shows begin to pick up steam after a stellar second season, it tends to be difficult to rebound. I really enjoyed BoJack Horseman, but it never reached the heights of its earlier seasons, and it took four episodes to find its groove. The most recent season of You’re the Worst, FXX’s anti-romantic comedy, coming off a subtle, sweet season two finale, decides to open the door with a breach charge, blowing everything to shreds in one fantastic, all out blow. If we get an entire season like this, then we are witnessing a truly special show.

A brief recap to catch you up to this point: the show follows the dysfunctional relationship of Jimmy (Chris Geere, who can deliver wicked one-liners and deliver award-worthy reaction shots with the best of them) and Gretchen (Aya Cash, who may be the best actress on television right now), who meet at the wedding of Jimmy’s ex-girlfriend. He shows up to ruin it, she shows up because she’s best friend with her sister Lindsay (firecracker Kether Donahue). Jimmy and Gretchen hook up, and have a distinct connection, but are both jaded when it comes to the idea of love. They decide to give things a try, realizing they can’t get hurt if they realize it’s doomed from the start. They get into a series of misadventures with Lindsay, who takes her nerdy husband for granted until he leaves her for a girl closer to his heart, and Edgar (sad sack Desmin Borges), Jimmy’s live-in housekeeper, an Iraq War vet suffering from PTSD. Have I pointed out that this is a comedy? Eventually the two move in together, and season two focuses on the way their relationship handles Gretchen’s clinical depression. She sinks further and further, and Jimmy struggles to handle it. Eventually, Lindsay discovers she’s pregnant with her husband’s child, winning him back but at the cost of her freedom, Edgar moves in with an improv comic named Dorothy, and Jimmy convinces Gretchen to seek help for her depression. The season ends with the revelation that, when blackout drunk Jimmy tells Gretchen the three little words.

Season three’s episode “Try Real Hard,” opens with our two lovers at their most naked. I mean this both figuratively and literally, as this is the most open and comfortable they have ever been, and also they are in the middle of passionate sex. They have an incredibly sweet, yet humorous and graphic, moment involving, erm, simultaneous climax. As they discuss their plans for the day, two key things happen. The first is the revelation that Gretchen doesn’t wash her legs, a fact that absolutely baffles Jimmy. The second is that Jimmy refuses to say “I love you” a second time, not believing he ever said it. As he tells Gretchen, “I might also have said ‘I don’t have a problem with your pubic hair.’ Or that ‘I’d help Edgar with his resume.’ Doesn’t mean it’s true.’” So they each set out on a mission to achieve a personal victory: Gretchen wants to get Jimmy as drunk as possible so he’ll express his love again, and Jimmy wants to find out what else he doesn’t know about the woman he lives with. The list, Cash’s rapid-fire delivery, and Jimmy’s baffled reactions are a thing of beauty. At the end of this list, Gretchen tries to trick him into expressing his feelings. He does, only to follow it up with “Psych. Nice try, dummy. I’ve had five shots. I could fly a plane after five shots.” God, this show is the best.

Unfortunately, their quests are put on hold, as Gretchen has a work emergency. You see, she is the publicist for an Odd Future-style rap trio, led by the Frank Ocean-esque Sam Dresden (the best side character outside of 30 Rock, played indelibly by Brandon Mychal Smith). Sam is a work of art, balancing philosophical musings on life and love alongside his rap persona, calling everyone whose name he can’t remember “bitch,” regardless of race, gender or sexuality. The group has recently recovered from a feud, and they want to put on a secret concert to reunite. Despite the several demands that there be no publicity, they change their tune when they realize that this means that no one will know. In an act of desperation, Gretchen charges across the street, and, speaking perfect Spanish, offers a Spanish service $30 to head for the concert after mass. Well, that and a litany of other accidentally (?) offensive phrases. Outside, an astonished Jimmy questions her about these things he doesn’t know, and that’s when the episode becomes brilliant: Jimmy’s fear of saying “I love you” and fear of the unknowable are related. He realizes that Gretchen may as well be a stranger to him, and he needs to know everything, because without knowing everything about her, he’ll feel like he failed, thus making “I love you” a promise he can’t keep. And that’s when Gretchen delivers the line of the episode, and the honest truth at the heart of You’re the Worst: “If I love you is a promise, it’s a promise to try real hard. It doesn’t mean you can’t fail.” It’s a bold, yet honest take on the l-word. People think that love means having this perfect relationship, and that nothing will ever go wrong. But that’s not true: at best, you fail your partner as little as possible, and you fight as rarely as possible. All you can do is try your best and hope that things will work out. And that’s what Jimmy and Gretchen have finally realized: that all they can do is try their best, and hope it works out for the two of them. The two prepare to “try real hard” as they enjoy Sam’s show, which is honest to God one of the greatest television moments of the year. Watching the absolutely vulgar, yet oddly well versed, lyrics dropped upon an audience of mostly children is a work of art, and the perfect capstone to Jimmy and Gretchen’s plotline.

Now let’s move on to Poor Edgar. We are reintroduced to Edgar and Dorothy as Edgar as they are fooling around, in what may be the worst sexy scene in the history of the art. Edgar is into it, but Dorothy’s growing tired of not taking their relationship further. However, the reason for Edgar’s dodgings are darker than normal. His new PTSD pills are affecting his ability to maintain an erection. Jimmy is of no help, just listing off a hilariously long list of fetishistic roleplay scenarios they can try out. Dorothy is down, as she is in an improv troupe (thus continuing the show’s crusade against the style), but this just makes Edgar feel worse, leading to this painfully hilarious exchange:

Eventually, Edgar decides that Dorothy is the most important thing in his life. A touching notion…except he then dumps all of his PTSD medication down the toilet. It’s going to be interesting to see that plotline play out over the season, and how it relates to the show’s ideas on love and healthy relationships. But for now, let’s let Edgar and Dorothy have their moment. And presumably, lots of sex.

And finally, for the most twisted plotline in the episode, Lindsay. Lindsay is supposed to be elated that she has won back her husband, but she is starting to remember that Paul is the most milquetoast man in history. However, he seems to be willing to try, even throwing his lame tandem bicycle into traffic (the image of Paul gladly walking away as cars screech to a halt around it is an instant classic), and promising a gift for Lindsay. Unfortunately for her, it is not anything alcoholic, sexy or remotely fun, but instead a Red Napkin (a take on Blue Apron) packaged, preordered for up to a year. This way, they can do everything as a family. The duo starts preparing dinner, with Lindsay chopping mushrooms as Paul rambles on and on about how they’re going to do everything as a family from now on, and they will never separate, and everything will be perfect, and how their entire future is planned, all while Lindsay chops and stares at an image of an elderly couple bird watching. It’s an uncomfortable sequence to watch, as the feeling of claustrophobia and paranoia fills each moment. Remember, this is a woman who once responded to “Love is putting someone else’s needs above your own” with “Ew.” She can’t handle this kind of pressure, and it’s becoming unbearable even to us, the “better people.” You just start rooting for her to do something, anything, to escape Paul yet again.

But you don’t want her to stab him. Which is what she does.

It’s unclear whether the final few moments of the episode are a dream sequence or reality, but I’m leaning towards the former. And as unbearable as Paul was this entire episode, the image of Lindsay straight up shanking her husband in the side, right between his most vital organs, is an unshakable sight, made worse by Paul’s blood-curdling screams and Lindsay’s unfazed reaction. I don’t know the direction the show can go from this point, but it’s at the very least shocking, and gives a new meaning to the show’s title.

So that’s this week’s episode of You’re the Worst. And honestly, I’m incredibly happy with what I’ve been given. The episode’s funny, smart, and continues its detailed look at love in the 21st century. Sure, there are funnier or deeper episodes in the canon, and I can never be fully happy in an episode that doesn’t have Becca, and especially Vernon, but between the opening sequence, Lindsay’s final action, Gretchen and Jimmy’s talk, and a whole lotta Sam, “Try Real Hard” has proven that the show will continue to soar with the gods for at least a few more episodes. Tune in next week for Episode 2, “Fix Me, Dummy.”