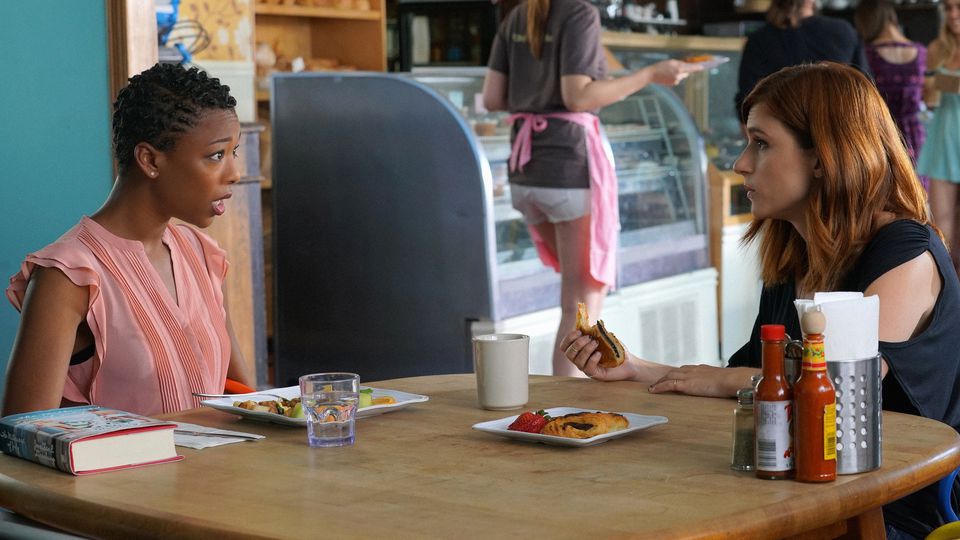 Tonight’s was a weird episode of You’re the Worst. It attempted to portray all of our characters at their titular worst, and yet still give them incredibly human moments. And you know what? It kinda worked. While the episode as a whole wasn’t as moving as the last two episodes, the performances here are some of the most honest they’ve been in a while as our show takes on the concept of grief and tragedy.

Picking up a few days after Gretchen (Aya Cash) learned Jimmy’s (Chris Geere, episode MVP) dad had passed away, Gretchen rushes to her therapist, stalking her Foursquare account and interrupting her in the middle of lunch, to find out the best way to break the news to her boyfriend. You see, she still hasn’t told him, due to a combination of fear, avoidance and just plain forgetting. Justina (Samira Wiley, on point as usual) is horrified at this confession. “I don’t like telling patients what to do, but Jesus Christ!” she proclaims. When she tries to find out why, Gretchen defends her actions, as “We’re too happy recently We’ve been boning a lot. I told him back rubs make me horny. Joke’s on him, I’m already horny.” As funny as this line is, it’s clear that it’s simply a wall that Gretchen has built to protect herself. Justina calls her on this, and she confesses her true fear: “What if he cries, and I see the sad little boy inside him?” Justina sympathizes with this notion (“Yeah, I’ve met Jimmy, that doesn’t sound like fun”). However, she forces Gretchen to do the right thing, and a disheartened Gretchen leaves to go break the news to Jimmy.

Gretchen returns home to find Jimmy in the midst of taking photos for his book’s jacket. You see, now that’s he’s flushed with cash, he plans on going “full D’Onofrio” (what an oddly specific joke. I love it). Gretchen is stunned at his sudden enthusiasm and motivation, considering “You’ve just spent months drinking and jerking it to ladies’ shoe catelogues,” to which Jimmy responds “I told you, it’s all writing.” Gretchen prepares to tell him the terrible news, but is silenced when Jimmy reveals his plans to take her on a trip-she’s immediately distracted, demanding it be a cruise, as that has been her life’s dream. Jimmy reluctantly agrees, and Gretchen rushes out, excited about her new future, as Jimmy resumes taking photos. I would advise pausing during this sequence, as each and every photo Jimmy takes is comedy gold.

Gretchen meets up with Lindsay (Kether Donahue) for a quick bite, and they catch up on each other’s lives as they raid a craft services’ table (“We’re with the network!”). Lindsay confesses the truth about how poor Paul (Allan McLeod) was stabbed. Gretchen is horrified as Lindsay goes into graphic detail on how easy it was, but she explains that her goal is to “incept” herself into forgetting the truth about Paul’s stabbing, as well as the fact that she loves her husband. Meanwhile, Gretchen expresses her problems in the most horrifically casual exchange in the show’s history:

When Gretchen reveals her plan to reveal the news to Jimmy that night, Lindsay talks her out of it, warning her that Jimmy would forever associate her with the news. They decide to leave the job to poor Edgar (Desmin Borges). Edgar is at work, and it’s clear that the lack of proper medication has him at an all time low. When they ask him to break the news, he begins to panic-he’s told many families that their loved ones have died during the war, he can’t take one more. So Lindsay develops another plan: tell Jimmy in public, or have the public tell him, so he can’t get too miserable.

Gretchen throws a book release party, inviting all of the characters on the show. This means we not only get Paul, Lindsay and Edgar, but Becca (Janet Varney), poor Killian (Shane Francis Smith), and the BEST CHARACTER ON TELEVISION VERNON!!!!!!!!!!!!!! (Todd Robert Anderson) Becca spends her time telling everyone that Vernon was hacked, and that’s why their broke, despite everyone knowing he lost it to a Financial Dominatrix, Killian tells everyone about how his dad wandered off and he’s living alone in his house, and brothopedic surgeon Vernon is showing off his “harmonica vest.” God, he’s the best. Gretchen convinces them to break the news to poor Jimmy, but they don’t think they have the ability either. Jimmy arrives, and brags about his skills as a writer and as an author. He also makes the announcement to the room that he will take Gretchen, the ““mole-lipped Lillian Hellman to my Dashiell Hammett,” that the cruise they will be going on is not just any cruise, but the “Famous Pets of Instagram Cruise,” resulting in Gretchen breaking down and weeping uncontrollably. She immediately forgets the news and declares that they will all “live forever,” and launches one of the greatest montages of debauchery seen on television. It starts out with Jimmy and Gretchen tormenting their guests, but soon others begin to join in, with Lindsay motorboating Killian and Vernon turning an IV pouch into a beer bong. In fact, the only people not enjoying themselves are Paul, whose wound keeps getting re-infected (which Lindsay can’t figure out, because she runs her fingers through it every night) and Edgar, who slowly creeps towards getting ready to blow. However, as the party reaches its pinnacle, Jimmy has a “realization”-he decides that all of these people are wishing for him to fail, and he begins to berate his guests. This starts out with general insults, but then picks up steam, going especially hard against Lindsay. Suddenly, Paul loses his normally cool demeanor, attacking Jimmy for his cruelty. Lindsay realizes that there is something to this man she can love, and that she doesn’t need to “incept” herself any more. However, this just encourages Jimmy, who leaves to get his Heckle File, which is by far my favorite character trait.

As Jimmy leaves, the group begins to argue over who should tell Jimmy the news. They all look to Edgar, who can’t bring himself to do it. So Vernon takes it upon himself to convince the poor guy. His advice starts out typically terrible, as Vernon is wont to do. But then, his advice takes a turn, stating, “Delivering tragic news is like a kind of service. Sacrificing your own comfort so they can have the gift of truth: That is true nobility.” This is the most kind and honest Vernon has been since he confessed to being born dead (which he squeezes into his speech, along with referring to himself as a “well-hung baby”). Edgar decides to man up and tell his friend the truth. He goes down to Jimmy’s bedroom and finds him going through a shoebox labeled “Heckle File.” (Choice heckles: “Paul, nice It’s Pat cosplay. Edgar, I liked you better when you were writing and starring in the hit musical In the Heights. Becca, Heaven must be missing an angel, because an angel saw your stupid face and blew its brains out”). Edgar begins to tell Jimmy about his father, but that makes him realize the truth: the reason he writes is to feel like less of a “sh*t” from his father’s treatment. He decides to call his father at that moment. Edgar goes back upstairs, defeated. It is at this point Paul snaps, and orders them all to head downstairs and stop the phone call. However, they are too late, as Jimmy is already on his father’s voicemail. Jimmy begins to prepare to destroy his father, when he pauses, and instead states, “I sold a book, daddy.” The tears well in Geere’s eyes, and a smile creeps across his face, as he realizes his dad may finally be proud of him. The gang leaves, embarrassed, as Jimmy expresses his emotions openly and honestly for possibly the first time in the history of the show. The group leaves, knowing that only Gretchen can deal with this situation. However, before leaving, Vernon offers Edgar his expert opinion: “You need help.” This is a shocking moment-out of the several brilliant characters on the show, leave it to idiot assh*le Vernon to actually see a friend in anguish and offer up help. It’s a touching moment on an otherwise cynical show. Lindsay, meanwhile, confesses her love for her husband, who smiles at the news, only to immediately whine in pain. Finally, it’s just Gretchen and Jimmy. Gretchen breaks the news to her dad, who at first doesn’t understand what she’s saying. So she hands him the newspaper article. And the last minute of the episode plays out in silence. Gretchen quickly ducks out of frame, offering a consolatory blow job, the only way she knows to deal with her emotions. However, the camera lingers on Geere’s face, as the revelation rocks him to his core. It’s the best he’s ever been on this show, and it’s the most devastating Geere has ever been.

This was an odd episode of the show. It’s cynical, it’s dark, and the characters reach the worst depths they’ve gone to on this show. However, it’s also the most honest and human exploration of grief on television. Sure, these characters are the worst, but this is also the widest range of emotions they’ve ever felt or expressed. It’s not necessarily my favorite episode in the show’s history, but it’s honest, and it’s funny, and it hits each beat with expert precision. It takes a lot for a show to make you want to cry even as Aya Cash awkwardly tries to perform fellatio to avoid eye contact. The fact this show does just that earns it the title of the Best Show on TV right now.