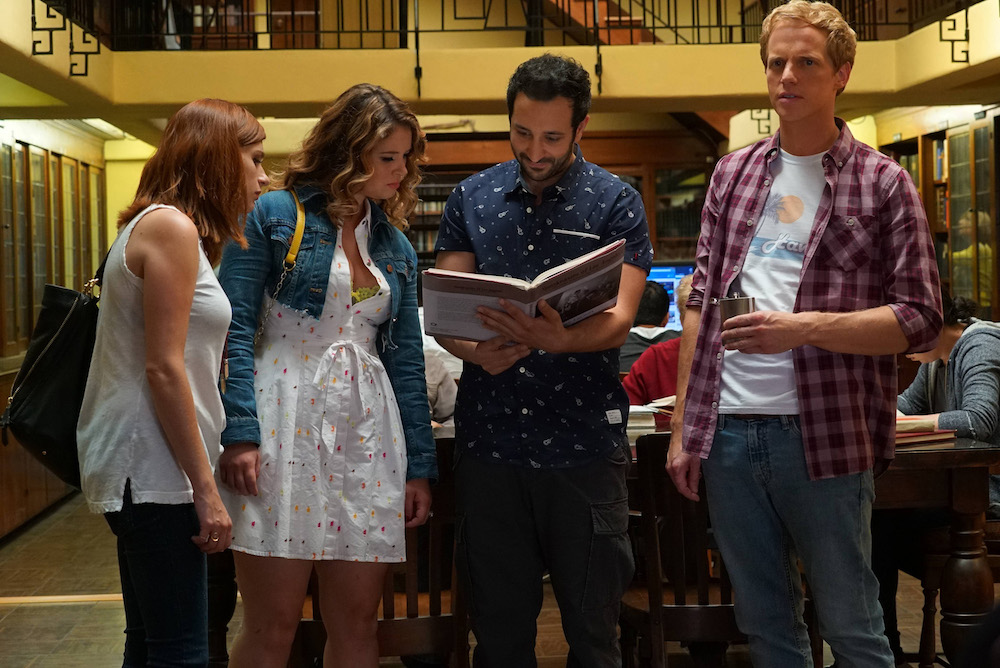 SUNDAY FUNDAY IS BACK, B*TCHES! Yes, the most famous aspect of You’re the Worst returned for what is blatantly the last time. And they use it to serve two purposes: to serve as a metaphor for growing up, and for the much simpler task of pure entertainment. And you know what? There’s nothing wrong with either style of storytelling, but when doing both has such a beautiful payoff, there’s no reason not follow that path.

For those who don’t remember, Sunday Funday is the gang’s weekly tradition of drunken debauchery. After enjoying brunch and mimosas, before engaging in a list-designed by one member each week-of activities, mostly involving drinking. As this episode kicks off, the entire restaurant is full of douchey hipsters making their own lists. Hell, even the sign outside the restaurant declares it “Sunday Funday!” Gretchen (Aya Cash) realizes that it’s no longer “cool” to celebrate Sunday Funday. Jimmy (Chris Geere) is thrilled that their lame ritual has been ruined by “corporatization,” while Edgar (Desmin Borges) and Lindsay (Kether Donahue) are both discouraged by this. Edgar in particular is crushed, because this was one of his few distractions from his worsening PTSD. When a glass breaks in the restaurant, he flinches uncontrollably. Meanwhile, Lindsay’s biggest issue is that Sunday Funday is her only escape from Paul, a sentiment which angers Gretchen-she feels that Lindsay can’t continue with her “in between” marriage; she needs to make a choice between either Paul or no Paul. Suddenly, Gretchen has an idea-realizing the days of Sunday Funday are waning, they should go all out, and she pitches a famous scavenger hunt for an exclusive speakeasy. At the mere mention of the idea, Edgar and Lindsay groan, and the annoyed Jimmy tries to leave. However, Gretchen unleashes every tool in her arsenal-she not only plays the depression card, she tries to play the Jimmy’s Dad card too (because he wasn’t using it). Edgar and Lindsay slowly give in, but Jimmy still remains steadfast-speakeasies are the “worst bar development since jukeboxes and big ice cubes.” However, after Gretchen slaps at him like a puppy dog for an extended period of time, Jimmy gives in, but demands that he stay out of it-he could care less about the clues. This declaration lasts about five seconds, as the rest of the group’s cluelessness at dissecting a website clue has a source code leading to the Dewey Decimal System-which they also aren’t familiar with, because they have never been to a library. Now knowing their location, they perform the classic Sunday Funday chant, and the game is afoot.

The gang arrives at the library, and immediately pulls out their flasks. They are mortified as they push their way through to find a man straight up watching porn in the middle of the library, but Lindsay finds this normal-she watches it everywhere. They eventually find a book on speakeasies, and flip to the page in question. Jimmy is ready to back out now-until Edgar realizes the code is in the sheet music in a photograph, which Jimmy finds brilliant. Gretchen recognizes the music as ragtime, and they realize that they only know one person who reads music. Enter Sam Dresden (Brandon Mychael Smith)! Yay! From minute one, Smith is at the top of his game as Sam, dropping hundreds of brilliant insults in a mere couple minutes. He explains that they’re all on edge because Sh*tstain has finally eloped with his longtime girlfriend Jacqueline, which is wonderful, since that relationship is one of the funniest running jokes in the show (Gretchen is thrilled, Honey Nutz not so much. Whether he’s abandoned or jealous is unclear). After observing the photo, Sam hands his magnifying glass to Jimmy, declaring, “Hold my biggifier!” He sits down at the piano and starts to play different tunes, trying to figure out which tune it is, although he refuses to join the quest, because “I am frightened by puzzles and general trickery.” While he plays, he offers his vape filled with weed to Edgar, who is mocked into smoking it by Jimmy and the gang, then mocked for giving in to peer pressure when he does. Sam eventually figures out the tune is “Happy Toes,” a jaunty tune that ironically shifts to a minor key halfway through. The gang figures out that this means a rotating sign at a foot care office, and they rush to the next location.

Upon arrival, they are stumped yet again, and harass a businessman to help them. Lindsay reminisces about Paul’s abilities with puzzles, and Gretchen points out she’s mentioned him twice, and that she has to make a choice. This results in a brutal argument amongst the friends, ending with the two declaring they are in a fight, only stopped short when a phone booth rings. A voice declares that they must “Sigh for the answer.” Jimmy deduces that they must type in “Cipher” (with the gang laughing at the number 69), and the clue leads them to the briefcase of the businessman. Once again Jimmy mocks the simplicity of the clues, but is amazed when they open the case and find photographs of themselves, along with a map. Recognizing it as a map of the train lines, Lindsay suggests that Paul can help, but realizes what she’s done. It’s too late though-Gretchen has her phone out and declares, “Beetlejuice, bitch!”

The gang meets up with Paul, who has brought Boba for everyone. Unfortunately, the gang’s greediness spills his, leaving him drinkless. Paul’s knowledge helps solve the clue, and he goes off with Gretchen and Jimmy to find the clue. Lindsay, not wanting to hang out with her husband or her former best friend, decides to catch up with Edgar. These two have always managed to be honest with each other, because they’re both self-declared “second bananas.” Edgar confesses to his PTSD problems and his rejection of the drugs used to combat it. However, he also is the most peaceful we’ve seen him in weeks, thanks to the vape he borrowed from Sam. Lindsay, meanwhile, confesses that Paul makes her want to Gone Girl herself. Edgar gives her advice, revealing that he’d avoided helping himself because it was the scariest option, so the only way that Lindsay can help herself is to do the scariest thing she can think of, which is talk to her husband. However, Lindsay can’t help but smile-as Edgar gave this speech, tons of fireworks have been going off in the background. And he hasn’t flinched once. When she tells him this, he has an idea. Buying supplies of fireworks, he takes the gang out to a field and declares his need for “Immersion Therapy.” He inhales from the vape and has Gretchen fire off all the fireworks at him. And we watch one of the most gorgeous scenes on TV this year, as the fireworks fly past and illuminate a peaceful, happy Edgar. It’s touching, it’s beautiful, and it’s perfectly scored by “It’s Time to Come Home” by The Rentals. It’s amazing and goes on for one whole minute-right up to the point where a firework hits Edgar in the throat. However, it doesn’t deter his feeling of relief-he’s found the thing that can help him find peace, and for the near future, he’s better. Yay Edgar. Unfortunately for the rest of the gang, they immediately get back to their petty squabbling, with Lindsay mimicking and mocking everything Gretchen says and Jimmy mocking the pointless quest. However, they soon get back on track, as a van parked nearby has a Snapchat code in it that opens a map pointing to the next location.

The gang feels relief as they find a house, realizing that it must be the bar. However, opening the door, they find a happy Spanish family gathering for dinner. The gang leaves dejected, and Lindsay and Gretchen finally snap, engaging in a physical fight in the street. However, as they fight, Jimmy realizes something-that family was happy. “No family is that happy. They must be actors!” he declares. Sound logic there, Jimbo. The five characters decide they must find the bar at all costs, and they charge the house. It’s one of the funniest montages in recent history, as we witness them harassing, destroying and assaulting the family, unable to find the bar. Smash cut to the group in jail. The group is depressed that they couldn’t find the bar, but immediately things don’t add up. One, they don’t put guys and girls together in jail cells. Two, no prison is this clean. Three, Edgar got to keep his vape. And finally, when Paul sits down to use the toilet, the wall rotates. Realizing they are there, the gang rotates the wall (and running into a bare-assed Paul) and finds the speakeasy, entering to thunderous applause. They immediately set out to celebrate.

Gretchen orders two Rye Manhattans, but discovers the downside of “exclusive bars”-the Manhattans are $42. They realize the place is something of a letdown. However, that doesn’t matter-Jimmy and Gretchen reveal they’d participated in the quest for each other, out of a desire for the other to be happy. It’s touching, in a weird way, but it’s incredibly nice-our childish characters are growing up. Meanwhile, Paul approaches Lindsay and asks her why she’s been avoiding her. Lindsay decides she needs to be open with Paul about her feelings, and she is-“I wanna bone other guys-physically.” Gretchen uses this as her cue to back out of the conversation. Paul is heartbroken at the revelation, but Lindsay points out that it’s the only way for her to be happy. Crushed, Paul agrees, for his wife’s happiness. Lindsay is excited, and this feels like an ironic twist on the growing up we just saw from Gretchen and Jimmy. Lindsay may feel like she’s growing up, but she has a long way to go. Meanwhile, a sloshed Jimmy dons a 1920s cap, takes the stage, and sings a rendition of “Happy Toes.” It’s not good, and he does it in a terrible New York-accent, but damn it, he’s earnest, and it’s clearly a sign of his affection for Gretchen. She watches lovingly, before she and Edgar point out that this has to be the last Sunday Funday, and the episode fades out on this melancholic note.

You’re the Worst has developed a great episode this week. Sure, it delves into the idea of growing up and giving up your childish behavior. However, it is mostly just a way to allow our characters to go on a ridiculous quest and make poor decisions. It’s funny, it’s smart, and surprisingly touching. It proves, once again, that this is the best show on TV, and while I’m sad that we’ve lost Sunday Funday, at least they sent it out with a definitive bang.