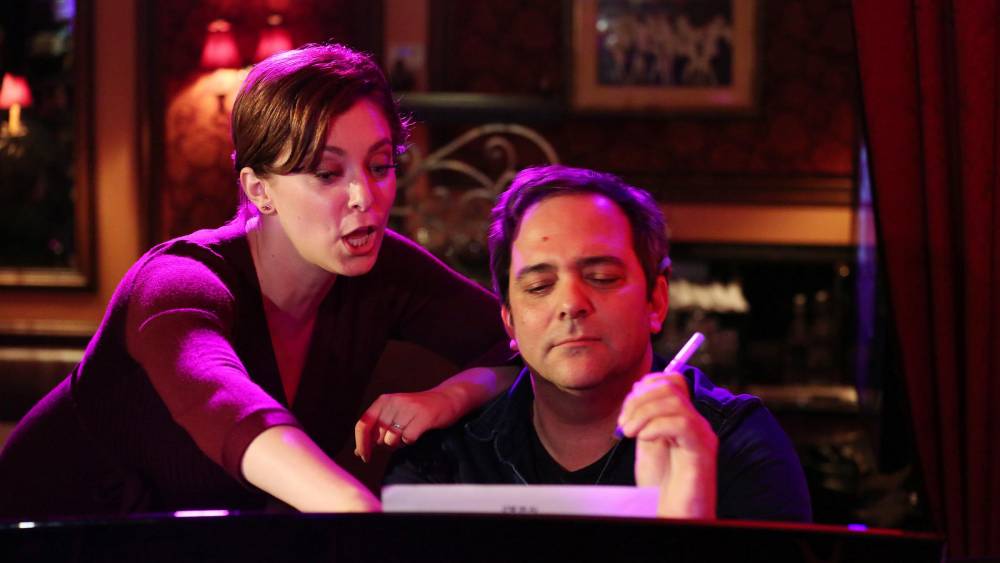 04/04/2020 Travis Burgess A Colbert Christmas (The Greatest Gift of All), Adam Schlesinger, Crazy Ex-Girlfriend, Fountains of Wayne, Music and Lyrics, Obituary, That Thing You Do! 0 Comments

It is the grim reality that I will most likely have to write multiple eulogies for this site as we begin our descent into the worst throes of the COVID-19 pandemic. I’m unfortunately aware that I will most likely have to write a few more before this entire ordeal is over. However, I didn’t expect the first death I would have to write about to be one of my major inspirations as a creator, and the voice behind several of my favorite pieces of pop culture. Sadly, that appears to be the case, as Fountains of Wayne co-creator and multi-award winning songwriter Adam Schlesinger has passed away at the age of 52 after a two-week long battle with COVID-19.

While best known for his work with the band Fountains of Wayne, who created the classic album Utopia Parkway and the hit single “Stacy’s Mom,” Schlesinger’s real talents could be found in his ability to create standalone genre pastiches, both comedic and otherwise. Perhaps the biggest demonstration of this talent can be found in his most famous accomplishment, the title song from 1996’s That Thing You Do! Schlesinger’s pop parody that is, in its own right, a truly catchy, fun song. It earned Schlesinger his only Academy Award nomination, although he would also be nominated for a Golden Globe, a Tony, a Daytime Emmy, and would go on to receive both Grammy and Primetime Emmy Awards in his storied career. After “That Thing You Do!,” Schlesinger alternated his time between producing albums for The Monkees, Motion City Soundtrack, America, Robert Plant, and They Might Be Giants and writing scores and pastiches for a variety of film and television programs. He wrote songs for everything from children’s programming like Good Luck Charlie, Sesame Street, and Bubble Guppies to adult programming such as The Howard Stern Show, Saturday Night Live, and Crank Yankers. In 2001, he helped write songs for the cult classic pop music satire Josie and the Pussycats, while 2006 saw him write the sentimental love themes, pop satires, and spot-on Wham! parodies in the underrated romantic comedy Music and Lyrics.

In 2008, Schlesinger won a Grammy for his work writing every holiday parody in A Colbert Christmas: The Greatest Gift Of All alongside Stephen Colbert. The album ranged from spot-on parodies (I listen to John Legend’s hilarious randy ode to “Nutmeg” every December) to the surprisingly earnest “Much Worse Things.” However, if there is one contribution to the pop culture lexicon Schlesinger will be remembered for, it is his collaboration with Rachel Bloom, Aline Brosh McKenna, and Jack Dolgen for the series Crazy Ex-Girlfriend. One of my all-time favorite shows, and one of the greatest works of art this past decade, Schlesinger worked with the team and spearheaded the creation of 157 comedic stylings and parodies across every conceivable genre, from grunge to pop to classic theatre to folk to rock. The songs ranged from the inherently silly (“Trapped In A Car With Someone You Don’t Wanna Be Trapped In A Car With”) to the insightful (“Settle For Me,” “Sexy Getting Ready Song”) to the honest/poignant (“You Stupid Bitch,” “The Darkness”) to the truly uplifting (“Maybe This Dream,” “A Diagnosis”). Just last year, Schlesinger won an Emmy Award alongside the rest of the writing team for the La La Land parody “Antidepressants Are So Not A Big Deal.” Each of these songs is near and dear to my heart (I ranked them all right here), and the fact that he will never gift us with another gem like this is truly heartbreaking.

At the time of his death, Schlesinger was working on two musicals preparing for a future Broadway run: a musical adaptation of Sarah Silverman’s memoir The Bedwetter, and an adaptation of the hit television series The Nanny, which he was writing alongside Fran Drescher and his Crazy Ex co-writer Rachel Bloom. Schlesinger is survived by his two daughters, Sadie and Claire. Please feel free to celebrate his life below with a collection of his greatest songs and pastiches. We really do need the joy he brought into this world in days such as these.

Tags: A Colbert Christmas (The Greatest Gift of All), Adam Schlesinger, Crazy Ex-Girlfriend, Fountains of Wayne, Music and Lyrics, Obituary, That Thing You Do!