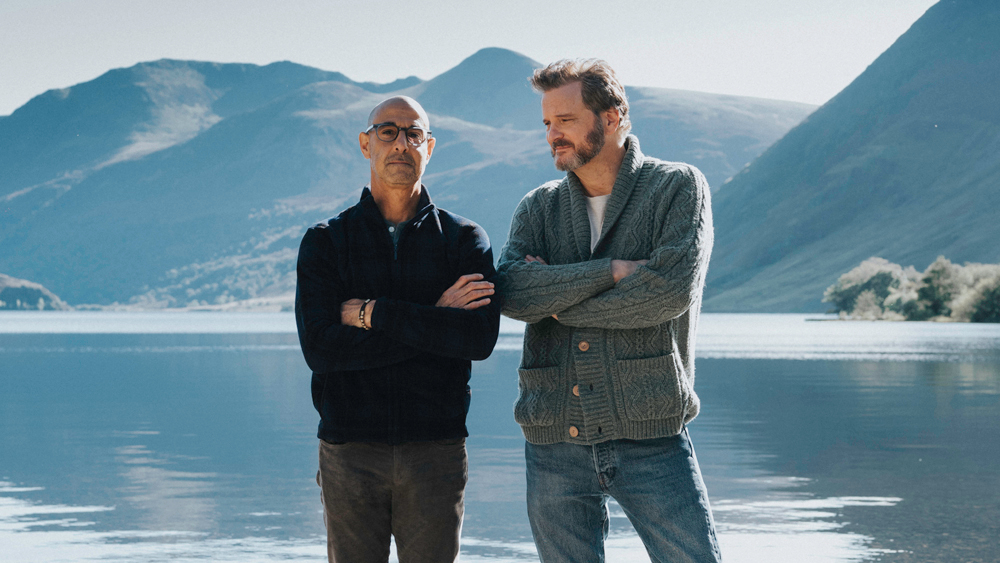 Telling a story well can really work as a salve to all sorts of issues. After all, there’s really only ten archetypes of stories, and most of them have been told in every possible way (look at Hallmark, if you need any proof). So it’s up to a competent director and a capable cast to fill in the gaps to elevate rather traditional stories to new heights. Harry Macqueen’s Supernova never provides any new twists or challenging angles in its pursuit of a straightforward story of aging, love, and mortality. But what it lacks in original ideas, it makes up for through strong performances and moments of quiet dignity.

Pianist Sam (Colin Firth) and author Tusker (Stanley Tucci) have been a couple for decades. Having reached their 20th anniversary, the two begin a trek across the English countryside in an RV, as part of a grand road trip to see their family and friends on their way to one of Sam’s concerts. However, as the journey goes on, their real motivations become apparent: Tusker is suffering from early onset dementia, and it’s unclear how much time he has left. Determined to make the most of it, the two men reflect on their own lives, their relationship, and what will become of them in their remaining time together.

Supernova’s greatest flaw is that there’s almost nothing new here. In fact, if you’ve ever seen a film about dementia – any film about dementia – then you can probably guess every single turn this film takes. You’ll be able to guess the moment a dramatic flare-up of dementia will impact Tusker during an outing to the grocery store. You’ll be able to guess when there’s a surprise family party. You’ll be able to guess exactly the wording of the multiple Big Discussions that occur as Big Decisions get made. And speaking of Big Decisions, you’ll probably be able to guess the ending by the 35 minute mark, if not sooner (I guessed it within five). It also doesn’t help that most of these moments involve obvious quotations and a mixed-bag of banter (delivered brilliantly, though, to their credit), thus forcing the obviousness to the surface. After a while, it’s hard not to ask yourself, “If I’ve seen this before, why should I bother seeing it again here?”

However, while I’m not sure I have a deserving answer to that question, I can say that as obvious as this story is, Macqueen does, in fact, tell it marvelously. And a major reason for that is his ability to trust both his characters and the magic of silence. Unlike, say, the unbearable 2014 Oscar winner Still Alice, Supernova understands that you can’t just build a film on the premise of “watch how sad this illness is.” That’s called torture porn, dear readers, and is in fact frowned upon in most societies. No, you have to build a relationship with the audience, establishing your characters as likable and relatable on their own separate from the disease, so that the disease is a detail and not the story. Macqueen, Firth, and Tucci show us who Sam and Tusker are, through loving bickering in the mountains to the humorously touching sharing of a twin bed at a family home. Even when they fight, it’s not out of anger or sadness – it’s out of love, and is wholly believable in its moment. By letting us love Sam and Tusker, it helps draw us into the story, and therefore never alienates us with the vapid details of human suffering that often plagues the genre.

Similarly, Macqueen hides his weaknesses in dialogue with clever uses of sound – and more specifically, of silence. Take, for example, the film’s opening sequence, which gives the film its name. We watch as a piano builds and builds as the stars of the universe come into focus. As the piano reaches a crescendo, we watch a supernova (i.e. the death of a star) in the distance – a star suddenly burns brightly, and then disappears from view forever. It’s the perfect metaphor for the film’s themes and story, as Tusker (who was always obsessed with constellations) prepares for his coming death after a flash-in-the-pan existence. Much of the film uses silence to drive its points home, as opposed to those screechy Oscar scenes you often see (yes, I’m still mad at Still Alice). Instead of an obvious moment at a grocery store, Tusker’s illness is revealed in silence through a car windshield as Sam comforts his confused and frightened partner. The film’s big, dramatic reveal is actually revealed in silence, letting our own intelligence fill in the blanks, even if the obvious result is then confirmed ten minutes later. Do you know how nice it is to have a film treat us as smart individuals? That’s a rarity! Supernova may not have the strongest dialogue or the most inventive plot, but it makes up for it in spades through silent connections that reach us on a spiritual, emotional level.

Of course, Macqueen’s filmmaking mainly works because of the performances from his leads. Both Sam and Tusker owe a great deal to Firth and Tucci, who imbue both performances with the personality traits that made them famous. Firth makes Sam work thanks to a return of that classic old-school Firth-iness. It’s a stuffy performance, yet effortlessly warm, in that way only Colin Firth could ever be. Similarly, Stanley Tucci provides the full Tucci charm we’ve come to know and love, ever-quick with the witty retort or loving needling of his uptight husband and those around him. As the extrovert in the relationship, Tucci breathes life into the film whether he’s talking philosophy with a child, laughing at Colin Firth performing physical comedy, or asking his sister-in-law, who’s worried about his illness, “What’s your name again?” These are two real, honest performances brought further to life by the actors’ real-life traits, and it elevates the film to heights it otherwise couldn’t reach. There are other performances worth noting, including the aforementioned sister played by Pippa Haywood, her husband played by Peter Macqueen, and a terrific child performance by Nina Marlin, but for all intents and purposes, this film is a two-hander between two highly capable leads.

Supernova is not an original film. You will be able to predict every beat from a mile away. But what it lacks in creativity, it makes up for in heart and thought and soul. This is a film where the director clearly put thought and love into every single frame, and where the actors were inspired to try in ways their contemporaries often wouldn’t. I find that remarkably beautiful. I don’t think there was enough magic here to move me to tears the way a completely original story of the same vein might (see: Dick Johnson Is Dead, or the upcoming The Father), but that doesn’t mean you won’t find something to cry over. This is a good film with flashes of greatness. And sometimes, that’s enough.